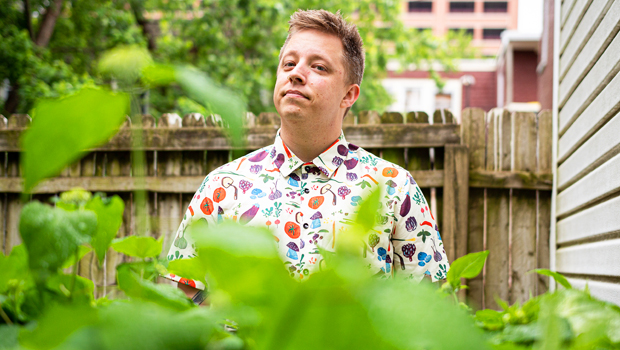 You, Me & Everyone We Know is doing ‘better than ever’ after a turbulent road to self-discovery with the release of ‘Something Heavy,’ their first album in years — and that’s OK.

If you know anything about Washington, D.C.-based indie band You, Me & Everyone We Know, then you have at least a hint of how pivotal the band’s return is. The group is back with a new album after more than a decade of, essentially, trying to get its sh*t together. Dramatic exits, struggles with mental health, and a deeper search for meaning in life have all converged and culminated in the highly-anticipated Something Heavy, the full-length project that YM&EWK frontman Ben Liebsch tells HollywoodLife is a “search for understanding, finding that understanding and what comes after.”

Bursting onto the scene with an electrifying, in-your-face tracklist featuring the band’s signature pithy lyrical style, Something Heavy gives us a lot to think about. “I don’t care, I don’t care, I don’t care anymore,” which Ben belts out in the album’s opening track aptly named, “I Don’t Care Anymore, I’m Enough Now,” lets longtime fans and even new listeners know: something important is about to go down here. Pay attention. The songs on the album are meant to smack you in the face emotionally. They’re meant to make you feel something – anything – about your own life and, if possible, relate to an experience someone else might be going through too. “Things boil down to feeling for yourself (emotionally) the reality that you are enough. There is nothing to improve,” said Ben, who identifies as nonbinary, in an EXCLUSIVE interview with HollywoodLife, adding that they hope this album (and the band itself, for that matter) provides “a weird light in the dark for all those who have been othered in life.”

It’s no secret that pain exists on the album. It’s aggressively expressed in the cheeky juvenile-like chant “I hate myself, you should hate you too” of the album’s titular song “Something Heavy” featuring Proper; in the head thrashing pop-punk beats of “Better Than I Ever Was” featuring Rivals; subtly woven into the softer-spoken “I’m still wading through the mud” chorus of “(Still) Basically a God.” Ben is clearly “going through something” from start to finish. And whether anyone thinks that’s normal or not to put out there for the world to hear, Ben is here to tell you, it is.

“It almost feels like mental health is becoming some sort of meritocracy. Let me be clear: it is not,” Ben said on the subject of mental health transitioning into a more acceptable topic to discuss publicly, but not without its nuances, even exploitative aspects at times. “I want to affirm the feelings that don’t go away with diet and exercise, with yet another book from the self-help industry, or some new tech that tells you how you slept are normal. Many of us experienced something that we shouldn’t have had to, and now we’re all walking around with the mental equivalent of a sprained ankle.”

Make no mistake – Something Heavy isn’t a cry for help. Rather, it’s an affirmation that acknowledging your trauma, accepting that trauma, and embracing the fact that it takes time to heal, time to learn about yourself, and time to allow those experiences to inform whatever changes you undergo along the way – good and/or not as good. Not to be cliché, but yeah, it’s ok to not be ok. And Something Heavy isn’t afraid to say it.