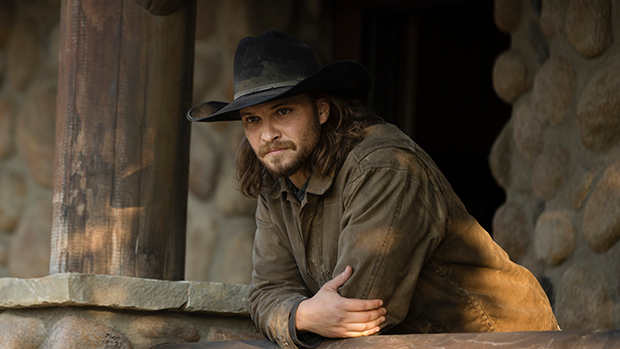 John put Jamie to the test, and Kayce made a big decision for his family during the November 21 episode of ‘Yellowstone.’ In the final moments, Jamie was left shocked over his latest discovery.

The November 21 episode of Yellowstone begins with Jimmy on his way to Texas with Travis. During one of their pitstops, he starts to write a letter to Mia, but he stops himself. He sends the checks back to Yellowstone and heads out for the rest of the trip.

Kayce and John start out the day by heading to the Rock, the place where John’s father died, where he proposed to Evelyn, and where he buried her ring after she died. John shows Kayce the file of the man, Riggins, who was hired to kill them. He still doesn’t know who hired Riggins, and that’s where Jamie comes in.

John Asks Kayce To Reach Out To Jamie

John asks Kayce to go to Jamie to get Riggins’ prison records. If Jamie stalls or resists, John will have his answer about Jamie’s possible involvement. “I just don’t think Jamie could ever do it, dad,” Kayce tells John. Kayce doesn’t think Beth is right about this one. He wonders why John can’t just sit down with Jamie. John wants to know the truth before doing that.

John uses this opportunity to ask about Monica and Tate. They haven’t been seen for weeks. John advises Kayce to work on this situation. Otherwise, Kayce is going to lose them. “I think I already lost them, dad,” Jamie admits.

Meanwhile, Jamie is taking in all the land he just bought. His father sits back and watches proudly. Jamie tells Garrett that he gave him the strength to go out on his own. Garrett replies that Jamie’s always had the strength. He just needed encouragement.

Beth meets with Caroline, who doesn’t hesitate to go toe-to-toe with Beth. “I will tear you to f**king pieces,” Caroline warns. She hints at a possible SEC investigation into Beth. But Caroline is playing the long game. She asks Beth to come work for her. If she does, Caroline says she’ll help Beth keep the ranch in Dutton hands.

Caroline is dead-set on having a destination town in every Montana valley. She asks Beth to name her price. Beth tells her that she wants Caroline’s piece of Schwartz & Meyer. Beth wants to bankrupt Bob and then fire him. “I want his grandchildren on welfare,” Beth says. That’s Beth’s price, and Caroline doesn’t immediately go for it. After Beth leaves, Caroline says, “Behind every milestone of human history stands a monster, and that’s our monster.”

Kayce goes to see Jamie, and it’s clear that there’s not a bit of intense hostility between these two. However, Kayce wonders why Jamie never came around or called after the attacks. “I have yet to stop fighting for this family,” Jamie tells Kayce. He’s the one who set up police protection at the hospital for John and prevented an investigation into the murders at the ranch. Jamie is the reason no one is in prison. He says he couldn’t stop by or call because that would be collusion, and also because of Beth. “He hates me because of her,” Jamie tells Kayce about John and Beth.

Kayce pulls out the file on the man who organized the hit on the family. He tells Jamie that John wants to know more about Riggins and possibly interview him. Initially, Kayce offers to do it, but Jamie stresses that this has to be by the book. Kayce says that John wants Jamie to do this.

“He wants me to do it?” Jamie asks. There’s a brief look on Jamie’s face that proves he still yearns for John’s approval. Kayce replies, “Yeah. Only people you can trust is family.” Jamie tells him, “Of course I’ll do it.” As Kayce leaves, he tells Jamie that he loves him. Jamie responds back with the same words. When Kayce reports back, he tells John that Jamie didn’t hesitate to help.

Kayce has one more job to do, and that’s talk with Monica. He asks her if she really hates him. “If I hated you, I would have left,” Monica says. Kayce knows that Tate and Monica are never going to get better staying on this ranch. He offers to move with them to her father’s place for a while. Monica’s mood changes instantly. She hugs him and immediately starts packing.

Kayce tells John that he’ll be back in a couple of days and that this isn’t permanent. He’s just doing what is best for his family right now. John looks incredibly sad as Kayce leaves the ranch.

Tensions on the ranch come to a boiling point when Lloyd and Walker get into a nasty fight at dinner. Rip is talking to Carter in the stables when he hears yelling coming from the bunkhouse. When Rip walks in, everyone looks terrified. Rip punches Lloyd so hard and throws him across the table. He tells Walker that there is no fighting on this ranch. If he wants to fight, he can fight Rip all day.

Beth sits down with her dad and tells her about Caroline’s Market Equities job offer. She’d be overseeing all development projects in Montana. Beth admits that she made Caroline an offer that she can’t accept, but she doesn’t rule out the gig even though this is the company John is fighting against.

Beth promises her father that her loyalty is the one thing he never has to question. He tells her to do what she thinks is best. John reveals that Kayce left the ranch with Monica and Tate. He wonders why his kids have to leave to find happiness. “Because there’s no peace in this place, dad,” Beth says.

She can tell that her dad is super bummed about the whole thing. “You know what you need?” she asks. “You need some pussy.” John immediately refuses, but Beth says she’s going to work on getting him a girlfriend.

Rip picks up where he left off with Carter. Rip’s words are harsh, but they’re honest. He says that Carter has no future beyond this place, and Carter’s going to lose his last chance if he doesn’t earn Beth’s trust back.

Jamie Makes A Discovery About His Dad

Jimmy and Travis are almost to Texas, and Travis decides to give Jimmy some advice. One piece of advice is that Jimmy has to get over his fear of horses. If he doesn’t, he won’t survive at the Four Sixes. “When the Sixes are done with you, you will either spend the rest of your life horseback or you will never get on another one,” Travis says. They arrive in Texas and Travis drops Jimmy off at the Four Sixes to start the next chapter of his life.

Rip and Beth are having a moment in bed in the early hours of the morning. Rip admits that he doesn’t know when his actual birthday is. Beth decides then and there that Rip’s birthday will be September 28.

Jamie gets his hands on Riggins’ prison records. He begins to look through the files and stumbles across something that floors him. One of Riggins’ cellmates was Garrett Randall, Jamie’s biological father!