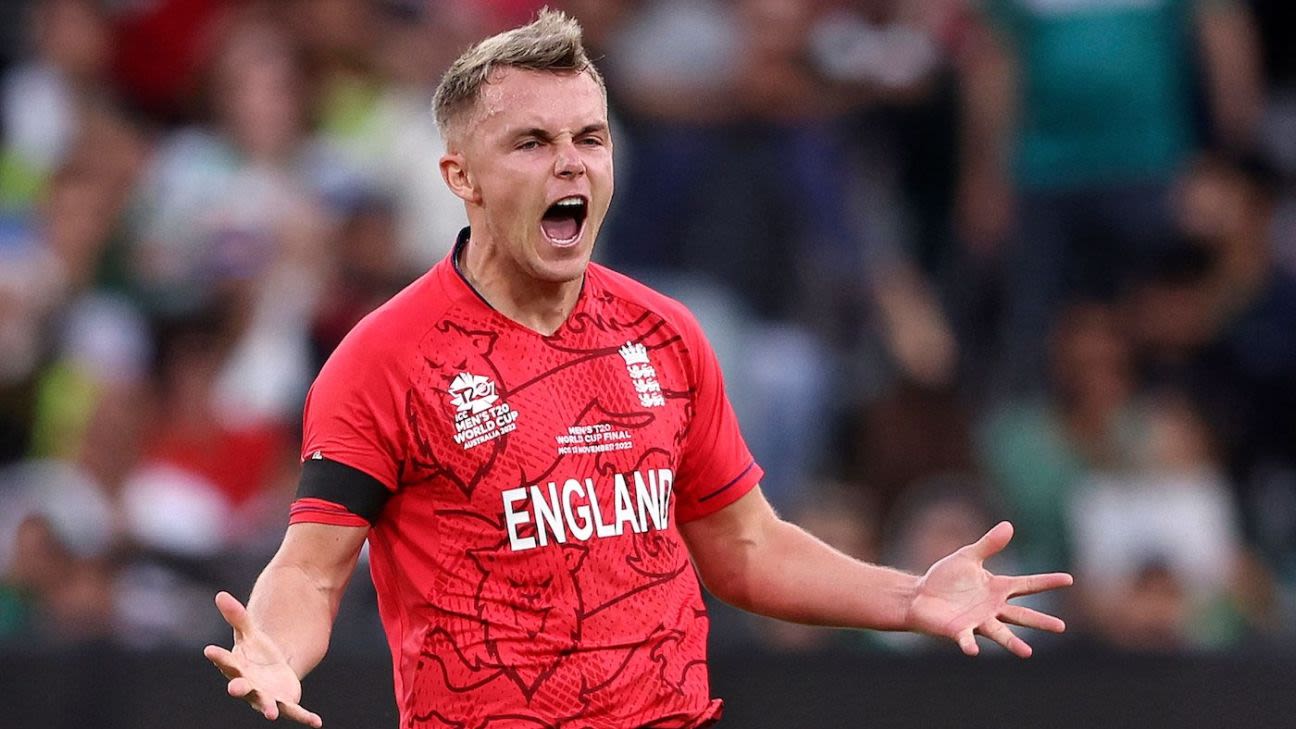 Sam Curran has admitted he spent the last few weeks of the T20 World Cup asking the relevant seven members of England’s squad what it was like to win the 2019 50-over World Cup. Along with the buzz of success after so much hard work, they confirmed being able to say you had won a World Cup, putting you in an exclusive club among English sportspeople, was a perk that did not get old. “Now to be in that position to say I’ve won one is very cool,” he said.
The 24-year-old can also let people know he was Player of the Match in the final, with 3 for 12 against Pakistan at the MCG, and moreover the Player of the Tournament with 13 wickets – joint second from just 22.4 overs – at 11.38. Depending on how well-versed the company he finds himself in, he might even let them know he answered England’s call for a death bowler in emphatic fashion.

But Curran feels the overall prize is much more satisfying. Not least because it is a declaration that makes everything that came before it worthwhile – vindicating the hard work and the tough times. For Curran, the latter was a lower back injury that ruled him out of the 2021 T20 World Cup in the UAE,

“I don’t care about the injury,” Curran declared with a smile. “I can call myself a world champion, which is pretty cool. Obviously missed the last tournament and was gutted and the guys lost in the semi-final. But there was no real talk about that this year, it was just we’ve got a job on our hands.”

Curran, though, does care. Or at least he recognises the opportunity the injury provided him. “I think I can look back at my injury maybe as a positive. I got a little bit stronger and it was the first bit of a break since I started playing.”

Part of the rehabilitation back at his county Surrey involved getting him more robust physically, leading to far more gym work than he would usually be able to do given the relentless schedule. There was also the opportunity to work on fine-tuning his action with Surrey bowling coach Azhar Mahmood, which involved working on achieving more bounce by having his arm slightly taller and not closing in on himself as he delivered the ball.

It meant when his captain Jos Buttler sat him down on the tour of Pakistan to talk about a role he saw Curran playing with the ball, which involved being able to perform in the powerplay, middle overs and at the death, he had the requisite skills to excel.

“I think maybe it was a bit of freshness and doing a little bit of work back at Surrey,” Curran said of how the break helped. “Getting a little bit stronger, working on alignment. I think that’s again confidence: when you’re playing well and feeling in good rhythm you can naturally get a bit more of a buzz towards the crease.

“These grounds in Australia are probably suited to the way I wanted to bowl and make guys hit me towards the bigger boundaries. It’s my first time playing in Australia so that’s been a great challenge and I’ve loved it because we’ve won the tournament so maybe I’ll keep coming back here more.”

In terms of inspiration as a death bowler, there was no one in particular, he said. What nuggets garnered from around him came through conversations with bowling coach David Saker and the rest of the attack. There was, however, one man Curran describes as a constant source of inspiration to him and many others within English cricket – fellow allrounder, Ben Stokes.

“When Stokesy was out there, geez…” started Curran before losing his thoughts thinking of the innings of 52 not out that eventually took England to their target of 138 with an over to spare. “He’s done it so many times.

“I’ve looked up to him for so long and, phwoar, he’s got so much guts and passion and he just does it time after time.”

There isn’t too much similar to Curran and Stokes. One looks like he’s due to hit puberty, the other looks like he’s been through it twice. But there is an overriding sense that, like Stokes, Curran has a knack for the big occasion. Maybe not as bombastically as his team-mate, but enough to consistently fulfil a role for England bowling late in the innings when batters target you most without being fazed.

“I probably wouldn’t have loved being in the middle when we needed that – he made it look very easy,” Curran responded when it is suggested he would have enjoyed the pressure of the chase. Really? “No, I probably wouldn’t!

“I’ve looked up to him [Stokes], he’s always contributing to all three phases of the game, bat, ball and in the field. That’s what you strive to to do – be there in the moment when the crunch time is. He’s done that so many times recently, that gives you inspiration and gives you confidence in the dugout when he’s out in the middle.”

Curran might not realise it just yet, but, like Stokes, team-mates and England fans alike will feel a similar comfort going forward whenever the ball is in his hand. He has more than earned that trust after ensuring he, along with this England team, can call themselves “world champions”.