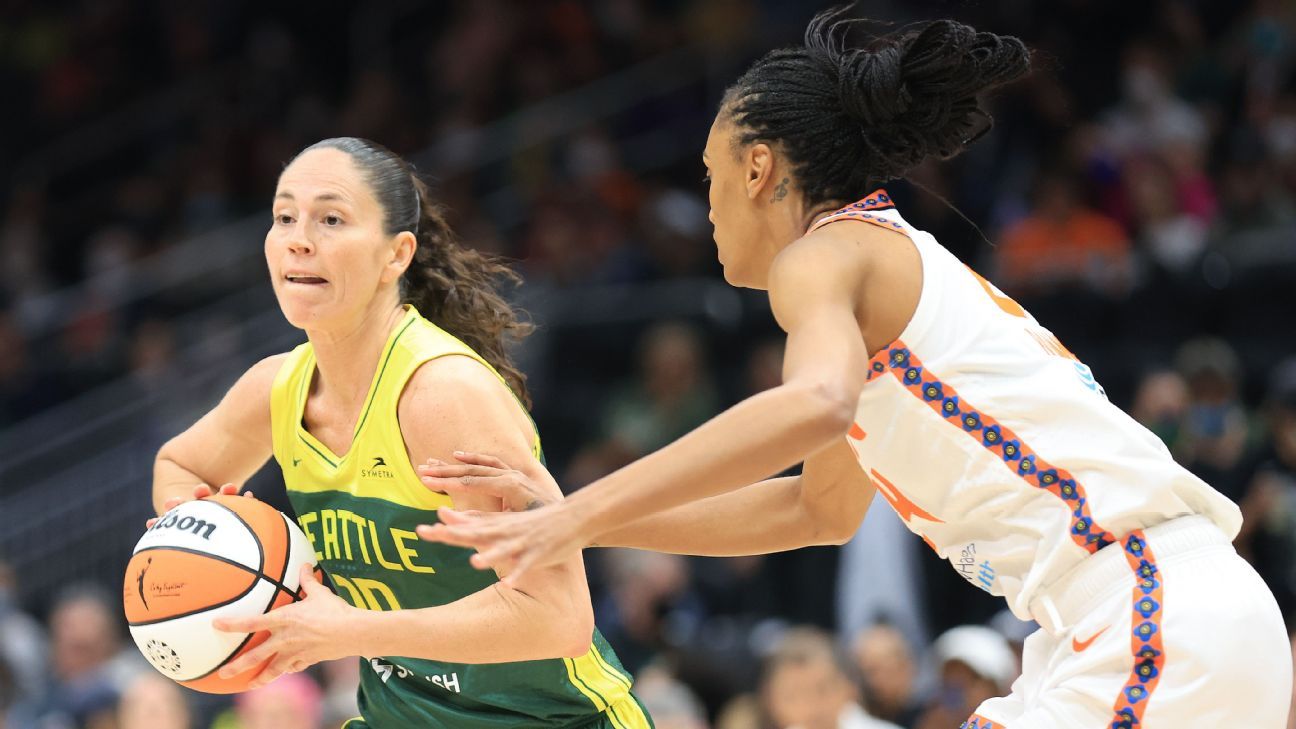 Each day of the WNBA season, our team of fantasy and betting experts breaks down every game on the slate, making note of everything from injuries and lineup changes to recent trends and more.

All odds are provided by Caesars Sportsbook. Times are ET.

Here’s what to look for during today’s slate:

Experience the 2022 WNBA season like never before with the first full-featured fantasy league game dedicated to a professional women’s sport. Get a team or start a league today!

Fantasy Need to Know: Sue Bird listed as a game-time decision tonight after missing Tuesday’s game with a non-COVID illness. Briann January (96.0% available) started in place of Bird on Tuesday but only scored three points with added four assists, one steal and made one 3-pointer. She averaged 8.7 PPG, 3.7 APG, 2.0 3PG, 1.7 RPG, in 29.0 MPG while starting for over a three-game stretch at the end of May and beginning of June. Gabby Williams (74.4% available) is coming near double-double performance (10 rebounds, eight assists) two games after she dished a season-high nine assists in a win over Wings last Saturday. Her all-around production in this span is worth some fantasy attention. Courtney Williams (21.1% available) dropped a season-high 20 points in only 24 minutes in her last outing against the Dream. She has shown upside, despite the slow statistical start with the Sun. Williams averaged 16.5 PPG, 6.8 RPG, 4.0 APG, 1.2 3PG during the 2021 season, so games like Wednesday night are definitely in her repertoire.

Best bet: Sun -7.5. The Sun have won four of their last five games at home, with an average scoring margin of +13.4 PPG. During that time span, they played the Storm in Seattle and won by seven. While the Storm are playing well, winners of four straight and eight of their last 10, the Sun are a handful in Connecticut. — Andre Snellings

Fantasy Need to Know: Erica Wheeler will miss her third straight game with a foot injury. Aari McDonald (available in 71.6% of leagues) has started her place the past two games and averaged 16.0 PPG, 4.5 APG, 2.5 RPG, 2.5 SPG and 1.0 3PG in 36.5 MPG. Nia Coffey is questionable with a knee injury after starting every game for the Dream this season. If she sits, Monique Billings (29.6% available) is worth keeping an eye on. Candace Parker played a season-low 21 minutes and scored a season-low four points in her last outing. She could be looking to bounce back with a big game against the Dream. Emma Messeman is coming off back-to-back solid performances averaging 23 PPG, 8 RPG and 4.5 APG and Allie Quigley (33.5% available) scored a season-high 16 points in her last outing. Quigley is slowly shooting her way out of her early season slump and has seven made 3-pointers in her last four games.

Best bet: Sky -9.5. The Dream have lost three straight games by an average of nine points and dropped four of their last five games while the Sky have won five of their last six games and beat the Dream by eight points a couple weeks ago in Atlanta. — Snellings

Fantasy Need to Know: Both the Wings and Mercury have experienced ups and downs this season. Dallas has averaged 80.8 PPG and 35.9 RPG while shooting 41.1% from the field. The Wings rank fourth in offensive rating (102.4), seventh in points allowed per game (81.3), 11th in opponent FG percentage (45.9%) and eighth in defensive rating (102.4). The Mercury rank fifth in PPG (81.7), sixth in RPG (20.4), seventh in offensive rating (99.9) and ninth in defensive rating (104.5). Arike Ogunbowale and Allisha Gray have been the most consistent players for the Wings and are must-start options. Kayla Thornton (72.7% available) and Isabelle Harrison (50.2% available) are viable fantasy streamers. Skylar Diggins-Smith, Tina Charles, Diana Taurasi, Diamond DeShields and Brianna Turner should all be in lineups. Don’t overlook Shey Peddy (92% available) if you need a streamer. She has scored 18 or more fantasy points in 20-plus minutes in four of her last five games. — Eric Moody

Best bet: Over 169.5. While the Wings prefer to play at a slower pace than the Mercury, this should be a high-scoring contest. Totals have gone over in four of Dallas’ past six home games and three of Mercury’s past five games. — Moody