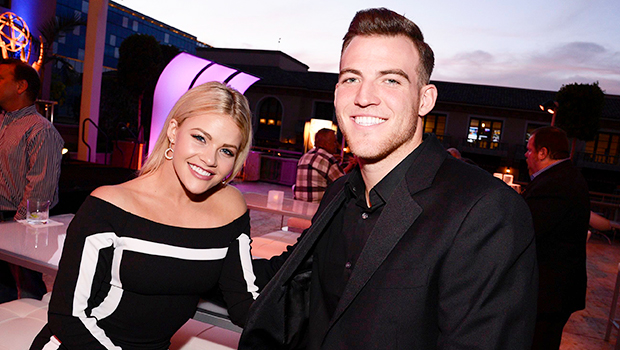 Witney Carson is having a baby! The Dancing With the Stars pro, 29, made the surprise announcement during the November 14 episode of the wildly popular ABC show. “I am so excited to finally announce that Carson, Leo, and myself are expecting baby #2,” she said during the live announcement, as both judges and audience cheered. “I’m so blessed. This just felt like a really really good time to share it. And I can finally share it, which is great!” Witney sweetly touched her stomach as she excitedly revealed the news on live TV. You can see a video clip of the joyous announcement HERE.

The announcement came as the blonde beauty stood next to dance partner for this season Wayne Brady as host Alfonso Ribeiro gave her the opportunity to share her exciting news. “Now Witney, I know that you want to share something with your Dancing With The Stars family, Alfonso said in a video clip, as a glowing Witney beamed.

Witney and her high school sweetheart Carson McAllister married in 2016 in Salt Lake City, Utah. They welcomed their first child, son Leo, in January of 2021 after what she called a ‘really hard’ 24-hour labor. Fans of the dancer took to Twitter to express their delight, gushing over her dancing skills in light of the news. “Witney is literally pregnant and still was dancing and choreographing circles around so many of the other contestants. an icon your honour #DWTS,” one Twitter user wrote.

“Lindsay, jenna, and witney [sic] all being pregnant at the same time !!!!!” wrote another, referencing Witney’s costars Lindsay Arnold and Jenna Johnson, both of whom have announced pregnancies previously. “what a beautiful blessing for the dancing with the stars family.”‘ Yet another Twitter user called the three pregnancies “just so iconic.”

Jenna and Val Chmerskovskiy announced that they are expecting their first child, due in January 2023, back in July. “Our little baby was created with a lot of love,” she told PEOPLE at the time. “It all seems so magical and meant to be.” Lindsay announced her pregnancy with husband Samuel Cusick in October. “Baby #2 coming May 2023,” she wrote via Instagram on October 24. They are already parents to 23-month-old daughter, Sage.

Hilary Duff Reveals She Suffered From Eating Disorder Amidst Teen Fame: ‘It Was Horrifying’