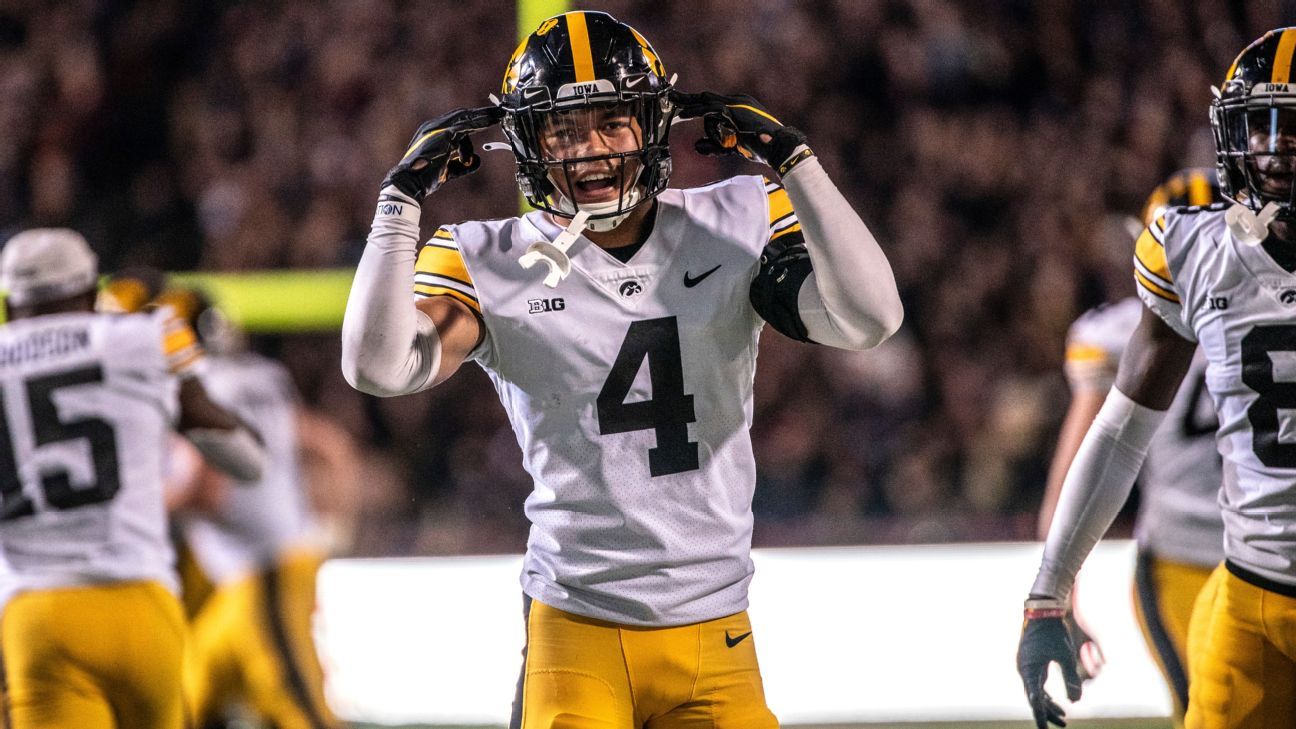 We’re not even to the halfway point of the 2021 college football season, but it seems Alabama and Georgia fans can begin making their travel arrangements to Indianapolis, or at least Atlanta.

While the Crimson Tide and Bulldogs seem like the best bets right now to reach the College Football Playoff, there is plenty of chaos behind them. Through five weeks of the season, 34 ranked teams have already lost, the most through that span in the history of the AP poll, which dates to 1936, according to data from ESPN Stats & Information. Eighteen ranked teams have lost to unranked opponents, tied with the 1974 and 2007 seasons for the most through Week 5.

So, before you completely give up on your team, keep in mind you’re not alone and there’s plenty of football left to play.

Here are some other overreactions through five weeks:

Cincinnati is a CFP contender

After taking down Indiana and Notre Dame in consecutive games, there is suddenly a widely held narrative that Cincinnati is in prime position to become the first team from a Group of 5 league to make the College Football Playoff. Maybe the Bearcats should have scheduled Purdue just to be safe.

With its 24-13 victory at Notre Dame, which ended the Fighting Irish’s 26-game home-winning streak, the Bearcats now have a 32% chance to reach the CFP, sixth-best among FBS teams, according to the Allstate Playoff Predictor. ESPN’s FPI gives them a 33% chance to finish 13-0, the highest of any FBS team. If Cincinnati finishes unbeaten in the regular season and wins the AAC title game, its chances of reaching the CFP increase to 82%.

“It’s still midseason,” Bearcats quarterback Desmond Ridder said Saturday. “We have a lot of games left to play. It honestly is a big win against a Top 10 team. I think [Notre Dame] will finish in the top 10 at the end of the year. At the end of the day, we are going to go out and play our game. Hopefully, we keep this going into Friday [against Temple] and the week after, and the week after that.”

Take nothing away from the Bearcats’ victory at Notre Dame. It’s clearly a program-defining win for coach Luke Fickell’s squad and one that solidifies its position as the best non-Power 5 team in the country (although BYU might have something to say by season’s end). But let’s not get carried away about Cincinnati’s CFP chances with more than half of the season still to play.

By early December, Cincinnati’s victories against Indiana and Notre Dame might not carry any more weight than Oregon defeating UCLA and Washington, or Oklahoma taking down Baylor and Oklahoma State. It’s too early to know. What we do know, however, is the Hoosiers are currently 2-3 and were outscored 58-6 in losses at Iowa and Penn State. They’re not very good. The Fighting Irish needed overtime to knock off struggling Florida State in their season opener, then a late touchdown to beat Toledo at home. With shaky offensive line play, the Irish were already playing with fire before falling to the Bearcats.

That’s not even Cincinnati’s biggest problem. Its remaining schedule includes eight games against AAC foes and seven of them have already lost at least two games. Navy, Tulane, Tulsa and South Florida are a combined 4-15. The exception is No. 24 SMU, which travels to Nippert Stadium in Cincinnati on Nov. 20. According to FPI, Cincinnati’s remaining strength of schedule ranks 89th in the FBS. Maybe that’s why the Playoff Predictor gives the Bearcats at least an 86% chance to win every game except SMU (76%). The AAC isn’t as good as it has been in the recent past. We’re not here to rain on Cincinnati’s parade, but a lot will have to happen for the Bearcats to reach the CFP.

Georgia is better than Alabama

With each passing week, it seems more and more likely Alabama and Georgia are on a collision course to meet in the Dec. 4 SEC championship game and the Jan. 10 CFP National Championship in Indianapolis.

The Playoff Predictor gives the Crimson Tide and Bulldogs both at least an 85% chance to reach the CFP (no other SEC team has more than a 3% chance) and FPI gives them a 24% chance to enter the SEC championship game unbeaten. Ole Miss coach Lane Kiffin might already be getting his popcorn ready for that one.

The Bulldogs have posted back-to-back shutouts of SEC opponents for the first time since 1980, the last time they won a national championship. According to ESPN Stats & Information, Georgia is the only program in at least the past 25 seasons to allow just one offensive touchdown in its first five games (it came in garbage time in the fourth quarter against South Carolina). Georgia’s athletic and deep defensive line is how Alabama used to look, and its linebacker corps is every bit as good as the Crimson Tide’s.

Even without quarterback JT Daniels, who missed the UAB game with an oblique injury and then the Arkansas contest with a lat injury, Georgia’s offense has been efficient enough. Backup quarterback Stetson Bennett IV threw five touchdowns in a 56-7 rout of the Blazers. The Bulldogs ran for 273 yards in a 37-0 rout of the Razorbacks. The offense figures to get even better once receiver Kearis Jackson and tight end Darnell Washington are fully back from injuries, and especially if star receiver George Pickens returns from a knee injury late in the season.

We’ll find out over the next month how good the Bulldogs truly are. Saturday’s trip to No. 18 Auburn is their first true road game — yes, we know they already played at Vanderbilt — and the Tigers are riding high off their first victory at LSU since 1999. Then No. 16 Kentucky, which beat Florida at home for the first time since 1986, travels to Georgia on Oct. 16, followed two weeks later by a game against the Gators in Jacksonville, Florida. No matter how poorly the Gators might have played against the Wildcats, they’re always going to put up their best fight against the Bulldogs.

Sure, the Crimson Tide had a close call in a 31-29 victory at Florida. The Alabama defense hasn’t been as efficient as Georgia’s so far, but some of that can be attributed to youth on that side of the ball. The Tide offense has been better, though, and has the potential to be even more potent with quarterback Bryce Young. Here’s the bottom line: Until Georgia actually defeats Alabama on the field, which it has yet to do under coach Kirby Smart, the Crimson Tide remain the team to beat in the SEC.

The SEC is the best conference in America again

With Alabama and Georgia pulling away from everyone else in the CFP race, it would seem pretty obvious the SEC is once again the most dominant league in the sport, right?

While the SEC has seven of its teams ranked in the AP top 25 this week, the Big Ten might actually be better through five weeks. Five Big Ten teams are ranked this week, including No. 3 Iowa, No. 4 Penn State, No. 7 Ohio State, No. 9 Michigan and No. 11 Michigan State. At this point, it might even be argued the Big Ten is just as deserving as the SEC to have two teams in the CFP — if, say, Iowa and Michigan or Michigan State are unbeaten going into the Big Ten championship game.

While Alabama and Georgia have been dominant, the rest of the SEC has flaws. No. 13 Arkansas, which was steamrolled by Georgia, is the next highest-ranked SEC team. No. 16 Kentucky is undefeated but struggled to put away Missouri and FCS program Chattanooga. Florida, LSU and Texas A&M have flopped and already have two losses.

The Big Ten, meanwhile, has four unbeaten teams (Iowa, Penn State, Michigan and Michigan State) and perhaps the best one-loss team in the Buckeyes, if they continue to get better on defense. Maryland and Rutgers are better than they’ve historically been, which admittedly isn’t saying much, and Nebraska is actually showing a pulse after falling early. Of course, we probably won’t know which league is ultimately better until the postseason, and we all know how that has gone for the Big Ten over the years.

Manny Diaz is done at Miami

I’ve always had a soft spot in my heart for Miami coach Manny Diaz, a former ESPN employee who took an unconventional path into the coaching profession. When the Hurricanes hired him to replace Mark Richt in 2019, it was a good story — a former Miami mayor’s son coming home to try to bring back the U.

And Diaz had paid his dues. After a less-than-stellar tenure as Texas’ defensive coordinator from 2011 to 2013, Diaz had to work his way back up the coaching ladder. It was during the summer of 2014, while Diaz was preparing for his first and only season at Louisiana Tech, that I came to really like him.

Back when I was still active on Twitter, or the “gutter of humanity” as I refer to it now, I took a playful shot at Diaz during, of all things, the semifinals of the 2014 World Cup. After Germany blasted Brazil 7-1, I tweeted: “When did Brazil hire Manny Diaz as its defensive coordinator?” Almost immediately, my cell phone rang. It was a call from a South Florida area code. It was Diaz, who told me he wasn’t happy about the tweet. I explained it wasn’t anything personal and it was, well, simply his turn.

Five years later, Diaz was finally a head coach at Miami. I thought the marriage would turn out well because of his ties to the community. South Florida high school coaches would love him and top recruits in the 305 would flock to Miami again. For whatever reason, it hasn’t happened.

After going 8-3 in 2020, the Hurricanes are 2-3 this season. They were steamrolled by Alabama and Michigan State and lost their ACC opener, 30-28 against Virginia, after freshman kicker Andy Borregales’ 33-yard field goal try bounced off the left upright as time expired.

Diaz may or may not be the guy who can turn the Hurricanes around. I’d argue that two and a half seasons isn’t long enough to find out. The bigger question for me is if the Hurricanes do indeed fire Diaz, who are they going to hire that’s going to be any better? Based on Miami’s track record since Butch Davis left for the NFL more than two decades ago, their chances of doing so seem pretty slim.

Has Solskjaer turned Man United around? And is he the right person to take the club forward?

Washington State football coach Nick Rolovich fired — How it happened, what comes next and more