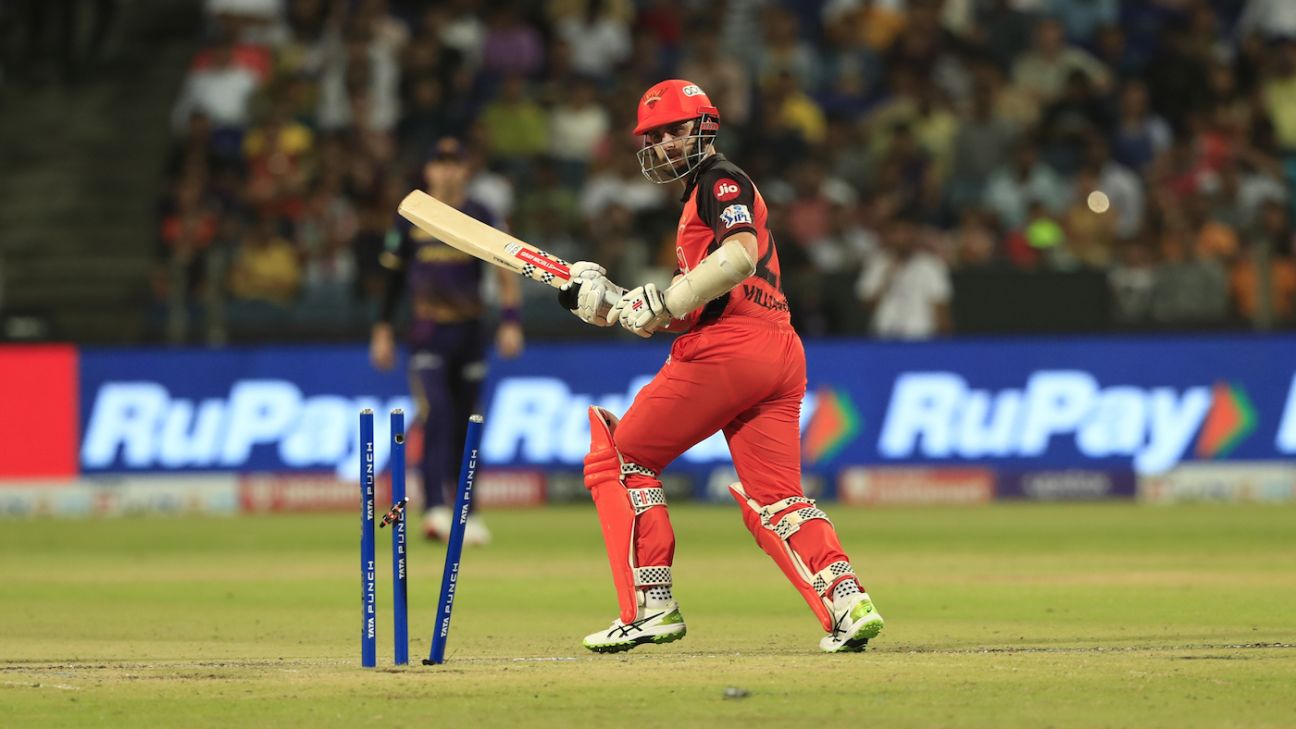 Sunrisers have other opening options in their ranks, including Rahul Tripathi and Aiden Markram, to partner Abhishek Sharma, but head coach Tom Moody said the team management was against meddling with the middle order that had been doing the job for them.

“Rahul Tripathi has batted exceptionally well at No. 3 and Markram has been one of the leading batters in the tournament at No. 4,” Moody said at the post-match press conference. “So, we felt why change something that’s working for something that’s not working.

“We have trusted Kane with his quality, there’s no question of his world-class quality. So, that’s why we haven’t made that move because as we have seen throughout the tournament where the batting has been functioning really well. That is Abhishek Sharma at the top of the order, Tripathi at 3, Markram 4 and Pooran 5.”

In a chase of 178 on a Pune pitch where some balls pitched on back of a length held up, Williamson kept finding the infielders, soaking up as many as 11 dots in the powerplay. He was ultimately bowled in the final over of the powerplay, trying to manufacture a scoop.

“There’s some consistency to it [my struggles],” Williamson told host broadcaster Star Sports at the post-match presentation. “Hit four or five [balls to] fielders and then try a bit harder and end up walking off. So, you know it’s one of those things. The game just forever teaches us lessons. So, there’s a bit of learning for me there.”

ESPNcricinfo’s experts Ian Bishop and Sanjay Manjrekar insisted that Sunrisers need to push Williamson down the order and try out other options, with time running out for them.

It was another disappointment for Kane Williamson, who only managed a 17-ball 9•BCCI

“I’ve been singing this song for maybe four-five games now,” Bishop said on T20 Time:Out. “I’m a Tripathi man because Tripathi has been [good] at No. 3 but when he comes in under pressure, he has gone slow and then a wicket falls. So, that’s neither here nor there but you can’t go with Kane at the top again for the next game or two because it’s not giving the team any impetus.”

Manjrekar suggested a more left-field top-order option: Washington Sundar. The 22-year-old had originally started his career as an opening batter for his state team Tamil Nadu before reinventing himself as an offspin-bowling allrounder in white-ball cricket.

“Instead of that, have young players coming in. Washington Sundar could be a nice opener to have. Try somebody else and make Kane Williamson the captain because you want to put trust in him as captain but as a batsman, I keep saying make him a bit redundant because of his form.”

Moody: ‘We’ve struggled for rhythm since injuries to Washington, Natarajan’
While Washington and T Natarajan returned from injury layoffs on Saturday, Moody said that their absence coincided with Sunrisers enduring a long losing streak. After winning five games on the bounce, Sunrisers have now lost five in a row and are on the brink of falling out of the race for the playoffs.

“We did get on a nice winning roll, started to play some good cricket and had everyone available for selection and then we missed a game that we should’ve won to make it six in a row,” Moody said. “Then we had injuries to Washington and Natarajan. Every team has their injuries, but they play pretty key roles for us in the side and that’s where I think we lost a little bit of confidence and also as a bowling unit a bit of rhythm to our game and method to our defence of 120 balls.

“We’ve struggled to recapture our rhythm since. I thought we were a lot better with the ball [today]. Apart from the back end, there were a few that got away but when you got a world-class hitter like Andre Russell at the crease, he’s always going to be a threat. He has done it year in and year out. So, I thought generally any total around the 170 mark was a pretty good bowling performance.”