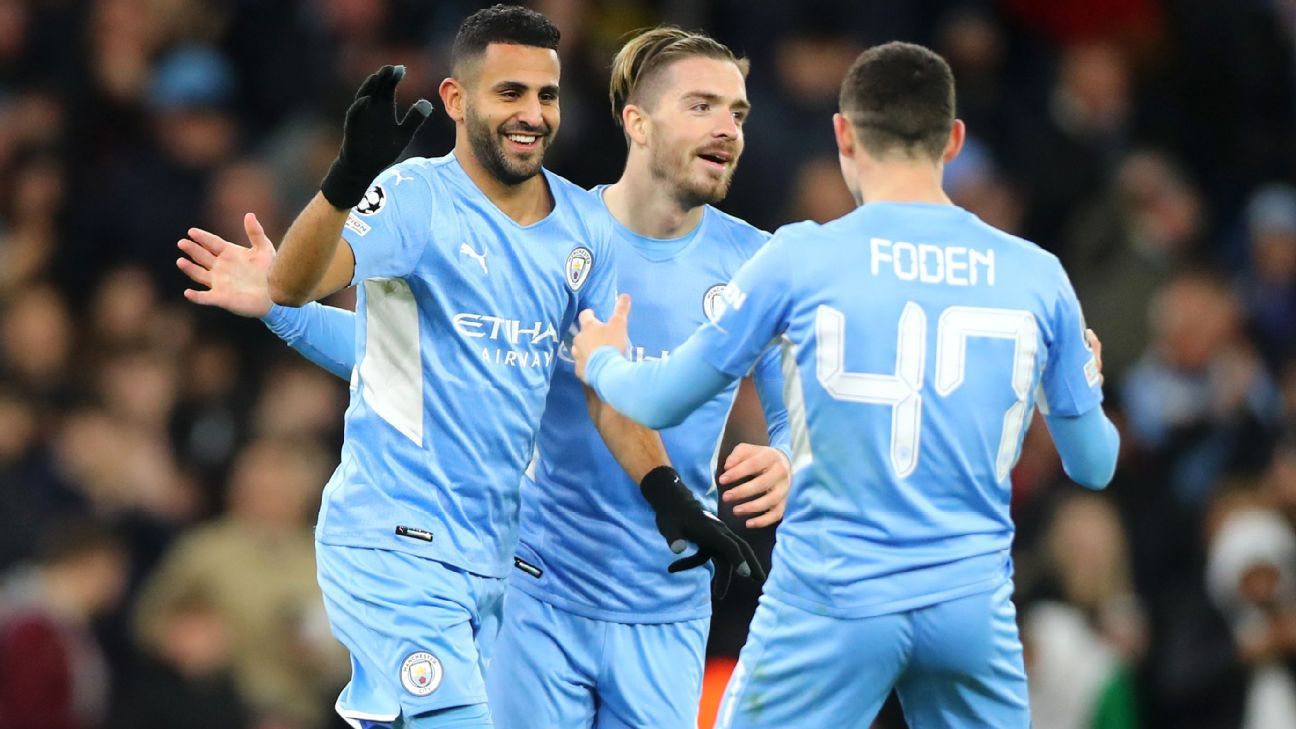 With two rounds remaining in the Champions League group stage, it’s all to play for to reach the knockout rounds — or book a consolation place in the Europa League.

Here’s the state of play across all eight groups, showing what each team needs to maintain hope of progressing.

Group winners and runners-up qualify for the Champions League round of 16, with third-placed teams dropping into the Europa League preliminary knockout round. Teams that finish bottom are eliminated from Europe.

QUALIFIED FOR UCL ROUND OF 16: Ajax, Bayern Munich, Juventus, Liverpool

Manchester City: Need a point to go through, and can secure top spot with a win at home to PSG.

Paris Saint-Germain: Will be through with two draws, or if Club Brugge fail to win either of their remaining games.

Club Brugge: Must win both their remaining games to have a chance of qualifying.

RB Leipzig: Have been eliminated from the Champions League and must win away to Club Brugge to stay in contention for a place in the Europa League.

Liverpool: Have qualified as group winners.

FC Porto: Will be through on Matchday 5 if they win at Liverpool and Atletico lose to AC Milan. Four points will also be enough.

Atletico Madrid: Know that at least a draw at home to AC Milan will definitely keep their fate in their own hands ahead of the trip at FC Porto on Matchday 6. Could be eliminated if they lose to Milan and Porto beat Liverpool.

AC Milan: Must win both their remaining games to have a chance of staying in the Champions League, but their best hope may be to edge third and drop into the Europa League. Will be eliminated completely if they fail to beat Atletico.

Ajax: Have qualified and need a point to win the group.

Sporting CP: Victory at home to Dortmund by 2+ goals will send them through to the round of 16 on Matchday 5.

Besiktas: Are out of the Champions League and will be eliminated completely if they fail to beat Ajax or Borussia Dortmund avoid defeat against Sporting.

Real Madrid: Must win away to FC Sheriff to guarantee qualification on Matchday 5, while two draws from their remaining two games would also send them through.

Inter Milan: Will be through with a game to spare should they beat Shakhtar and FC Sheriff fail to beat Real Madrid. Four points will also see them through for certain.

FC Sheriff: Will be out if they lose to Real Madrid and Inter beat Shakhtar. They may need to hope Inter fail to win and it goes down to the final day for a place in the knockout stages.

Shakhtar Donetsk: Are going to have to win both their remaining games and hope other results go their way if they to have a chance of going through or dropping into the Europa League.

Bayern Munich: Have qualified for the round of 16, and need a point to win the group (or can do so with a defeat if Barcelona fail to win at home to Benfica).

Barcelona: Will be through with win a win at home to Benfica on Matchday 5.

Dynamo Kiev: Have to win both remaining games, and hope Barca lose at home to Benfica, to have any chance of staying in the Champions League. They could yet overtake Benfica for the Europa League slot with a win in Portugal on Matchday 6.

Manchester United: Will be through with a win away to Villarreal in their next match. Four points from the two games will also guarantee progress.

Villarreal: Will definitely be through if they beat Man United by 2+ goals or 1-0.

Atalanta: Can guarantee a place in the round of 16 with two victories, and four points would be enough if Villarreal lose to Man United.

Young Boys: Still in contention but need to win at home to Atalanta to have any realistic hopes of finishing inside the top 2. If they lose to Atalanta, they are sure to finish bottom of the group and exit Europe.

FC Salzburg: Will be through with a win at Lille on Matchday 5, and that will seal top spot if Wolfsburg fail to beat Sevilla. Two draws will also send them into the round of 16.

Lille: If they can win at home to Salzburg, a point away to Wolfsburg would be enough to send them through.

Wolfsburg: Are sure to still be in contention on Matchday 6, when a win at home to Lille will guarantee at worst a place in the Europa League.

Sevilla: Will be out of the Champions League if they lose at home to Wolfsburg, and also be sure to finish bottom should Lille win at home to Salzburg.

Juventus: Have qualified, and need a point away to Chelsea to seal top spot.

Chelsea: Need a point to go through, and would also progress with a loss at home to Juve should Zenit fail to beat Malmo. Must beat Juventus to have a chance of topping the group.

Zenit St Petersburg: Must win both their remaining games, and hope Chelsea lose to Juve, to go through. Would also need to beat Chelsea by 2+ goals to win the head to head.

Malmo: Are out of the Champions League and must beat Zenit by 5+ goals to overtake them on head to head and have the best chance of finishing third and dropping into the Europa League.

Vasiliy Lomachenko can win his way back to the top at 135 against Richard Commey — but what if he loses?