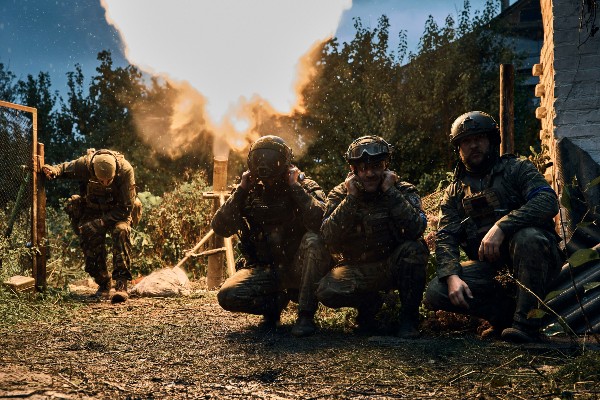 Sep 29: Tactical nuclear weapons have burst onto the international stage as Russian President Vladimir Putin, facing battlefield losses in eastern Ukraine, has threatened that Russia will “make use of all weapon systems available to us” if Russia’s territorial integrity is threatened. Putin has characterized the war in Ukraine as an existential battle against the West, which he said wants to weaken, divide and destroy Russia. U.S. President Joe Biden criticized Putin’s overt nuclear threats against Europe.

Most of its remaining stockpile, about 150 B61 gravity bombs, is deployed in Europe. The U.K. and France have completely eliminated their tactical stockpiles. Pakistan, China, India, Israel and North Korea all have several types of tactical nuclear weaponry. Russia has retained more tactical nuclear weapons, estimated to be around 2,000, and relied more heavily on them in its nuclear strategy than the U.S. has, mostly due to Russia’s less advanced conventional weaponry and capabilities. Russia’s tactical nuclear weapons can be deployed by ships, planes and ground forces.

Most are deployed on air-to-surface missiles, short-range ballistic missiles, gravity bombs and depth charges delivered by medium-range and tactical bombers, or naval anti-ship and anti-submarine torpedoes. These missiles are mostly held in reserve in central depots in Russia. Russia has updated its delivery systems to be able to carry either nuclear or conventional bombs. There is heightened concern over these dual capability delivery systems because Russia has used many of these short-range missile systems, particularly the Iskander-M, to bombard Ukraine. Tactical nuclear weapons are substantially more destructive than their conventional counterparts even at the same explosive energy. Nuclear explosions are more powerful by factors of 10 million to 100 million than chemical explosions, and leave deadly radiation fallout that would contaminate air, soil, water and food supplies, similar to the disastrous Chernobyl nuclear reactor meltdown in 1986. The interactive simulation site NUKEMAP by Alex Wellerstein depicts the multiple effects of nuclear explosions at various yields.

Can any nuke be tactical? Unlike strategic nuclear weapons, tactical weapons are not focused on mutually assured destruction through overwhelming retaliation or nuclear umbrella deterrence to protect allies. While tactical nuclear weapons have not been included in arms control agreements, medium-range weapons were included in the now-defunct Intermediate-range Nuclear Forces treaty (1987-2018), which reduced nuclear weapons in Europe. Both the U.S. and Russia reduced their total nuclear arsenals from about 19,000 and 35,000 respectively at the end of the Cold War to about 3,700 and 4,480 as of January 2022. Russia’s reluctance to negotiate over its nonstrategic nuclear weapons has stymied further nuclear arms control efforts. The fundamental question is whether tactical nuclear weapons are more “useable” and therefore could potentially trigger a full-scale nuclear war.

The U.S. has criticized Russia’s nuclear strategy of escalate to de-escalate, in which tactical nuclear weapons could be used to deter a widening of the war to include NATO. While there is disagreement among experts, Russian and U.S. nuclear strategies focus on deterrence, and so involve large-scale retaliatory nuclear attacks in the face of any first-nuclear weapon use. This means that Russia’s threat to use nuclear weapons as a deterrent to conventional war is threatening an action that would, under nuclear warfare doctrine, invite a retaliatory nuclear strike if aimed at the U.S. or NATO. Nukes and Ukraine I believe Russian use of tactical nuclear weapons in Ukraine would not achieve any military goal. It would contaminate the territory that Russia claims as part of its historic empire and possibly drift into Russia itself.

It would increase the likelihood of direct NATO intervention and destroy Russia’s image in the world. Putin aims to deter Ukraine’s continued successes in regaining territory by preemptively annexing regions in the east of the country after holding staged referendums. He could then declare that Russia would use nuclear weapons to defend the new territory as though the existence of the Russian state were threatened. But I believe this claim stretches Russia’s nuclear strategy beyond belief. Putin has explicitly claimed that his threat to use tactical nuclear weapons is not a bluff precisely because, from a strategic standpoint, using them is not credible. In other words, under any reasonable strategy, using the weapons is unthinkable and so threatening their use is by definition a bluff.

Want to do MBA in India or Abroad? Fees, Eligibility, Admission Criteria