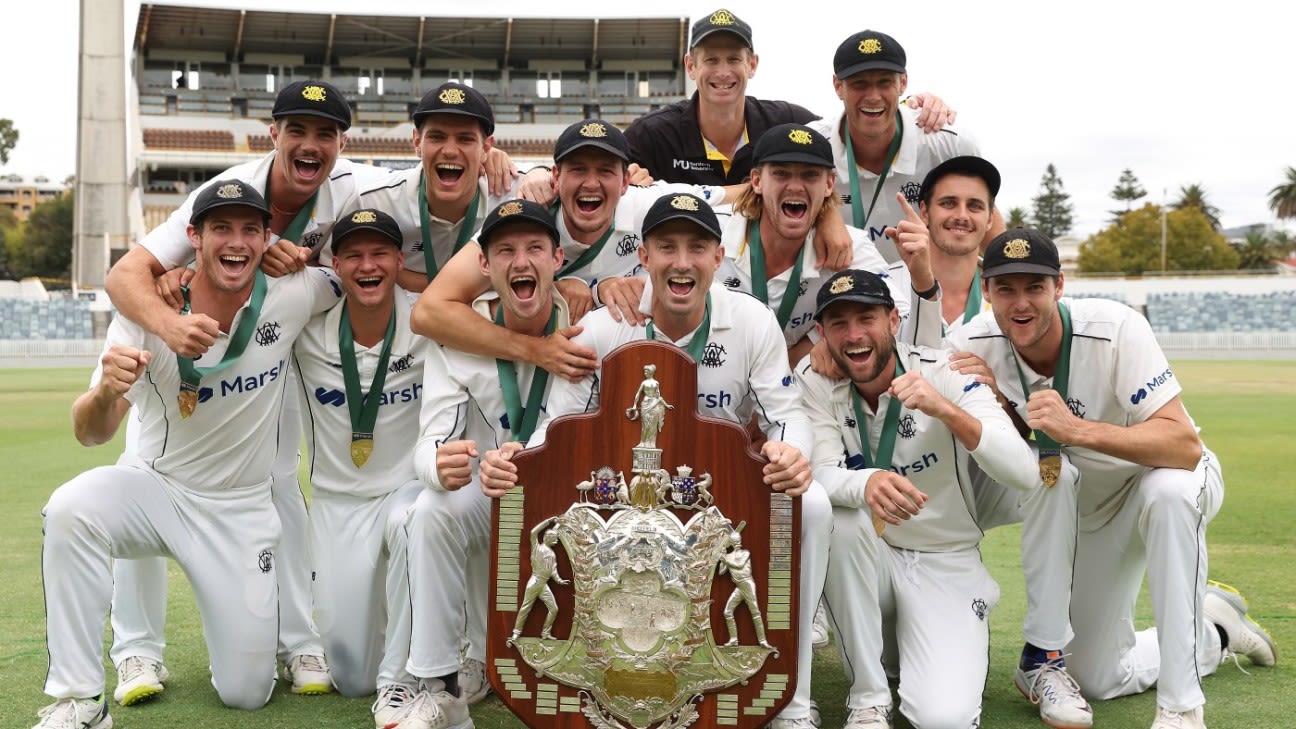 WA have retained most of their key talent in the off-season with five CA contracted players helping them manage their salary cap well. Liam Guthrie has headed to Queensland but he did not play a single Shield game last year as WA’s attack stayed relatively injury-free. Teague Wyllie has been elevated to a full contract as has Sam Fanning who has spent years on the rookie list. Both young batters are likely to get opportunities throughout the season.
Last season

WA broke a 23-year Sheffield Shield drought with an emotional title for stand-in captain Shaun Marsh. A thumping victory by an innings and 51 runs against Victoria in the final round of the season was enough to secure a home final for the first time in 24 years. Then a first-innings century from Cameron Bancroft, a disciplined bowling performance, and second-innings epics from Sam Whiteman and Aaron Hardie was enough to secure a draw and the title on first-innings bonus points.

WA’s depth across the season shone through as they used 18 players in their Shield side across eight matches. They also didn’t have a single player manage to play in all three Shield, Marsh Cup and BBL titles with WA and Perth Scorchers, further underscoring the depth of talent.

On a batting front, Whiteman had an outstanding season at the top of the order (641 runs at 58.27) concluding with his Player of the Match performance in the final. Hilton Cartwright made a return to form with two hundreds, while Cameron Bancroft fought off a difficult start to the season to produce one of his finest innings in the final.

With the ball, Joel Paris (24 wickets) and Lance Morris (20 wickets) formed the backbone of a well-rounded four-man pace attack. Jhye Richardson and Hardie made a huge impact in the few games they played. WA also unearthed 17-year-old batter Wyllie who played in the final and looks a future Test player.

Player to watch
Aaron Hardie has emerged as a player of significant interest to Australia’s selectors after a stunning Shield final and a brilliant tour of Sri Lanka with Australia A. He emerged from nowhere having been on the fringes of WA’s side following elbow surgery ahead of last season. When fully fit he can offer swing and bounce with the new ball and is capable of batting in the top seven with a belief he could move into WA’s top five in the future. His next challenge is creeping up the order while improving his wicket-taking ability on lower, slower pitches. But he could push for Australia A selection on next year’s tour of England.
Australia radar
Cameron Green might not play a single game for WA this year with his emergence as a T20 phenomenon at the top of the order for Australia making him an all-format juggernaut. WA will also have to manage the comings and goings of Mitch Marsh, Ashton Agar, Josh Inglis and Marcus Stoinis from various international squads across the summer. Jhye Richardson is still on Australia’s radar although his fitness remains a question mark.
Josh Philippe continues to develop as a three-format player and played well in the four-day games in Sri Lanka. His fast feet against spin will do him no harm when Australia looks at its batting depth options for the Test tour of India next year. But he is more likely to be looked at in the shorter formats as Australia regenerates their T20I side post the World Cup and looks for opening options to replace Aaron Finch in the ODI team ahead of next year’s 50-over World Cup.