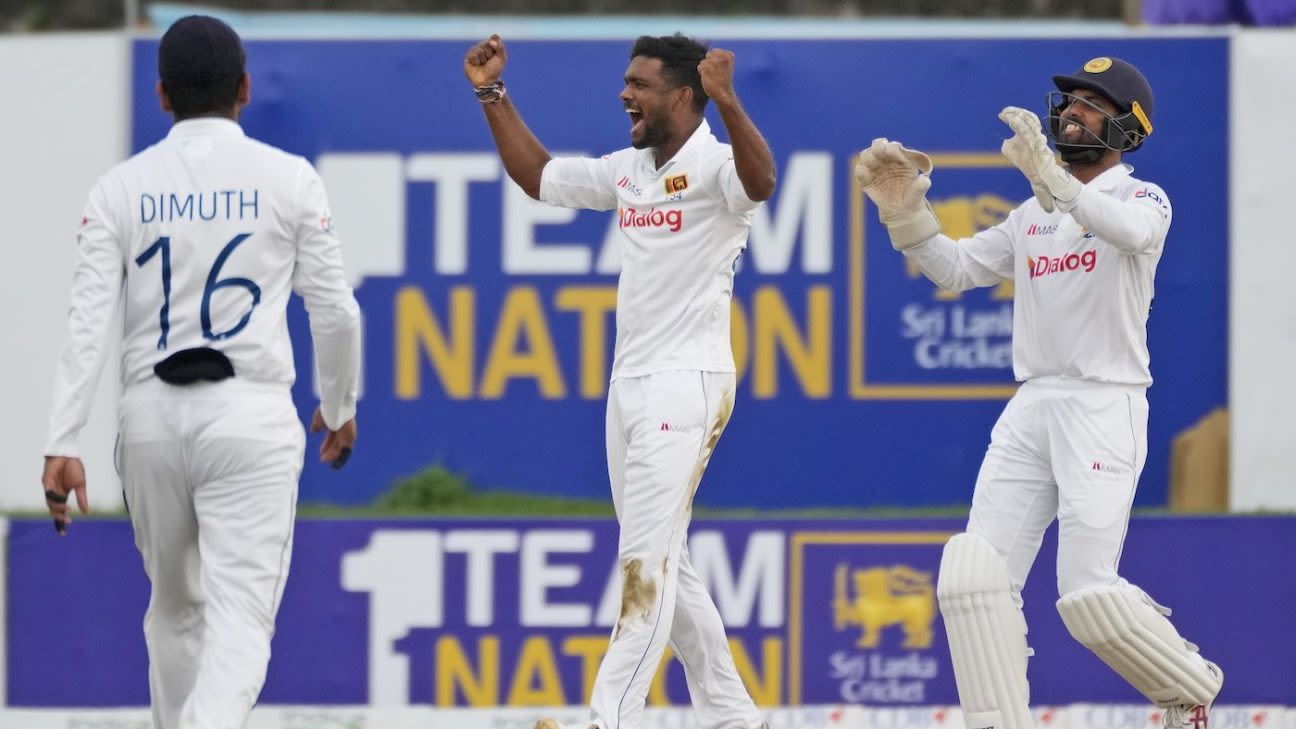 Ramesh and Embuldeniya star to leave West Indies at 52 for 6 after Karunaratne, Mathews fifties put SL in command

Eleven wickets – seven of them belonging to the visitors – fell on the fourth day of the Galle Test between Sri Lanka and the West Indies as the hosts inched closer towards victory. Sri Lanka’s spinners Ramesh Mendis and Lasith Embuldeniya ran through the West Indies batting line-up to leave them reeling at 52 for 6 at stumps. They need a further 296 runs to win with just four wickets in hand.

Much like in the first innings, it was the loopy offspin of Mendis that did much of the damage, as he accounted for four more West Indies wickets to take his match tally to seven. Embuldeniya grabbed two meanwhile. Sri Lanka’s spinners have so far been responsible for 15 of the 16 in this match.

Chief among the visitors’ problems has been their inability to pick the straighter one that goes on with the arm. Sri Lanka spin coach Piyal Wijetunge had spoken of the lack of control shown by his spinners after the end of play on the third day; he would have been much happier with their showing the following day.

Each of Shai Hope, Roston Chase, Kyle Mayers and Jason Holder was done in with the Sri Lanka spinners’ straighter variant, with Mendis accounting for three of them. Aside from Mayers, who left one from Mendis that darted in to trap him plumb in front of the middle stump, the other three were all castled one way or the other.

The speed and nature of the collapse – they were 18 for 6 in 13 overs – was in sharp contrast to the ease with which Sri Lanka’s batters played West Indies’ spinners earlier.

Karunaratne once more top-scored for Sri Lanka with a 104-ball 83, in what was his sixth straight 50-plus score in Tests – he has crossed 50 seven times this year in seven Tests, and gone on to reach three figures five times, including a career-best 244 against Bangladesh in Pallekele in April. He, however, fell short of making back-to-back centuries in this Test, edging a cut off Rahkeem Cornwall that looped to first slip via the keeper’s gloves. Dhananjaya de Silva was the only other wicket to fall after lunch, when he offered a return catch to Jomel Warrican.

Warrican and Cornwall ended the innings with two wickets apiece, and West Indies now need to complete a record chase – the highest total successfully chased in Galle was the 268 Sri Lanka ran down against New Zealand in 2019 – or bat out a day, though rain is expected.

Sri Lanka’s declaration followed a slog sweep for six by Mathews, who remained unbeaten on 69 off 84 deliveries.

Karunaratne, in particular, looked in good nick, growing in confidence after a circumspect start against some tight bowling from the spinners. Mathews, at the other end, also looked comfortable, a late cut past the backward point the highlight of his innings.

West Indies might have had more wickets had it not been for some uncertain decision making. After an ill-advised early review against Karunaratne – he was rapped on the pads outside off stump not offering a stroke, but replays confirmed the ball was missing the stumps by a considerable margin – West Indies became extremely hesitant to use DRS.

This hurt them on two occasions. The first was a missed Oshada sweep that brought about a fervent appeal from wicketkeeper Joshua Da Silva. The review remained unused, only for replays to show that Oshada may have got the faintest of touches.

While that didn’t prove too costly, the next one very well might. Cornwall hit Karunaratne on the pads, but none of the West Indies players seemed confident enough to challenge the umpire’s assertion that the ball had pitched outside leg. No review again, only for replays to show that the ball had indeed pitched in line and likely would have hit off stump.

Had those dismissals – the Karunaratne one, in particular – gone in favour of the visitors, things might have been different. But as it stands, only rain or an unlikely rearguard stand in the way of a Sri Lanka win.

Earlier in the morning, it took just over 15 minutes for Sri Lanka to claim the final West Indies wicket and secure a healthy first-innings lead. Following a rain-delayed start, Sri Lanka picked up the second new ball first thing and went on the offensive against Da Silva and Gabriel with the spin duo of Lasith Embuldeniya and Praveen Jayawickrama.

Of the two, Jayawickrama looked the more likely to pick up the last wicket, having beaten the outside edge of both batters numerous times, and he was rewarded in the end. Gabriel was trapped lbw after being caught flush on the toe by one that was well tossed up. Jayawickrama finished with the best figures of the innings: 4 for 40.