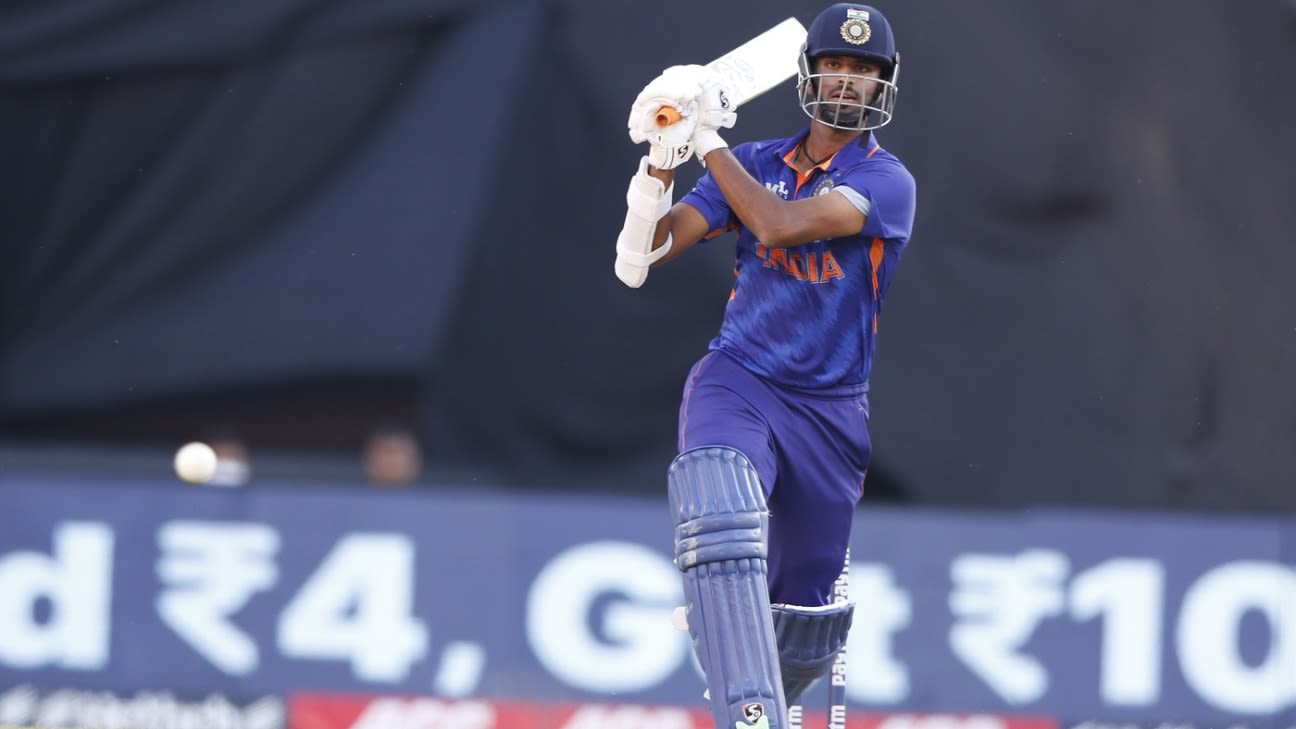 India allrounder Washington Sundar will turn out for Lancashire in county cricket this season, subject to fitness and visa clearance, ESPNcricinfo has learnt.
Washington, 22, could be available for up to three County Championship games, from July, and the entire 50-overs Royal London Cup. He could become the second Indian to feature in English county cricket this season after Cheteshwar Pujara, who racked up 720 runs in eight innings at a stunning average of 120 for Sussex in division two. Shreyas Iyer had signed up as Lancashire’s overseas player for the Royal London Cup in 2021 but had to eventually pull out because of a shoulder injury.

“I am extremely excited to play county cricket for the first time with Lancashire Cricket,” Washington Sundar said in a media statement from the county. “To play in English conditions will be a great experience for me and I can’t wait to play at Emirates Old Trafford.

“I would like to thank both Lancashire Cricket and the BCCI for allowing this opportunity [to] happen and I’m looking forward to joining up with the squad next month.”

Mark Chilton, Lancashire’s director of cricket performance, welcomed Washington into the set-up. “Washington is a multi-format all-rounder whose skills with both bat and ball will be a great addition for us in the Royal London Cup and County Championship this summer,” he said. “His international and IPL experiences will be invaluable in the development of our younger cricketers, many of whom he will be playing with during his stay. The addition of Washington is one that will excite our members and supporters, along with helping our continued push to bring silverware back to Emirates Old Trafford.”
Lancashire are currently third on the County Championship division one points table, behind Surrey and Hampshire, with 108 points. They will resume red-ball cricket with a clash against Gloucestershire from June 26 after their Vitality Blast T20 games.
Washington is currently working his way back from a hand injury at the National Cricket Academy (NCA) in Bengaluru. The red-ball games in England will be Washington’s first since he sustained a finger injury while playing a three-day tour game against a County Select XI in Chester-le-Street in July 2021. The injury had sidelined him from that England tour and the second leg of IPL 2021.

Washington has suffered multiple setbacks because of injury and illness since last year. He was lined up to return to action for his state side Tamil Nadu in the 20-overs Syed Mushtaq Ali Trophy, but it is understood that the Indian team management had then warned Tamil Nadu against rushing him back into action.

He then made a successful return in the 50-overs Vijay Hazare Trophy, taking 16 wickets in eight games at an economy rate of 4.77 in Tamil Nadu’s run to the final. It paved the way for his India white-ball return, for a three-match ODI series in South Africa, but he had to miss that after testing positive for Covid-19.
Washington marked his comeback with all-round contributions at home in the ODI series against West Indies, but that was short-lived, too, as he sustained a hamstring injury ahead of the T20Is.
More recently in IPL 2022, he hurt his webbing twice and played just nine games for Sunrisers Hyderabad, scoring 101 runs and claiming six wickets. The franchise’s head coach Tom Moody pointed out that the injuries to Washington and T Natarajan shook up the balance of the XI.

Washington’s Lancashire gig will clash with the Tamil Nadu Premier League (TNPL), which kicks off on June 23 in Tirunelveli. Washington is with Salem Spartans in the TNPL, but it is understood that he did not take part in the side’s preparatory camp in Chennai.

The red-ball games for Lancashire could be Washington’s opportunity to prove his form and fitness. While speaking on ESPNcricinfo’s analysis show T20 Time:Out during the IPL, Ravi Shastri, the former India coach, talked up Washington as a future all-format allrounder for India.

“He is going to be one of India’s leading allrounders,” Shastri had said. “He is the future. You have [Ravindra] Jadeja today. Three years down the line, if Jadeja is still fit, he will play. There is Axar [Patel] around. But this guy is your premier allrounder across all three formats of the game. Hear what I am saying. Three formats of the game.

“This guy is a serious cricketer. He is still very young, he has got to understand his own game, how good a player he is. Shot selection will come, especially for the white-ball format. [If he] works on his fitness so that he is not injury-prone, India have got a serious cricketer in him. Across all formats of the game. I think it is up to him really to do the hard yards on fitness. No excuse. He can’t depend on X, Y, Z. He has to look at himself in the mirror and say I want to work hard and I want to be the leading allrounder in Indian cricket over the next three years. And he can do it. Easy.”