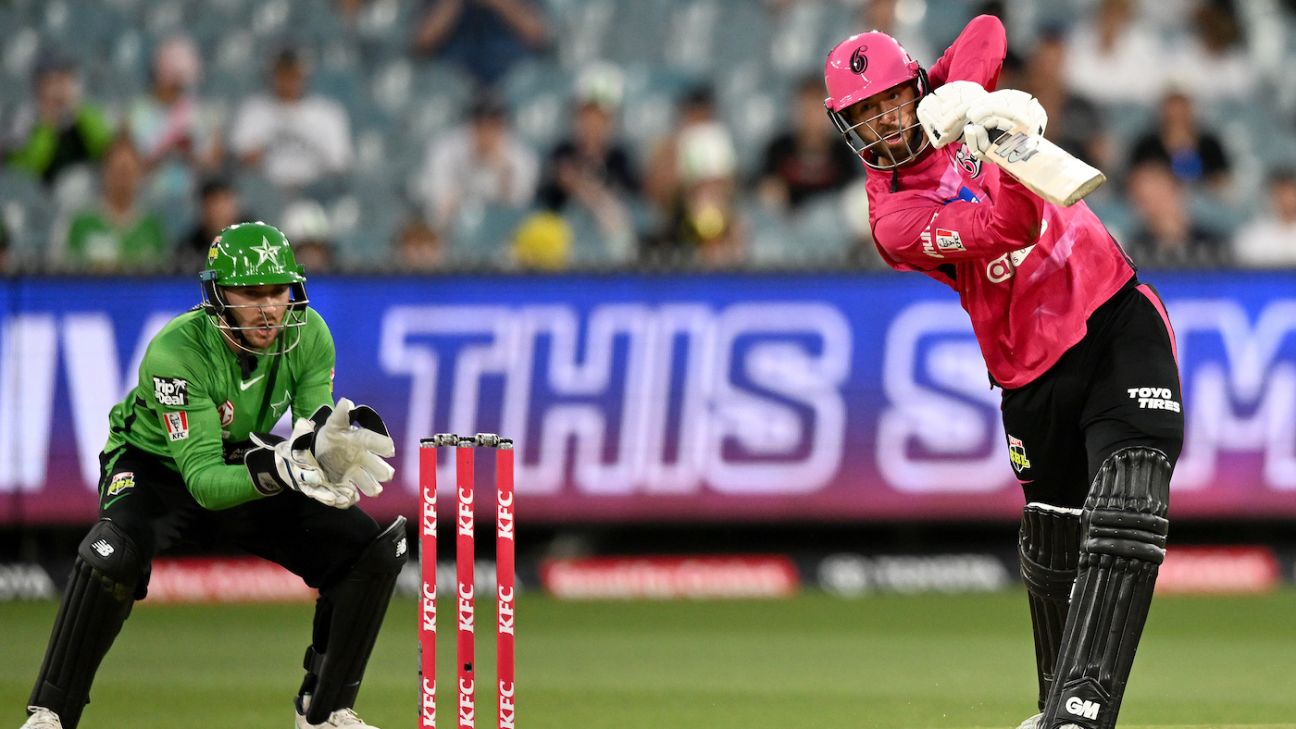 English import James Vince fell short of a century but delivered at the top of the order to steer the Sydney Sixers to a six-wicket win over Melbourne Stars.
Marcus Stoinis blasted 52 off 28 balls to lift the Stars to a competitive 5 for 173 at the MCG on Friday. But Sixers reached their target with just one ball to spare on the back of Vince’s unbeaten 91 from 59 deliveries and some late hitting from Jordan Silk.

Silk belted a six from the third ball of Luke Wood’s dramatic final over and was controversially given out caught behind before Dan Christian hit the winning runs.

The result was the Sixers’ ninth consecutive win over the Stars – a record BBL period of dominance by one club over another.

It left the Stars languishing in last place, while the Sixers are level on wins at the top with the Scorchers and Thunder.

The Sixers required 36 off the final three overs when Vince belted back-to-back sixes off Trent Boult (1 for 39).

A further 11 runs were required off the last over and Vince should have been run-out looking for two off the first ball, but fellow Englishman Joe Clarke missed his first swipe at the stumps with the batter short his ground.

The massive six from Silk (15 off 10) tilted the match the Sixers’ way but he was judged to have nicked Wood’s next ball behind and was given his marching orders. Christian hit his only ball faced off Wood for four, steering the Sixers to 4-176.

Vince’s season-high innings included nine fours and two sixes as he fell narrowly short of becoming the first player in Sixers history to score a century.

Earlier, Stoinis showcased his value as one of the BBL’s great entertainers in his first match since announcing a deal to play in the ILT20.

The Stars’ premier power hitter was travelling at run-a-ball for his first 12 deliveries faced and exploded with 38 off the next 12, bringing the home crowd to life.

Stoinis blasted seven fours and two sixes, playing the lead role as the Stars took 34 runs off Chris Jordan and Hayden Kerr during the power surge.

Stars opener Tom Rogers, signed as a replacement for injured skipper Glenn Maxwell, rode his luck at times and cashed in with a career-best knock of 48 from 33 deliveries.

But he was denied a maiden half-century at BBL level when he fell to a brilliant diving catch by Jordan in the outfield.

Sean Abbott (3-31) was the game’s only multiple wicket-taker.

The Stars lost Campbell Kellaway to a cut hand after he was hurt taking a catch to dismiss Daniel Hughes (28).