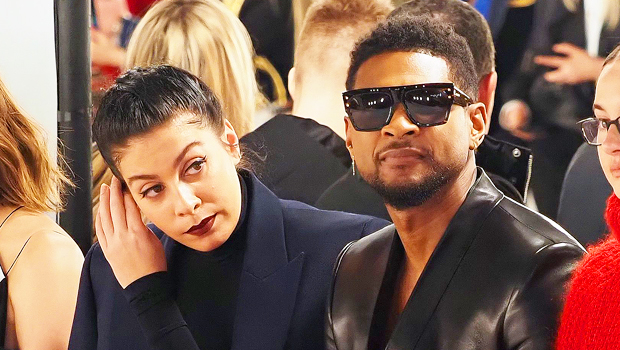 Usher proudly announced that his girlfriend Jenn Goicoechea gave birth to a baby boy. If you’re keeping count, this now makes Usher a father of four!

Usher is now a dad of 4! The 42-year-old singer welcomed another child on September 29, when his girlfriend, Jenn Goicoechea, gave birth to a son named Sire Castrello Raymond. Usher announced the thrilling news via Instagram on Tuesday, October 12, sharing a closeup shot of his newborn son along with a sweet message. “Hi my name is Sire Castrello Raymond … I am the newest addition to the Raymond crew,” Usher wrote. “I was born Sept 29 2021 at 6:42pm weighting 7lbs 13oz. Hear me roar … A.K.A Ra Ra .👶🏽 ♎️Gang.”

Usher received a flurry of congratulatory messages in the comments section of his post from famous faces like John Legend, Jurnee Smollett, Lil Jon, Snoop Dogg, and more.

Jenn announced her pregnancy with back in May when she showed off her baby bump while walking the red carpet at the iHeartRadio Music Awards with Usher. The couple also share 1-year-old daughter Sovereign Bo, while the “Yeah!” rapper has two more children, sons, Naviyd Ely, 12, and Usher V, 13, from his relationship with ex Tameka Foster.

Two months after his third child was born, Usher introduced baby Sovereign to the world during a virtual apperance on The Ellen DeGeneres Show. He shared the first photo of his newborn during the episode, and he could be seen kissing her forehead. “She came out early,” Usher said of his daughter’s delivery. “She was scheduled to be a Scorpio but decided she had a different plan. Libras, you know, they kinda have their minds made up what they wanna do.”

Now, Usher has once again expanded his family with the arrival of baby Sire. We’re sending our heartfelt congratulations to the rapper and Jenn!