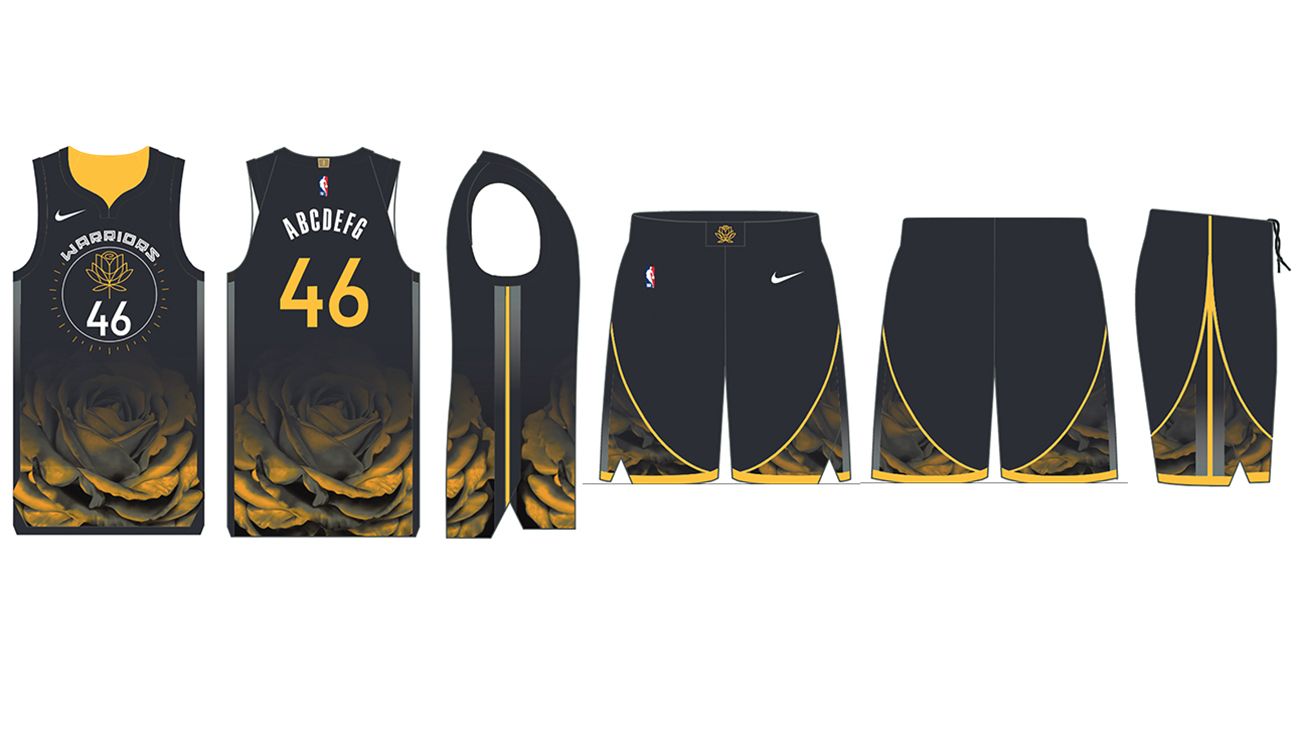 Allison Hueman, the noted Oakland-based artist and muralist, could not believe the email she was reading in January 2021: Would you be interested in designing the City Edition uniform for the Golden State Warriors?

“Wait, are they really asking me to do this?” Hueman recalls thinking. “I remember having to read it over a few times.”

Hueman is a Warriors fan. She had already collaborated with Stephen Curry on a sneaker line, infusing the Under Armour shoes with her trademark ultra-colorful spray-paint style. Jen Millet, the Warriors’ chief marketing officer, gave Hueman one directive, both recall: “Just go for it. You have full creative freedom.”

The Warriors decided the jersey should highlight and promote women’s empowerment. The team had already rebranded March from “Women’s History Month” to “Women’s Empowerment Month,” and wanted the jersey to match that theme.

“The ‘Women’s History Month’ name seemed a bit odd to us,” Millet says. “Like something out of ‘Little House on the Prairie.’ Let’s reframe it.” Team officials had found players enjoyed telling and hearing stories about the women who had helped shape them, MIllet says.

The #MeToo movement was in full swing. Kamala Harris, an Oakland native, had just been sworn in as vice president of the United States. The moment seemed right for a women’s empowerment-themed jersey — and maybe an artistically adventurous one.

The result is among the most radical jerseys in NBA history, centered around a photorealistic yellow-gold rose — one of the symbols of the women’s suffrage movement — that stretches from just under the center logo to the bottom edge of the jersey.

The larger rose is actually hand drawn, Hueman says. The smaller one in the center, outlined in yellow gold, sprung from a vision that popped into Hueman’s head as she dreamed up the jersey. “I imagined the cables on the Bay Bridge had broken apart and come back together to form this line-art rose,” she says. A smaller version of that rose appears on the belt buckle. The golden trim on the shorts echoes the soaring curves of the bridge.

The blocky font is a nod to Art Deco landmarks around the Bay Area, including signage on the Paramount Theatre in Oakland, Hueman says. Hueman intentionally melded traditionally sharp, masculine colors — mainly black — with the flower imagery.

“The color scheme is really masculine, but the content is really feminine,” she says. “I try to find opposing elements to balance each other out. I also didn’t want to make something ‘soft’ because not all women are ‘soft.'”

In conjunction with the jersey launch, the Warriors and Rakuten are donating $25,000 to the Women’s Sports Foundation, the team said.

The Warriors admired how the Los Angeles Lakers underlaid one of their 2017-18 jerseys with a black snakeskin pattern — an homage to Kobe Bryant’s “Black Mamba” nickname, Millet says. (Bryant helped design the jersey, as he told ESPN then.) The pattern was hard to spot on television, or from a distance. The Warriors wondered if they might do something similar, but with brighter and larger imagery.

“With City Edition, you can really push the envelope,” Millet says. “Maybe you fail. Maybe people hate it. It’s one year. Everyone can deal with one year.”

Hueman’s art typically mingles lots of bright colors, but she decided to go with something simpler and more in line with the team’s larger art collection.

“I thought of me as a Warriors fan, and what I would want to buy and wear,” she says. “And I love wearing black.” She knows the design is different, new. She is awaiting fan response today.

“I’m scared, to be honest,” Hueman says. “I know how Warriors fans and sports fans are — their teams are precious. And so I’m touching something that’s sacred. There is part of me that’s like, ‘F—, yeah, I’m so excited.’ And there is another part that is nervous to see the reaction.”

Even the team is eager to see how the jerseys look in game play, since tucking them in — which is mandatory, ask Chris Paul — will shove some of the larger flower out of sight.

“Our point was that if you were going to wear it as part of your regular lifestyle, you’re not going to tuck it in,” Millet says. (The team explored lifting the flower higher on the jersey top, but ran into issues and regulations about fitting all the other required information, Millet says.)

Early in the process, Millet and her top deputy asked officials on the basketball operations side if they could run the general concept — a women’s empowerment-themed jersey — past the most important voice in the organization: Stephen Curry.

“We were gut-checking this,” Millet says. “How are people going to feel about this? Are we too in our own heads about it? Is it relatable? Will the players embrace it?”

Millet and her team got on a video call with Curry. “He didn’t even blink,” Millet recalls. “It was immediately, ‘Yeah, I like it. It’s great.'”

Hueman got to work. She liked the idea of playing off the Great Seal of the State of California, an early symbol of statehood featuring an armored Minerva — the Roman goddess of wisdom.

“She’s literally the first golden state warrior, if you think of it that way,” Hueman says.

Other mockups featured shapes that intersected to form the Venus sign, and a color palette based on the famous Rosie the Riveter images from U.S. recruitment campaigns during World War II, Hueman says.

Get access to exclusive original series, premium articles from our NBA insiders, the full 30 for 30 library and more. Sign up now to unlock everything ESPN+ has to offer.

MIllet and her team eventually pitched three to Curry. “When you are showing creative work to players, you always worry that they think you made it — that they are not going to be real with you — like are your feelings going to be hurt?” Millet says. “We leveled with [Curry]: ‘You have to tell us.’ And he was honest.”

Curry was lukewarm on the state-seal-based design, Millet says. The organization may revisit it down the road, though there was some concern the shield itself was both too busy visually and too literal, Millet says.

Then they showed Curry the photorealistic flower design. “‘That’s fire,'” Curry told them, according to Millet. (Curry confirmed these accounts through a team spokesman.)

“Now we had to go back to the business side to sell it,” Millet says. “And they were like, ‘I don’t know.’ But that was part of the reason we went to Stephen first. It brings credibility. You can walk in and say, ‘This is the design. We understand it’s aggressive. But we’ve already shared it with Stephen and he’s into it.'”

Like almost every organization, the Warriors have uniform traditionalists, Millet says. “They say, ‘Why can’t we just have two uniforms?’ And I get it.” The players turning NBA arena hallways into pregame fashion runways has in some ways helped creative staff persuade the old-school sorts on more daring and even gaudy designs.

“This is what players wear when they walk in for games,” Millet says. “Let’s meet them where they are.”

Just in case, one draft design relegated the flower pattern down the sides of the jerseys — and had the black fade into a gray meant to evoke the San Francisco fog:

The line-art rose in that version also had roots.

But that draft looks like a standard NBA jersey. It’s nice, but there’s nothing shocking or unexpected about it — nothing that shouts: Whoa, this is an event. Even the detractors of this jersey — and there will be some, there always are — will concede its uniqueness.

Hueman has major pieces all over the country, but she doesn’t recall ever feeling quite like this leading into an unveiling, she says.

“This is arguably the biggest thing I’ve ever done,” Hueman says. “I have butterflies every time I think about it.”