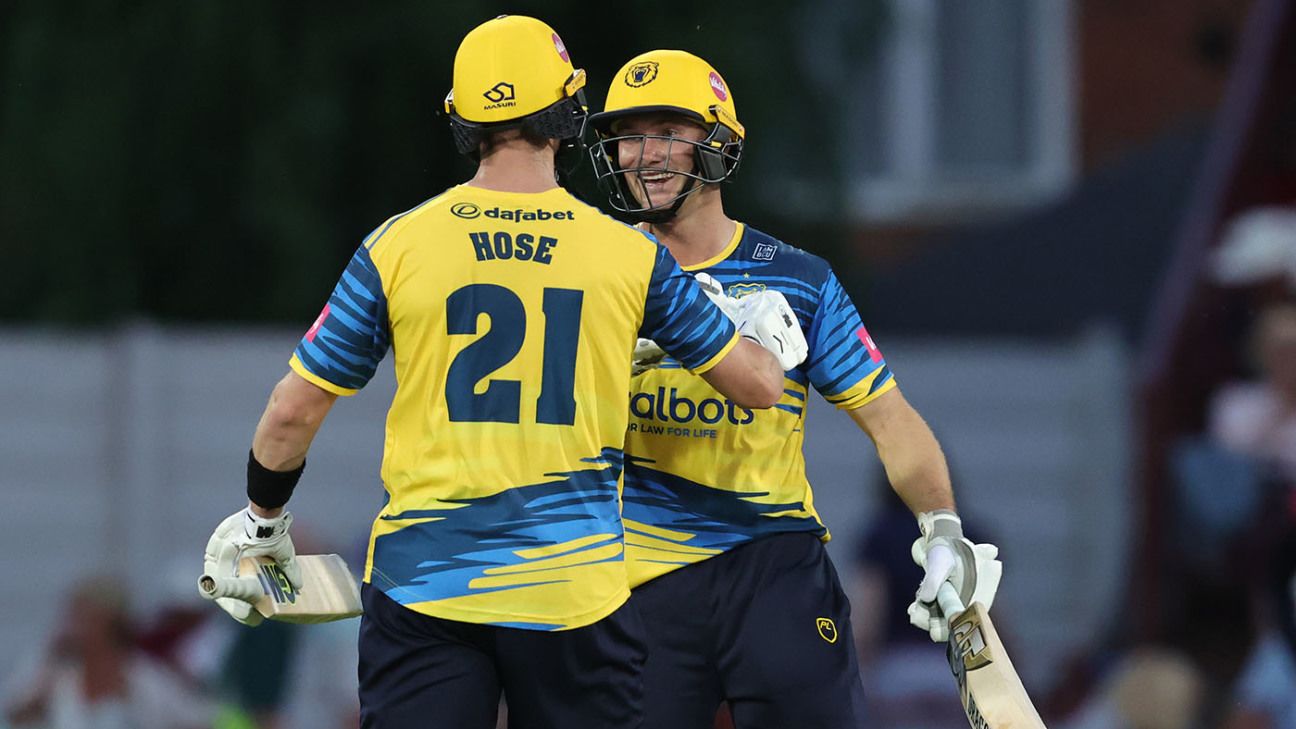 The time of reckoning is upon us in the Blast and Birmingham responded to it by swinging to the leg-side harder and more often. They remained in touch with Northants’ 211 for 6 from the outset, and even though they needed 77 from the last six overs, they broke the target with a merciless assault on the Northants’ left-arm wrist spinner, Freddie Heldreich as they pulled off the highest T20 chase in their history.

Adam Hose is as uncomplicated a T20 batter as you can get, an unabashed seeker of deep midwicket. Put the ball in his arc and his long limbs will deposit the ball skywards. Chris Benjamin often looked scratchy, but give him half an opportunity and he can target the same region in destructive fashion. Both made unbeaten half-centuries, their shot selection excellent as their stand of 100 rattled along in 54 balls.
Carlos Brathwaite, Birmingham’s captain, exudes relaxation and confidence, good attributes at this stage of the season. “We’ve been reckless at times this season,” he said. “We wanted to be positive, express ourselves, but bat a lot smarter.”

Birmingham go second in North group with this victory whereas Northants now slip to fourth and will sense Yorkshire, in particular, scenting an opportunity to overhaul them.

Heldreich, who went for 59 from four overs, must have felt himself deliberately targeted. Alex Davies’ whirlwind 42 from 18 balls set the tone. Successive sixes over long-on appeared to have put the bowler in his place, but Heldreich is a confident sort and, with his next ball, he drew Davies into a wild sweep and bowled him off a bottom edge.

But it was not the bowler’s night. Chris Benjamin looked out of touch until he launched him over the leg-side for 6-4-6 in successive balls. Converging boundary fielders were beaten by inches and Heldreich winced, not the first bowler to wonder why the boards could not be pushed back to fairer proportions. With 59 needed from six, Birmingham’s head coach Mark Robinson, a bit of a poker face these days, flashed a smile for the first time on the night. By the end Jake Lintott, sat next to him in the dugout, had him roaring with laughter: when Birmingham are batting, the dugout is where Robinson wants Lintott, for more reason than one.

Birmingham had lost three wickets for 64 by the end of the powerplay. Paul Stirling took Northants for a career-best 119 in a memorable Birmingham debut, including five consecutive sixes off James Sales, but he has been short of runs since. He biffed 17 from Tom Taylor’s first over, but that was that.

The reason for that was Ben Sanderson, an old-fashioned seamer but highly effective as he nibbled the new ball both ways off the seam, having Stirling caught at the wicket off an inside edge and silencing Rob Yates with a bail-trimmer. Sam Hain, the lynchpin of the Bears’ line-up, is having to contend with a back strain, and there was general delight when Taylor returned to the attack and immediately had him lbw to a yorker.

Northants’ batting remains heavily reliant, perhaps overly reliant, upon the Australian Chris Lynn, whose 59 from 43 balls moves him alongside Somerset’s Rilee Rossouw at the top of the Blast run-scorers with 443 runs apiece. Rossouw has a faster scoring rate (191 to 161) and has struck the most sixes, but over the tournament there have been no more violent batters in the country.

There were times when Lynn felt comparatively reserved, as if aware of the responsibilities that rest upon him. Initial assessment was necessary because Olly Stone, on the ground where his career began, was unsettlingly fast and bouncy with the new ball. Stone is recovering cautiously from his fourth stress fracture in five years, but caution is thrown to the winds whenever he gets the ball in his hands.

Somehow, Northants still emerged from the powerplay with 53 to their name. Ben Curran had also been troubled by Stone’s pace and bounce on an excellent, fresh pitch, surviving one bat-handle crusher with a cry of “where did that come from?” as he made it to the safety of the non-striker’s end. He fell after an opening stand of 72, bowled by Brathwaite as his defensive block spun back onto his stumps.

Lintott’s avuncular left-arm wrist spin did for Lynn, who carved a ball angled across him to short third, but Saif Zaib quickened the impetus, his 74 taking only 32 balls, when he swung Lintott to long off. He was confident, steely-eyed and full of purpose. A definite, long-term breakthrough has been a long time coming, and he has had a thin time in the Championship this season, but he has more talent, if not better outcomes, than some batters holding Hundred deals. A career-best 92 from 58 against Derbyshire in Northants’ defeat the previous night, and now this: this time, at 24, he needs to make it pay.

Birmingham gave both Lynn and Zaib lives in the field. Zaib was only 12 when he cut Craig Miles to deep point, but Yates, sliding in, failed to retrieve a half-volley chance. Benjamin’s miss at deep midwicket, off Brathwaite, when Lynn was 52, probably owed much to a low evening sun and he was fortunate not to take a blow in the face. The County Ground is hardly the most vociferous crowd in the country, but the most raucous spectators sit in this area, preying upon fielders like Great White Sharks exploiting the angle of the sun to hunt down their prey. Long before the end, Birmingham were firing sixes in their direction