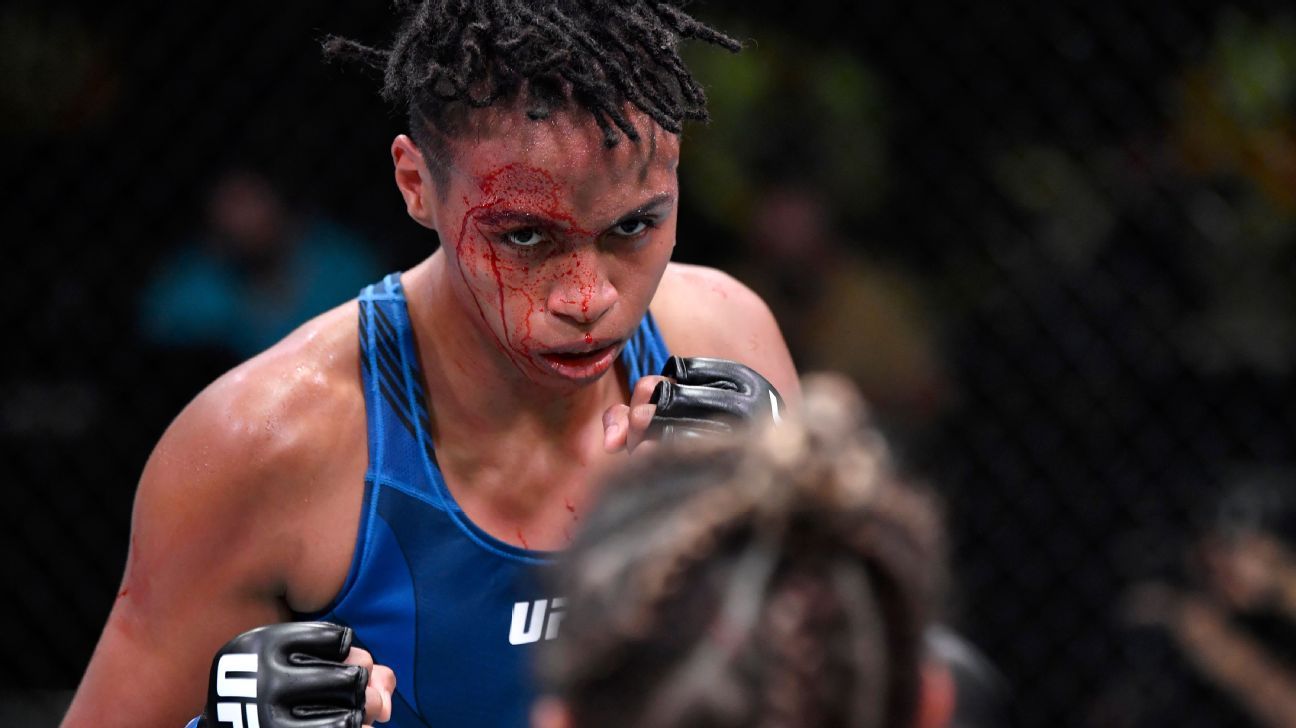 Dominick Reyes is in a peculiar spot. He will enter Saturday’s UFC Fight Night main event in Las Vegas on a two-fight losing streak, which lends a do-or-die significance to his light heavyweight bout with Jiri Prochazka.

But that’s a harsh consequence for Reyes, considering who those losses came against. The first one, in February 2020, came in a title fight against Jon Jones, arguably the greatest fighter ever, not just at 205 pounds but in MMA as a whole. The second Reyes defeat came last September in a fight with Jan Blachowicz for the then-vacant belt.

Action returns to the UFC Apex on Saturday, as top-10 light heavyweights Dominick Reyes and Jiri Prochazka square off in the main event. Reyes is coming off back-to-back title fight losses, while the emergent Prochazka carries a 12-fight win streak after defeating Volkan Oezdemir in his UFC debut.

Now he faces Prochazka, who has just one UFC fight under his belt — but what a performance it was. In July, the native of the Czech Republic knocked out former light heavyweight title challenger Volkan Oezdemir. It was Prochazka’s 11th win in a row, with all but one of them coming by knockout.

“I don’t need to prove anything, even to myself,” Reyes said. “I’ve already climbed the mountain and earned the respect of the world. All I need to do is touch the top. There’s no need to put all this extra stress on [myself.]”

The Reyes-Prochazka clash headlines an 11-fight card at UFC Apex. ESPN’s Marc Raimondi and Jeff Wagenheim analyze the results throughout the night.

This matchup of Brazilian strikers was decided by the ground game, with Botelho seizing an advantage in Round 1 but Carolina turning the tide her way in the second and third rounds to earn the nod from two of the three judges.

After each woman had controlled a round — Botelho with a takedown set up by a flurry of punches, Carolina with strong clinch work against the cage — it came down to one scramble in Round 3. Botelho went for a takedown and did get the fight to the canvas, but Carolina immediately reversed position and ended up on top. She spent the rest of the fight controlling her opponent, landing punches and trying to set up a submission.

All three judges scored the bout 29-28, two of them going for Carolina, who had missed the flyweight limit by 2½ pounds on Friday.

Carolina, who is 27 years old, got back on track after seeing a six-fight winning streak end in her last fight.

Botelho, a 32-year-old former strawweight, has lost three of her last four fights.

It might not have been the kind of showcase that some hoped, but Lookboonmee got the job done.

This fight could have been viewed as an opportunity for Lookboonmee, a prospect, to get a spectacular win and move her way up the strawweight ladder. But Hughes was game and used her strength and physicality well. Lookboonmee was active enough — doing damage in those grueling positions — to get the edge in what was a close bout in every round.

Lookboonmee, 25, has won two straight following her first UFC loss to Angela Hill in February 2020. The Thai product was coming off the biggest win of her career, over former Invicta FC champion Jinh Yu Frey last October. Hughes, a 28-year-old fighting out of Washington, has dropped both of her UFC fights so far.

Michailidis, a 32-year-old from Greece, fired those big shots only sporadically, and he missed a lot of the most violent attacks, but he did enough to cruise to his first UFC victory. He had seen a three-fight winning streak come to an end in his Octagon debut against Modestas Bukauskas in July.

All three judges scored the bout for Michailidis, two of them by 30-27 scores and the other by 29-28.

For Bhullar, who is 29 and from Edmonton, Alberta, his most damaging blows were the two illegal groin shots that stopped the action and drew warnings but no point deductions from referee Mark Smith. Bhullar has lost both of his UFC bouts after beginning his career 8-0.

“I tried to get the finish, but he was so tough, so tough,” Michailidis said.

It seemed like Colares would not survive the opening minutes. But sometimes in MMA, things are not always what they seem.

Colares stormed back after getting pummeled early by Sanders to pick up a comeback, unanimous decision (29-28, 29-28, 29-28) win to open UFC Fight Night: Reyes vs. Prochazka.

Sanders dropped Colares in the first round, landed elbows on the ground and then big combinations when the fight went back to the feet. But by the second round, Sanders might have punched himself out and Colares was just getting a second wind. He picked Sanders up and ran across the Octagon with him in a Matt Hughes-esque slam.

From there, Colares took the back and rained down punches. Sanders managed to survive the second, but Colares took him down with a trip in the third and took his back again. Colares was emotional afterward, saying he found out during his training camp that his mother has cancer.

“It was an amazing moment for me,” Colares said in his postfight interview.

Colares, 27, has gone 2-2 in the UFC since his debut in 2019. The Brazil native is the former Jungle Fight featherweight champion. Sanders, 35, has dropped two straight and five of his last seven.

Heinrich Klaasen, handed the reins of a makeshift side again, hopes...

Oxford and AstraZeneca say their COVID-19 vaccine works too