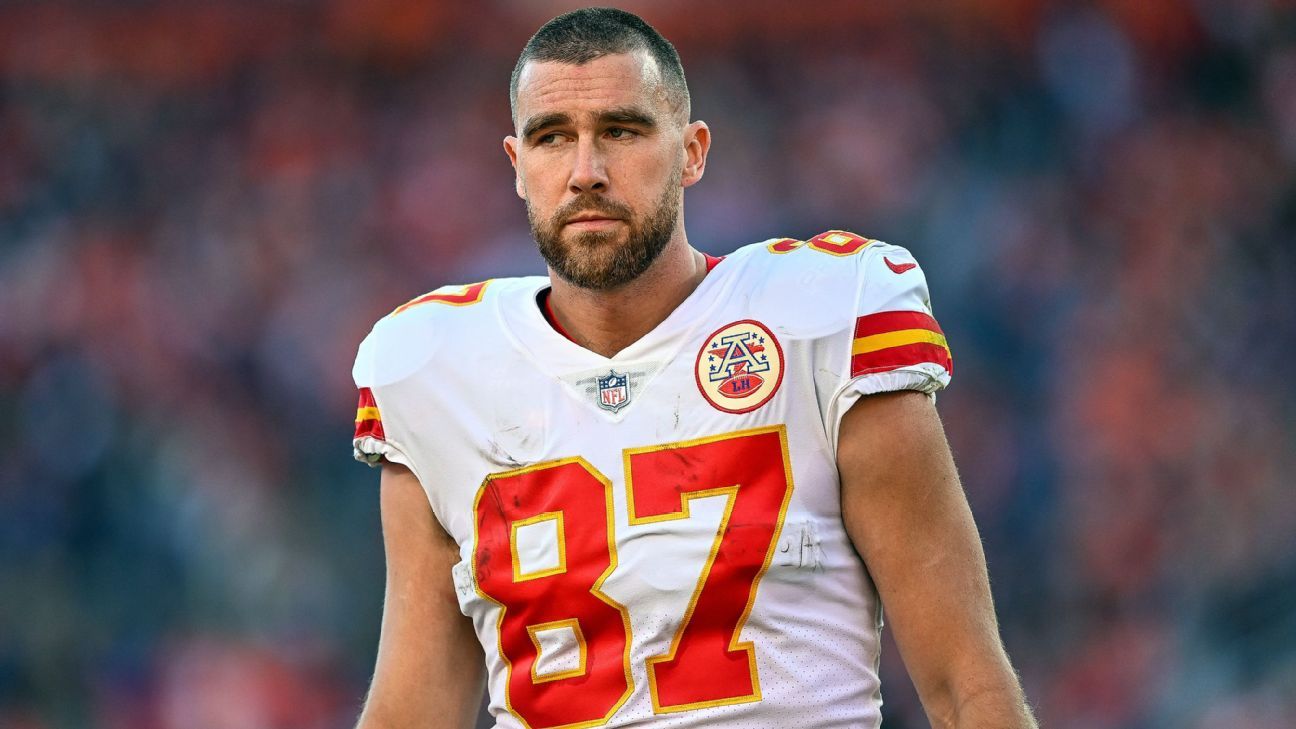 KANSAS CITY, Mo. — Andy Reid walked through Lincoln Financial Field in Philadelphia the day before a 2012 Week 10 matchup with the Dallas Cowboys. This time, though, the then-Eagles head coach was a spectator. Reid’s youngest son, Spencer, and the Temple University Owls were hosting the University of Cincinnati Bearcats.

Spencer was a redshirt freshman running back and ultimately didn’t see the field. But Reid still remembers that second Saturday in November. The Bearcats had a tight end who caught his eye, the kid brother of his center, Jason Kelce.

The redshirt senior wasn’t spectacular for Cincinnati, catching four passes for 37 yards against Temple. But he was 260 pounds and could run.

Reid decided that day that he wanted Travis Kelce as his tight end.

“I thought watching him at Cincinnati that this kid had a chance to be something special,” Reid said. “I remember he was a bigger guy but so smooth. He had that swagger. I remember thinking, ‘This guy would be great in the offense that we run.'”

The Eagles fired Reid after the 2012 season, his 4-12 record the worst of his head-coaching career. The following season he arrived in Kansas City, where he has been Kelce’s head coach for every snap of his professional career.

Ten seasons later, Kelce has 10,344 receiving yards, the fourth most for a tight end in NFL history, cementing his place as one of the greats at his position.

And at 33 years old, Kelce continues to improve. He’s having one of the best seasons of his career, catching a personal-best 110 passes and 12 touchdowns. He added to his legacy in the Chiefs’ divisional round playoff win over the Jacksonville Jaguars last weekend, when the Chiefs needed him the most.

With quarterback Patrick Mahomes hobbled because of a high ankle sprain, and the Chiefs having to go with backup quarterback Chad Henne for a series, Kelce caught 14 passes, one fewer than the NFL postseason record, and scored two touchdowns in the Chiefs’ 27-20 win, a result that sent them on to Sunday’s AFC Championship Game against the Cincinnati Bengals (6:30 p.m. ET, CBS).

“He’s just continued to evolve and be even better as a tight end. He is getting up there [in age]. I’m going to try to keep him here as long as possible, I promise you. He’s not taking any screens like 80 [yards] anymore, I don’t think. But he’s still going to make some production on the field.”

IT TOOK REID little time after joining the Chiefs to determine they had a deficiency at tight end. They’d had one ever since trading Tony Gonzalez in 2009.

In his first draft as coach, Reid and the Chiefs drafted Kelce in the third round.

He didn’t play as a rookie after having microfracture surgery on his knee, but Kelce returned the next season, and Reid’s thoughts on him were quickly confirmed.

In the 2014 preseason, Kelce took a short pass and outran four Bengals defensive backs for a 69-yard touchdown.

“At that point, I said, ‘Well, this kid’s got something to him,'” Chiefs tight ends coach Tom Melvin said.

Kelce’s career quickly took off. He caught 67 and 72 passes his first two seasons and hasn’t been below 80 receptions or 1,000 yards since.

Most Rec. Yards by TE

He might have done better in those early seasons had he not let his emotions get in the way. Kelce received a number of unsportsmanlike conduct penalties, was fined by the NFL six times and was even ejected from a 2016 game against the Jaguars for throwing a towel at an official.

“We kind of had to reel him in a little bit,” said Jacksonville coach Doug Pederson, who was the Chiefs’ offensive coordinator when Kelce arrived. “He’s excitable. Once you got him focused on his craft — the way he runs routes, the way he can wiggle and slither and get open and the toughness that he plays with — those were all things that we saw or I saw at an early stage of his career that led you to believe he could have a great career in this league.”

Since 2017, Kelce has been fined by the NFL just once, for dunking the ball over the goalpost in a 2020 game against the New York Jets.

“He can definitely still get a little bit crazy at times, but that’s probably getting older I feel like,” said Jason Kelce, whose Eagles advanced to the NFC Championship Game on Saturday. “Testosterone starts to go down and you stop losing your s— as much as you used to. But he’s doing good. I think he’s matured a lot, especially since college.”

Now, Kelce is one of the veteran leaders in Kansas City. That was on display in Saturday’s win as he helped a backup quarterback deliver a touchdown pass. He also has become a mentor to young players.

“Having Travis Kelce in the room is huge. I’ve always said that I’ve been grateful for that,” Chiefs tight end Noah Gray said. “There’s a lot that you can learn from him, whether it’s route running, even in the run-blocking game or pass-blocking game. There’s a lot that he’s been able to teach me. He does a great job of watching everyone’s reps, so that’s been really helpful to have an older guy like that be really tuned in to stuff like that.”

Gonzalez remains the all-time leader among tight ends in yards (15,127), receptions (1,325) and touchdowns (111). Kelce is the only active tight end among the top four in yards, and his longevity could help him catch Gonzalez.

Former Patriots and Bucs tight end Rob Gronkowski is the single-season touchdown holder for tight ends with 17 and jokingly said he fears Kelce breaking his mark.

“I was just on his podcast the other day and I told him, ‘Hey, man, it’s great what you’re doing for the position,'” Gronkowski said. “But I said, ‘You’re not allowed to break one record — my tight-end touchdown record.’ He can break them all, but that one’s not allowed.

“He is just so savvy in his route-running abilities. How loose he is; I would say that also contributes to why he has never missed a game. You can tell just the way that he runs — he’s super loose, super free. His body is just very spongy when he’s out there playing — just the way he runs routes and gets open is super impressive. He has had seven 1,000-yard seasons in a row — for a tight end, never been done — it’s just unbelievable.”

SINCE HIS ROOKIE season, Kelce hasn’t missed a game because of injury. He sat out the final regular-season games in 2017 and 2020 after the Chiefs had clinched a playoff seed and opted to rest Kelce and some other starters.

That doesn’t mean Kelce has always been injury-free. He at times has played through injuries that required postseason surgery, prompting Melvin, an NFL coaching veteran, to say, “He has the highest pain tolerance and is one of the toughest kids that I’ve ever coached.”

Kelce chalked up his ability to stay in the lineup to luck, saying, “There are so many variables that go into that. It’s hard to pinpoint that. I just try to go to work and make sure I’m ready for any situation.”

Others who play his position say it’s remarkable for a tight end to have such durability. According to his brother, Kelce stays ready by employing a team to keep him healthy. He has a chiropractor, chef, masseuse and trainer.

“Playing in every single game, not a lot of guys can do it,” said 49ers tight end George Kittle, who has missed 16 games in his six-year NFL career. “Being available for every single game no matter what he’s dealing with, I think that’s a testament to — you see all of his stats, you see how he plays — but it’s just a testament to his character because he’s probably grinded through some stuff. Everybody deals with certain injuries, but to play in every single football game available besides your rookie season, it’s incredible.”

The Chiefs don’t give Kelce any veteran rest days at practice. He’s on the field when they are.

Access elite coverage for every fan: highlights of the biggest games, original series from NFL legends, unprecedented analysis and more. Sign up now to unlock everything ESPN+ has to offer.

“We monitor his reps,” offensive coordinator Eric Bieniemy said. “We don’t need to see Kelce every play in practice … but when he’s in there, he’s maximizing the opportunity. He’s not taking it for granted. He’s doing all the little and necessary things that we’re harping on with some of the newer guys to make sure they understand the culture that we’ve built as far as finishing, as far as detailing, as far as understanding how we practice.

“When he does get an opportunity and he catches it, you’ll see Kelce at his age catching it and taking it the distance. It’s not by chance that Kelce is making those plays on game day. You see it every day in practice.”

Though Kelce doesn’t consider it remarkable that he hasn’t missed a game because of injury in nine seasons, he does seem impressed with what he’s accomplishing at 33. He referenced his game-winning touchdown against the Los Angeles Chargers in the final minute of Week 11, a 17-yard catch.

Kelce lined up on the right side and then crossed the formation, running away from a top coverage safety, Derwin James.

“I beat him with my legs, these 33-year-old legs,” Kelce said afterward.

The Chiefs needed a big season from Kelce as much, if not more, than ever after trading wide receiver Tyreek Hill. Kelce acknowledged some initial concern about how the offense might operate and how effective he might be, but that dissipated on the Chiefs’ first drive of the season in the opening game against the Arizona Cardinals.

Kelce scored the Chiefs’ first touchdown on a 9-yard catch and later indicated the season energized him in a way he didn’t fully expect.

“I think I get excited for a new game plan more than anything,” Kelce said. “How are we going to attack these guys? How can I visualize how I’m going to attack my opponent all week long and all the various outcomes that could come on any given play? That’s what you get fired up for.”

The touchdown in Arizona set the tone for the rest of the season. The game was the first of his six with at least 100 yards. Kelce led the Chiefs in catches in 12 of their 17 games and in receiving yards in nine. He had four touchdowns in a Week 5 game against the Raiders, and the Chiefs needed every one to take a one-point win.

This season is another reminder of why the Chiefs made Kelce one of their first draft picks after hiring Reid as coach 10 years ago.

“Every single day, it doesn’t matter if it was my first day on the job or a day like today,” Kelce said after the Arizona game. “I always feel like I have something to prove, and I always feel like I want to take my game to the next level. It’s just the mentality I’ve always had and just keep getting better to perfect my craft.”