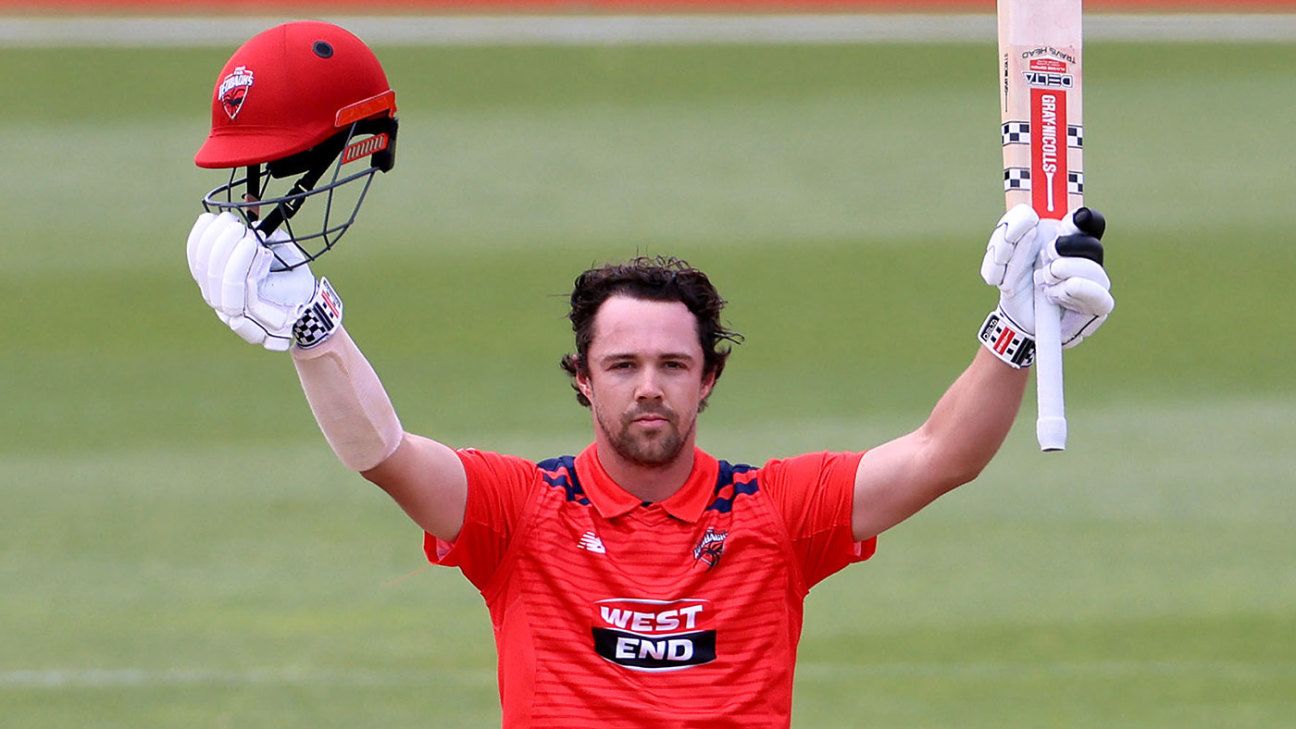 Left-hander makes fastest ever List A double-century, off 114 balls, surpassing his own record to become the 3rd player to score multiple doubles

South Australia captain Travis Head has made history becoming just the third player to score two double-centuries in List A cricket after hammering 230 against Queensland at Karen Rolton Oval in Adelaide.

Head joins India’s Rohit Sharma, who has scored three in ODI cricket, and Englishman Ali Brown, who has the highest score in List A cricket, as the only men to have managed multiple double-centuries, with Head adding to the 202 he scored against Western Australia in the Marsh Cup in 2015.

Head made 230 from 127 balls – the sixth-highest List A score – with 28 fours and 8 sixes to help set up South Australia’s total of 8 for 391 from 48 overs, with two overs lost to rain. Head’s innings was the second-highest score in Marsh Cup history behind D’Arcy Short’s 257, as well as the fastest List A double-hundred (off 114 balls). The team total was South Australia’s second-highest in competition history.

Head last played ODI cricket for Australia in 2018 when he was dropped after three single-figure scores in a series against South Africa. Since then in 21 List A innings, he has made 1136 runs at an average of 63.11 and a phenomenal strike-rate of 121.75, with three centuries and six half-centuries. His love affair with Karen Rolton Oval continues as well, averaging 95 in 11 innings there across Marsh Cup and Sheffield Shield cricket including three scores in excess of 163.

He entered with the score at 1 for 22 in the fourth over following the loss of Alex Carey. Head began his assault on the Queensland bowlers immediately and never relented. He raced to his century off just 65 balls, bringing it up with a six over square leg. His second hundred took 49 balls with the only thing to halt his progress being a short burst of rain that cost the Redbacks two overs.

Head scored all around the ground but was particularly savage on anything short, clubbing sixes over square leg and point. He was fearless with his footwork to the spinners smashing them repeatedly down the ground. He finally holed out at long on in the 47th over.

He got great support from Jake Weatherald who made 97 in their 244-run stand. Weatherald missed out on his century when he was caught off a leading edge at mid on from the bowling of Gurinder Sandhu. The right-armer took 4 for 73 on his Queensland debut having played previously for New South Wales and Tasmania.

Queensland’s target was adjusted to 397 under DLS because of the rain delay midway through South Australia’s innings.