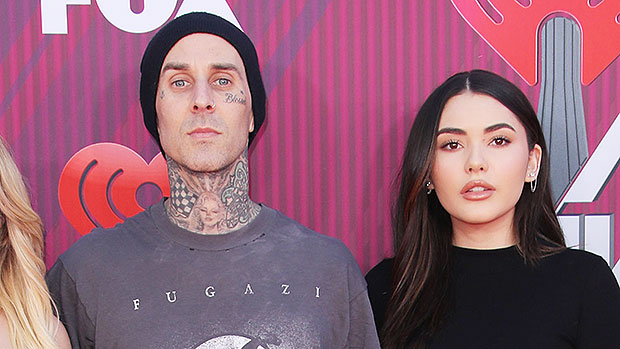 Travis Barker‘s stepdaughter Atiana De La Hoya, 23, has spoken out after an unexpected health problem sent Travis to Cedars Sinai Medical Center in Los Angeles via ambulance on Tuesday, June 28. Atiana, who became Travis’ bonus daughter when he married her mother, Shanna Moakler, 47, thanked friends via her Instagram stories on Wednesday following the release of alarming photographs, per TMZ.

“Thank you for the outpouring of love and prayers sent our way at this time,” the stunning model wrote against a simple white background. “It is heard, felt, and appreciated.” She completed the IG story slide with an, “Xx.” The comments seemed to address 16-year-old Alabama Barker‘s heartbreaking plea for “prayers” after her dad was hospitalized with pancreatitis. “Please send your prayers,” she briefly requested via her IG stories on June 28.

Atiana’s words of gratitude came after Travis, 46, was seen being wheeled into the Los Angeles area hospital on a stretcher, alongside his new wife Kourtney Kardashian, 43, which touched off a firestorm of concern among fans. Travis’ tweet on the same day reading “God save me,” escalated worries for some. Travis and Kourtney combined their families after their lavish May 22nd wedding in Portofino, Italy. Along with Atiana, whose biological father is Shanna’s ex Oscar de la Hoya, 49. He has one son, 18-year-old designer Landon Barker, and his daughter Alabama, both with Shanna.

Travis Barker: Photos Of The Rocker

The three kids from Travis’ side joined Kourtney’s kids with ex Scott Disick, 39, — Penelope, 9, Mason, 12, and Reign Disick, 7, when they married. And although the Blink 182 drummer and Shanna split in 2008, he’s remained close to his former stepdaughter. He took to social media back in April to dote on her in a sweet 23rd birthday post.

“Nobody likes you when you’re 23,” Travis captioned the post, alongside a winking emoji. The comment cheekily referenced the well-known lyrics from Blink 182’s song. ”Happy birthday, I love you so much @atianadelahoya.” The post also included a heartwarming selfie of Atiana and Travis hanging out together at the beach.