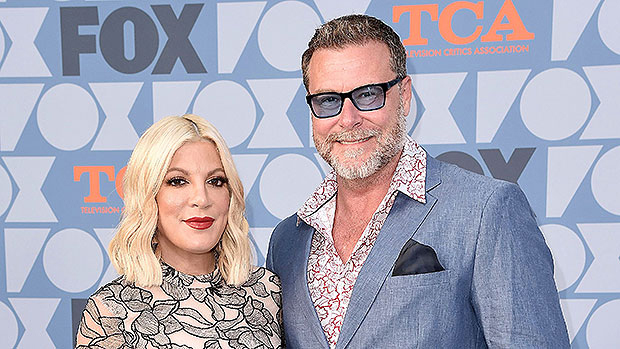 Tori Spelling and Dean McDermott were spotted on a rare outing together after months of speculation that their marriage of 16 years was on the rocks. The Beverly Hills 90210 alum and her actor husband appeared to be enjoying a leisurely stroll together in Calabasas on Thursday (September 1) after a pizza lunch date, as seen here. Both were dressed for a fun summer day: Tori in a fun peach-print dress and Dean in a tee and ripped denim shorts.

The outing comes as the rumor mill has been rife with gossip about the couple’s relationship. Since early last year, Tori and Dean — who share Liam, 15, Stella, 14, Hattie, 10, Finn, 9, and Beau, 4, — have battled accusations they were on the verge of splitting. The claims came after the couple spent New Year’s Eve apart, Dean wasn’t in the family Christmas card and Tori was spotted without her wedding ring in March of 2021. Most alarming, Tori was on SiriusXM Radio Andy’s Jeff Lewis Live in June and revealed she and Dean were sleeping in separate rooms.

However, in the midst of the rumors, a source EXCLUSIVELY told HollywoodLife that the pair — who tied the knot in May 2006 — do not “have official plans to file for divorce quite yet, but they’re also not intimate and haven’t been in quite some time.” The source also went on to say they want to “keep things as mellow as possible” for the sake of the children. “They both know they need to co-parent and right now they are. Dean is very involved with the kids and does things like takes them to school and activities almost every single day and especially when Tori is focusing heavily on her career, he’s around even more.”

A second source told HollywoodLife that the pair were “working things out” back in January. “Over the holidays they both realized that they have too much to lose by getting a divorce and that their lives together are much better than they would be apart. They were questioning whether their love was strong enough to get over their differences,” the insider explained.