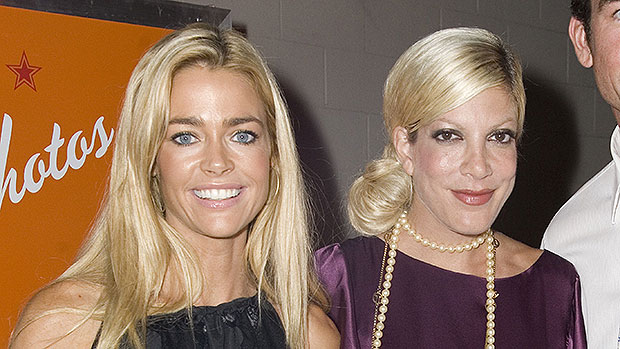 Tori Spelling, 49, admitted to subscribing to her friend Denise Richards‘ OnlyFans page and spending $400 in just two days. “I’ve been friends with her for years. I was just kind of fascinated by the whole OnlyFans and — I’m not going to lie — I was like, ‘Let me check it out. What is it entail?’” she said on Sirius XM’s Jeff Lewis Live this week, adding that she signed up with a “fake name” so the Wild Things actress wouldn’t know it was her.

“So I looked at it and of course it shows something like unless you subscribe you can’t get it. So of course I subscribed under a fake name,” she went on. After getting a taste for the content, calling it “riveting,” the Beverly Hills, 90210 alum realized she had to pay money for the next tier of access. “I just wanted to see. It’s my friend. I’m like, ‘Hey, how far is she going?’” she reasoned.

“They say, allegedly, if you tip them they get back to you faster. So I was like, ‘Hey, love what I’m seeing, would love to see some more’,” Tori said, finally making the admission about how much money she really spent. “I ended up, in the course of two days, spending $400. I couldn’t stop” — and yes, all the money was spent on her friend. “God she looks god,” Tori complimented the former Real Housewives Of Beverly Hills star.

Denise publicly confirmed she was joining OnlyFans last July, just a week after her daughter Sami Sheen, 18, also got on the adult subscription service. “You own your content. The other sites, they can sell your content,” Denise said on KTLA last July. “We all post pictures with ourselves with bathing suits on Instagram and some of the other sites that there’s no difference other than you actually own the content,” she reasoned, calling OnlyFans “really empowering for the creators to be their true, authentic self.”

At the time, she also defended Sami’s decision to join the site. “A lot of us have posted pictures of ourselves on Instagram in a bikini or something that might be perceived as risqué,” Denise also said in the same interview. “And if my daughter chooses to post a picture of herself in a bathing suit on OnlyFans, why would she get backlash on that but not on Instagram?”