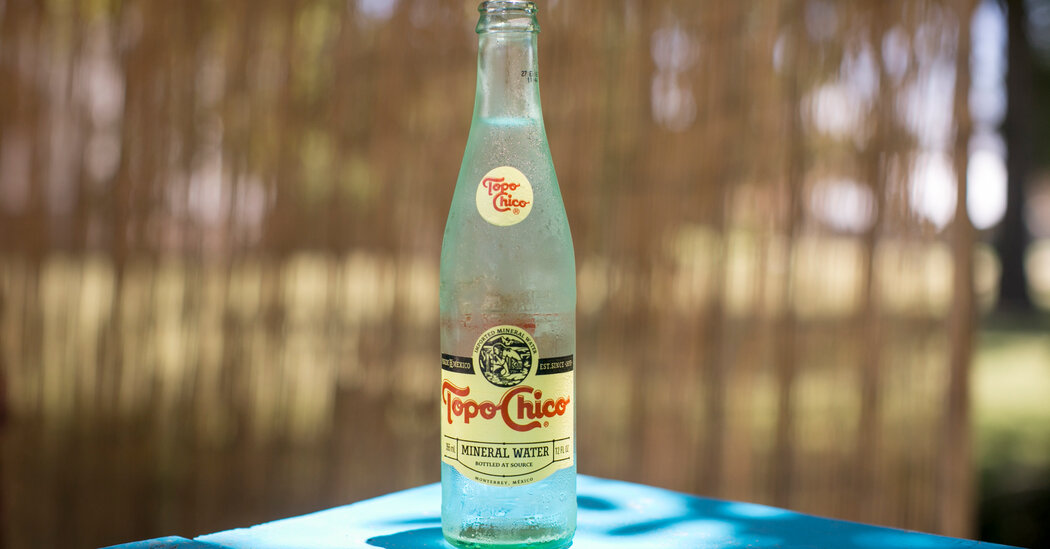 In just a few years, Topo Chico, the sparkling water sourced from Monterrey, Mexico, went from “big in Texas” to the bubbliest thing since spiked seltzer.

These days, hip restaurants in Brooklyn serve bottles of it alongside vegan empanadas and Oaxacan tacos. American grocery giants like Whole Foods and Kroger stock their shelves with it. In 2016, you could buy Topo Chico in 30 states. Now it can be purchased in all of them.

The brand’s growth is part of a much bigger trend — America’s seemingly insatiable demand for sparkling water — but there’s another secret to Topo Chico’s rapid success: The Coca-Cola Company.

The beverage company acquired Topo Chico in 2017 and significantly widened its distribution, making it one of the most popular sparkling waters today. Sales climbed quickly after the acquisition: Bloomberg reported that over one 12-month period from 2018 to 2019, sales rose 39 percent, to almost $130 million. According to Coca-Cola, those numbers continue to rise.

In a news release shortly after the acquisition, Matt Hughes, the vice president of venturing and emerging brands at Coca-Cola, said that Topo Chico fit into the corporation’s “evolution to a total beverage company” and investment “in brands that are on trend.”

“The premium, imported sparkling water category is growing double-digits,” he said. And, he added, “Topo Chico is a fast-growing brand with a lot of passion behind it.”

To put it another way: Topo Chico was already successful in markets where it was sold — notably Texas, which accounted for 70 percent of Topo Chico sales in 2017, according to Coca-Cola.

The beverage giant was simply expanding the seltzer’s reach.

“Once you get a product into those veins of the Coca-Cola system, it will end up everywhere,” said Bart Elmore, the author of “Citizen Coke: The Making of Coca-Cola Capitalism” and an associate professor of history at the Ohio State University. “Coke has built out their ability to service retail markets in the smallest corners of the world.”

Mr. Elmore described Topo Chico as a somewhat atypical product for Coca-Cola, however, because of its single-source nature. Since 1895, Topo Chico has been sourced from just one place — ​​Cerro del Topo Chico in northern Mexico. And that also hasn’t changed since the acquisition.

From its beginnings, Coca-Cola usually “stayed out of the business of owning” the infrastructure and bottling networks behind its product, Mr. Elmore said in an interview. Using bottled water as an example, he said, the company “would go into any given place and they would source the water locally, and that’s how you’d get bottled water to every nook and cranny.”

But Coke also has “the ability to take the finite resource from a client — a supply in one location — and put it through the commercial arteries of the globe to the very ends of those arteries,” Mr. Elmore said. “It doesn’t take a fifth grader to think, ‘Well, wait a minute, will there be enough blood to keep the whole system going?’”

Indeed, Topo Chico is currently experiencing a nationwide shortage, much to the chagrin of longtime fans. “Any update on when your supplies will be back? Can’t find your product anywhere in Austin, TX. What’s going on??” one devotee wrote on Twitter.

“Due to a deficiency in raw materials and the continued high consumer demand for Topo Chico, product availability has been impacted,” a Coca-Cola Company spokeswoman said in an email. “We’re working hard and implementing contingency plans to keep the products on shelves.”

Cesar Murillo, 26, of Dallas, went to six different stores in search of the sparkling water. He finally ended up finding some at his local Sam’s Club, where he took the chance to stock up. “Decided to get three packs while I had the opportunity,” he said. “I feel like a culprit too for getting three cases instead of one.”

Despite the acquisition, you won’t find “Coca-Cola” in big, splashy font on the front of any Topo Chico bottle. That’s likely intentional.

“You wouldn’t see us pushing the brand through a TV ad or radio ad,” Mr. de la Garza said. But paid advertising that promotes the brand’s partners or people who the company feels have “a distinct craft that matches our brand” is on the table. (For example, the brand has teamed with For All Things Good, a Oaxacan restaurant in the Bedford-Stuyvesant neighborhood of Brooklyn that serves cocktails made with Topo Chico.)

“We meet our consumers where they like to spend their time and where they shop, which allows them to discover Topo Chico on their own,” he said.

The “perceived Mexicanness” of Topo Chico is also used to market it, said Amanda Ciafone, the author of “Counter-Cola: A Multinational History of the Global Corporation” and an associate professor at the University of Illinois at Urbana-Champaign.

The brand logo is an image of an Aztec princess whose mysterious illness was cured by bathing in and drinking the water, as corporate lore has it. “It’s not Big Soda, you know?” Ms. Ciafone said. “It’s got this very traditional, old-fashioned trademark and glass bottle, and the taste of the drink has that intense carbonation.”

“It will cut into its own sense of brand value, its own worth, the more that Coca-Cola acknowledges that it owns it,” Ms. Ciafone said. “The sense of it is unpretentious and uncomplicated, which gives it a perception of credibility.”

It was this authenticity that attracted Michael Demsko, 27, who lives in the Ridgewood neighborhood of Queens. He had ordered a Topo Chico one night this summer, at Jajaja, a vegan restaurant in Williamsburg — the perfect thing to accompany his “delicious yet still overpriced burrito,” he said.

He was excited to try the drink, which he noticed boasted being around for more than a century. “Go ahead and drink your PepsiCo,” he joked. “We’ll be here doing it low-key slow-key.”

When informed that the drink had been recently acquired by the Coca-Cola corporation, Mr. Demsko expressed disappointment. “Nothing is sacred,” he said. “Like moths to light.”

Back to School, for Now

Law Roach, a Stylist Whose Best Creation Is Himself

Tiny Love Stories: ‘The Most Beautiful Man I Had Ever Seen’