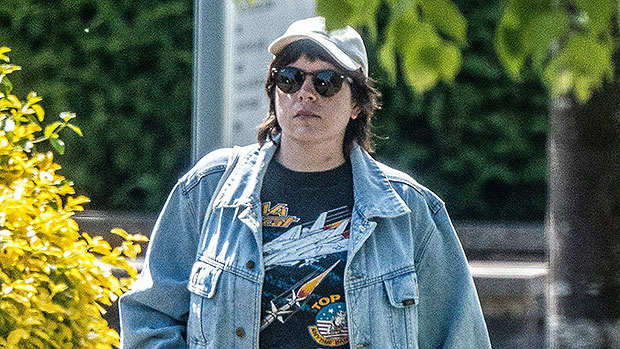 Isabella Kidman Cruise is repping her dad! The 29-year-old daughter of Tom Cruise and Nicole Kidman strutted her stuff on Tuesday in London while rocking a Top Gun t-shirt, aka the 1986 action-packed flick that starred her dad. She paired the look with an oversized jean jacket, black jeans, black combat boots and a white baseball cap. The young artist also rocked some dark-colored shades, reminiscent of her father’s Lt. Pete “Maverick” Mitchell’s, or perhaps the coolest pilot around (the one who’s making a comeback in the upcoming Top Gun: Maverick!)

Tom and Nicole adopted Isabella (and their son Connor) during their decade-long marriage in the ’90s. Isabella, who was born on December 22, 1992, took a page out of her father’s book by adopting a lifestyle away from the spotlight, however, she recently resurfaced on social media with a selfie on August 25, 2021and fans went wild. The new photo came four months after she last shared a photo of her face online, so her followers were elated to see her sharing a new picture of herself.

Bella gave her Instagram followers a rare glimpse of herself again on Sept. 24 last fall, posing in a selfie while wearing a white graphic top and red bandanna around her neck. She also wore a loose red knit hat over her dark red wavy shoulder-length locks and showed off a nose ring and a tattoo on her upper arm.

The beauty captioned the snapshot with just an emoji wearing a cowboy hat but she received a lot of responses that included many compliments. “The haircut is sensational Bella 💥👏🧡🧡🧡,” one follower wrote while another called her a “beautiful girl.” A third also called her hair “cute” and a fourth commented on her “glowing skin.” Others commented on her “stylish” outfit.

Before her latest selfie, Isabella shared a black and white photo of herself back in Feb. She was bundled up in a jacket and scarf and was standing outside in what appeared to be a snowy area. She also wore a knitted hat and gave a serious look to the camera.

‘Top Gun 2’: The Release Date & All The Latest Updates About The Sequel