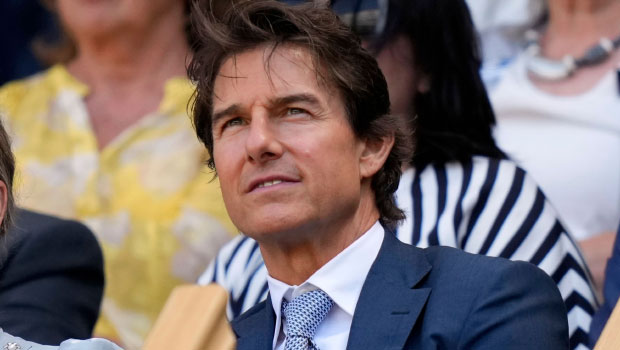 As if in a movie, Tom Cruise appeared on a mountainside via chopper, said a few amiable words to a couple of bystanders, and then charmingly glided off a cliff into the void. The Top Gun: Maverick star, 60, reportedly touched down on High Crag in the English Lake District via chopper, where Penrith, UK couple Sarah and Jason Haygarth were hiking with their dog, Edward. Tom seemed to have addressed them as though this were totally normal.

“Sorry for disturbing your peaceful walk with all the noise,” Tom said, per The U.S. Sun. “I like your dog.” Sarah then reportedly asked, “Are you really going to jump off there?” Tom indicated that yes, he was, as he ran toward the edge. “See you later, folks,” he shouted as he gracefully leapt off the cliff in full paragliding gear. The surreal scene was captured on video, which you can SEE HERE. It’s assumed that he was filming scenes for a seventh installment in the Mission: Impossible series of films.

Tom Cruise Then & Now: Photos Of The ‘Top Gun’ Star In Honor Of His 60th Birthday

Other images showed the exuberant couple smiling as a black helicopter hovered above the mountainside. Sarah reportedly told the outlet that the Risky Business icon was “as cool as a cucumber” as he flung himself off the cliff, while Jason noted that “Before this, the most famous person I ever met was [English journalist] Richard Madeley.” He also said that he saw Tom in a bathroom, adding, “This tops that by a country mile.”

Tom is famous for doing his own stunts in films like Top Gun and the Mission: Impossible franchise. During a a 2013 interview on The Graham Norton Show, Tom explained why it’s important to him to perform his own stunt work. “It has to do with storytelling,” he said, per Screenrant. “It allows us to put cameras in places that you’re not normally able to do.”