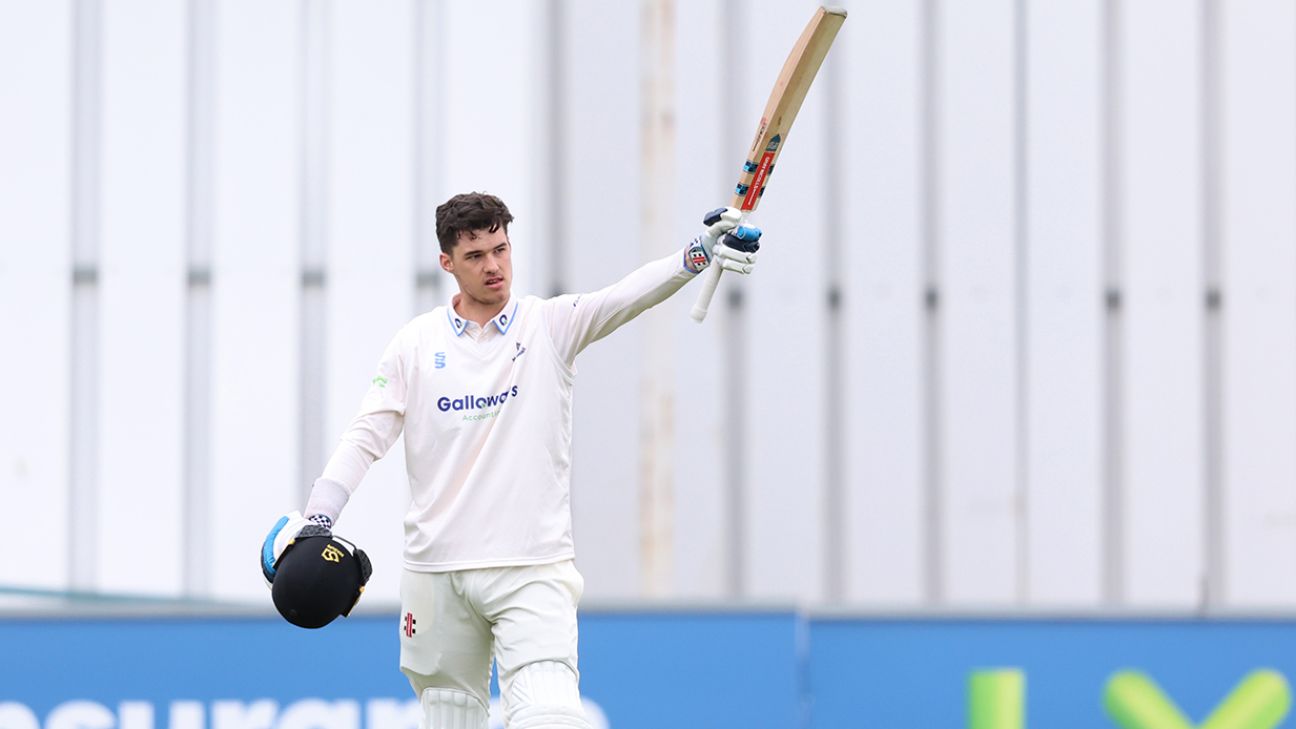 The age of optimism is coming to the Uptonsteel County Ground on July 31, but sadly for Leicestershire it is just the title of Paloma Faith’s latest tour. As far as the cricket is concerned, the atmosphere remains one of prolonged struggle and, in the battle between Division Two’s bottom two, it is Sussex who can anticipate a morale-boosting victory.

Tom Clark, with a second century of the season, a stylish, career-best 138, and Oliver Carter, a scampish wicketkeeper-batter whose 72 was also a personal best, were Sussex’s chief beneficiaries as they established a 176-run lead by the close of the second day with four wickets remaining. And there was a third PB later for 17-year-old Archie Lenham, who closed the day only four short of a maiden half-century.

Clark is 21, Carter a year younger and both suggested that Sussex’s youth policy in four-day cricket is beginning to bear fruit. Last week, they declared at Hove and Middlesex pulled off a sizeable run chase, but they will learn faster that way and it was good to see them go against this season’s trend, with an overly-tempting eight points for a draw, by pursuing victory. This week, they have bounced back with commendable spirit and are poised for ending a run of 17 Championship matches without a win.

On this occasion, they have also managed without a sizeable contribution by the India batter, Cheteshwar Pujara, who has made hundreds in his first four Sussex matches, a record unsurpassed in the county’s history. Pujara was lbw to Ben Mike’s first ball, which darted back sharply, and fell for 3, a marginal call perhaps but nothing untoward. Tom Haines‘ reputation is also rushing ahead, but his bullish 50 ended before noon when he dragged on a ball from Wiaan Mulder that was far too close to cut.

That left Clark and Carter to take charge with a stand of 140 in 40. Clark, an upright left-hander, met the left-arm spin of Callum Parkinson cautiously – he conceded only one of Clark’s 19 boundaries – but he was more assertive against the seamers. Carter, who offered a difficult chance to second slip, off Mike, when only 3, is in the mould of many wicketkeepers of past vintage: lively, diminutive and strong off the back foot. His longish, dyed-blond hair gives him the air of a bit of a free-thinker while Clark cuts a figure of sobriety and sound judgment. That said, it was Clark who almost ran himself out, on 31, but Mike’s throw flew wide with him several yards short of his ground. He saw off the second new ball with elan, but fell shortly before the close, trying to hit Parkinson over the leg-side – no wonder he had resisted it for so long.

The thousand-plus spectators who will take advantage of free tickets for this match were given an early lesson in Leicestershire’s grim realities as only five wickets fell in the day. They brought a refreshing change to the narrow demographic for Championship matches with more women, young people and minority ethnic groups sprinkled among the largely elderly, white supporters base whose expectations of success have been weathered by time. More than ever, as afternoon sunshine blazed down, and Sussex’s next generation developed before your eyes, it invited disbelief that anybody would be so wanton as to want to throw this away. To do so in Leicestershire would be a betrayal of multi-ethnic potential just as the mood was changing. To accept that, though, demands trust: we have been this way before.

Leicestershire’s offer of free tickets sounds more than tokenism; this time, at long last, it may be the beginning of a cultural shift. They are interviewing for a community director, a senior figure who will be tasked with transforming relationships with minority ethnic communities. Sean Jarvis, their chief executive, said: “We have 56 different nationalities in Leicester according to the last census. Afghans, Pakistanis, Indians, Sri Lankans, a real eclectic mix of cricket nations. A community director is about getting into communities and understanding them. Being in amongst it. They’ve got to be pressing palms and understanding cultures. What we call the South Asian community has many different beliefs and religions and is so fragmented. It’s not an easy job but we are committed to it.”

There are influential figures in English cricket, not to mention Kevin Pietersen, who would cull Leicestershire, and possibly Sussex too, at the merest excuse. Talk of a divisional structure next season of 12 in the first division and six in the second is such a blatant attempt to downgrade the six that a five-year-old could see it. It won’t happen, the question is, what will?

Unsurprisingly, conversations between Jarvis and his Sussex counterparts have touched on the future structure of the game. Jarvis comes from a football and rugby league background – he once bought Oldham Athletic for £1 – and, as such, his loyalties to cricket tradition are not as deeply embedded. Personally, he would be receptive to three divisions of six (or even an expansion to seven), and a reduction in Championship cricket, but the counties’ vetting group that will give initial feedback on ECB proposals is unlikely to find that a universal view. If they want to influence the future they first need to agree among themselves.

The democracy of football, with its extensive pyramid system right down to the lower levels, leaves Jarvis aghast that everybody in cricket does not value the same. Mutterings about the benefits of a reduction in the counties just feels like a cash grab by the Test counties.

“It could be an attempt to focus revenue on the elite, but we have to have a feeder system,” he said. “Counties like us have to stand shoulder to shoulder. We both believe in the game, we both want England to succeed, we both think there’s a role for Leicestershire, Sussex, for all those teams outside the Test grounds.

“Do I think we can do better? Yes, of course. Do I think we can improve our business model on and off the field? Without question. But in rugby league, nobody responds to an England defeat by saying ‘let’s get rid of Castleford or Huddersfield Giants’. Their value to the game, and to their communities is understood.

“As a business, on the field we have had a long barren spell and the club has become disengaged with the business community, and facilities need revamping. We need to be more innovative and creative and give people a reason to come. And we need an alignment of the stars. What’s happened here in the past has been a lot of false dawns. Great pictures then it all fades away. This time I am trying to create a plan we can deliver. But we need friends. I can’t do it by myself.”