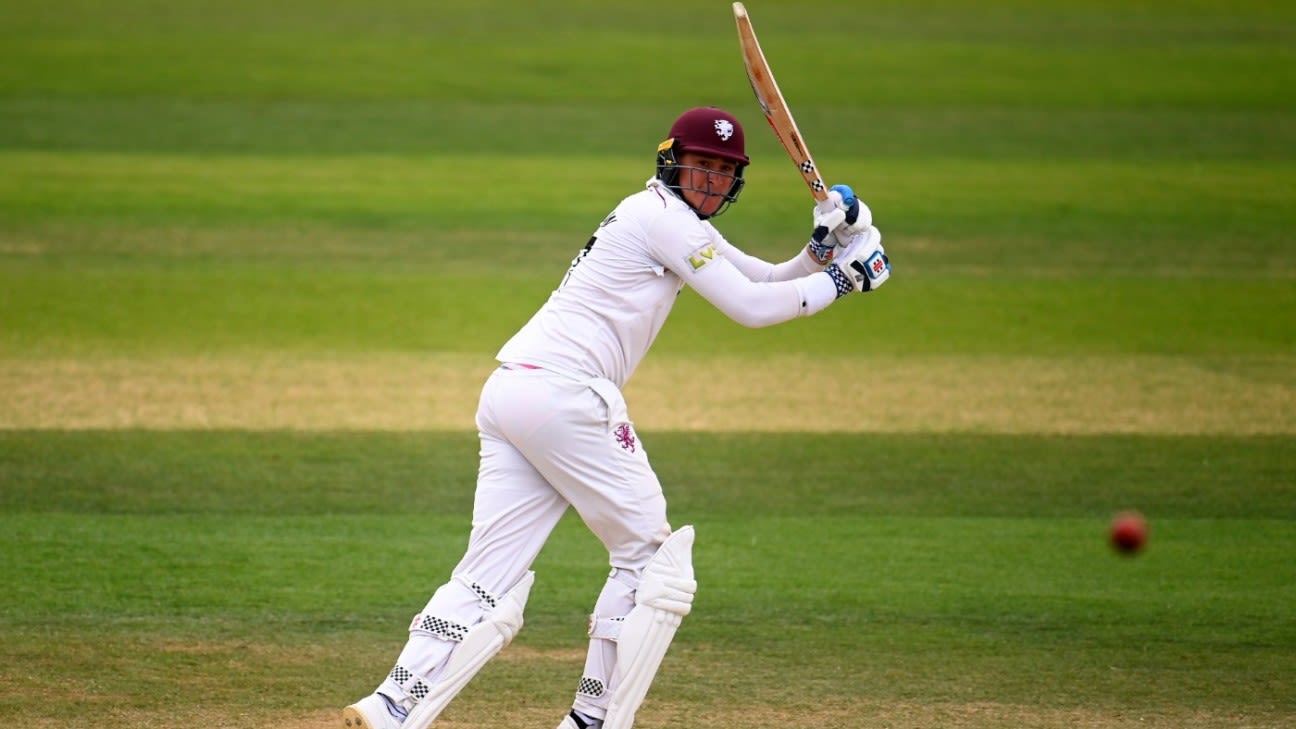 Somerset’s satisfaction over mounting a successful resistance movement in Harmer Land was tempered by a hamstring injury to their inspirational captain, Tom Abell, which could threaten his involvement in the rest of the season as well as questioning his involvement in The Hundred.

Abell missed two months with a hamstring injury last year and ultimately managed only one match for Birmingham Phoenix, where he is again contracted this season.

It could be Friday, back in Taunton, before Somerset fully evaluate the injury, but they will be relieved that it is a different leg from the one that has bedevilled him in the past. Jason Kerr, their head coach, said: “Tom’s hamstring is pretty sore. We are looking to get a scan as quickly as possible, probably Friday back in Taunton. The first 24 hours will give us some information but hopefully it is not too serious and is just a tweak. He is in the form of his life coming off the back of a century last week and he was looking like getting another one so hopefully he is not out for too long.”

Concern about Abell apart, a solid draw against Essex at Chelmsford would be a decent outcome for Somerset in their attempt to salvage their Division One status, not that anybody knows how Division One will look next season as the Championship continues along its merry way in blissful ignorance about what the future holds.

Matt Renshaw’s 146, as responsible as Nick Browne’s double hundred had been for Essex in the first two days, was an impressive retort, even allowing for a slow surface which helped to negate Harmer’s threat at a ground where his offspin often causes havoc. It was his highest Championship score, the reward for six-and-a-half hours’ unstinting concentration.

Kerr took the purist’s view – the coach’s view – terming it an “incredibly exciting day”, although “impressive” would have been easier to allow.

He said: “I think it was an incredibly exciting day, we were under an incredible amount of pressure. Whenever a team scores 500-plus, the scoreboard naturally creates some pressure and they have one of the best bowlers in the world in their side. Despite the wicket being slow, we knew it was going to be a challenge. Renshaw was outstanding. The way Matt played Harmer in particular was outstanding.

“Renshaw and Abell’s partnership saw the runs flowing and had the scoreboard ticking nicely, which wasn’t easy with the pace of the pitch. That led to some exciting and competitive cricket… but I guess for the neutral it was quite attritional.

Harmer took two of the three wickets to fall and, even though his turn was desultory and what edges there were died well in front of the close fielders, he was still the dominant presence of an attritional day as he extended his figures to 2 for 84 from 48 overs. But Somerset have averted the follow-on with ease and the dreariest of draws looks inevitable.

Abell, 27 not out overnight, accompanied Renshaw well into the afternoon, but he was forced to retire on 90 after he appeared to damage a hamstring taking a second run when their partnership had grown to 193 runs. Neither approached the enterprising style that had marked the beginning of their stand the previous evening, but with Somerset scheduled to face four sides in the bottom half when the Championship resumes in September, a draw will leave their fate very much in their hands.

On his 100th first-class appearance, Adam Rossington was absent having taken a blow on a finger when he badly dropped Renshaw in the first over of the innings; the implications of that became painfully obvious. Will Buttleman stood in behind the stumps throughout the day, and he had a hand in Renshaw’s dismissal when he moved down the leg side to intercept a gloved hook against Aaron Beard.

Renshaw, who has made five of his 15 first-class hundreds for Somerset, in two spells, found his concentration wavering after he reached three figures and he was twice reprieved, in consecutive overs, by Alastair Cook at first slip when on 106 and 108. The first, off the legspinner Matt Critchley, low to his left, was most catchable.

George Bartlett played Harmer with confidence and his straight six took Somerset’s second-wicket stand to a record against Essex, but he was caught off the glove at short leg attempting a reverse sweep.