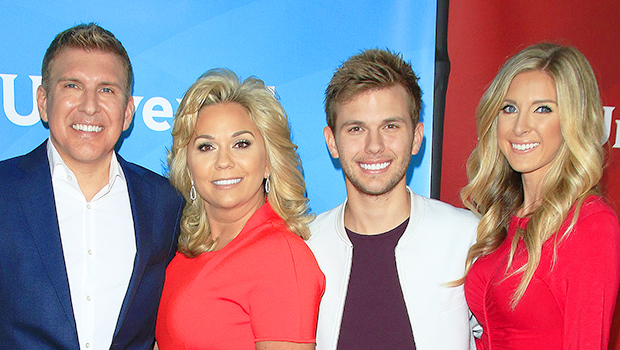 Lindsie Chrisley and her grandmother Nanny Faye both made an “impromptu” trip to see Todd Chrisley after he started his prison sentence for tax fraud over the weekend. The duo reportedly visited the Chrisley Knows Best star, 53, just days after his sentence began, according to Entertainment Tonight. Lindsie, 33, spoke a bit about taking the “last minute trip” during her The Southern Tea podcast on Wednesday, January 25.

It’s not clear whether Lindsie and Nanny, 79, visited Todd on Saturday or Sunday, but the visit came shortly after his sentence began on January 17. During her podcast, Lindsie detailed being worried about her grandmother’s driving and a funny anecdote about her falling over during their stay in a hotel room. She didn’t mention that the two of them had visited her dad.

Later in the discussion, she revealed that she had seen that some people were wondering where she and Nanny were during their weekend road trip. Later in the podcast, she also admitted that the prison sentences for Todd and Julie has been hard on the family. “My family struggled through a lot with my parents this year,” she said. “So many things that happened legally. Though the outcome wasn’t what we wanted, there is some sense of peace and closure and now we have the opportunity to be able to adjust.”

Todd and Julie both turned themselves in to prison on Tuesday, January 17. Todd reported to the Federal Correction Institute Pensacola, while Julie began her seven-year sentence at Federal Medical Center Lexington in Kentucky. After their sentences began, a source close to the family revealed to HollywoodLife exclusively that they’ve had “several phone calls” with their kids and family, and the family was planning to make time to see both parents, even though it’s a little more difficult to reach Todd in Florida. “They are doing the best they can, considering their circumstances. The family is planning to visit them within the next several weeks and their visits will be staggered,” they said.

Before the reality stars began their prison sentence, both Todd and Julie recorded an episode of their podcast Chrisley Confessions, which was released a few days after they began the sentences. During the podcast, they both seemed optimistic and tried to put their problems “in perspective,” acknowledging that some people had bigger troubles. “I know that this may be my future for a minute, but I also have faith that the judicial system is going to turn it around. I also have faith that the appellate court is going to see this for what it is,” Todd said on the podcast.

Todd Chrisley’s Kids: Everything To Know About The 5 Children He Shares With Julie