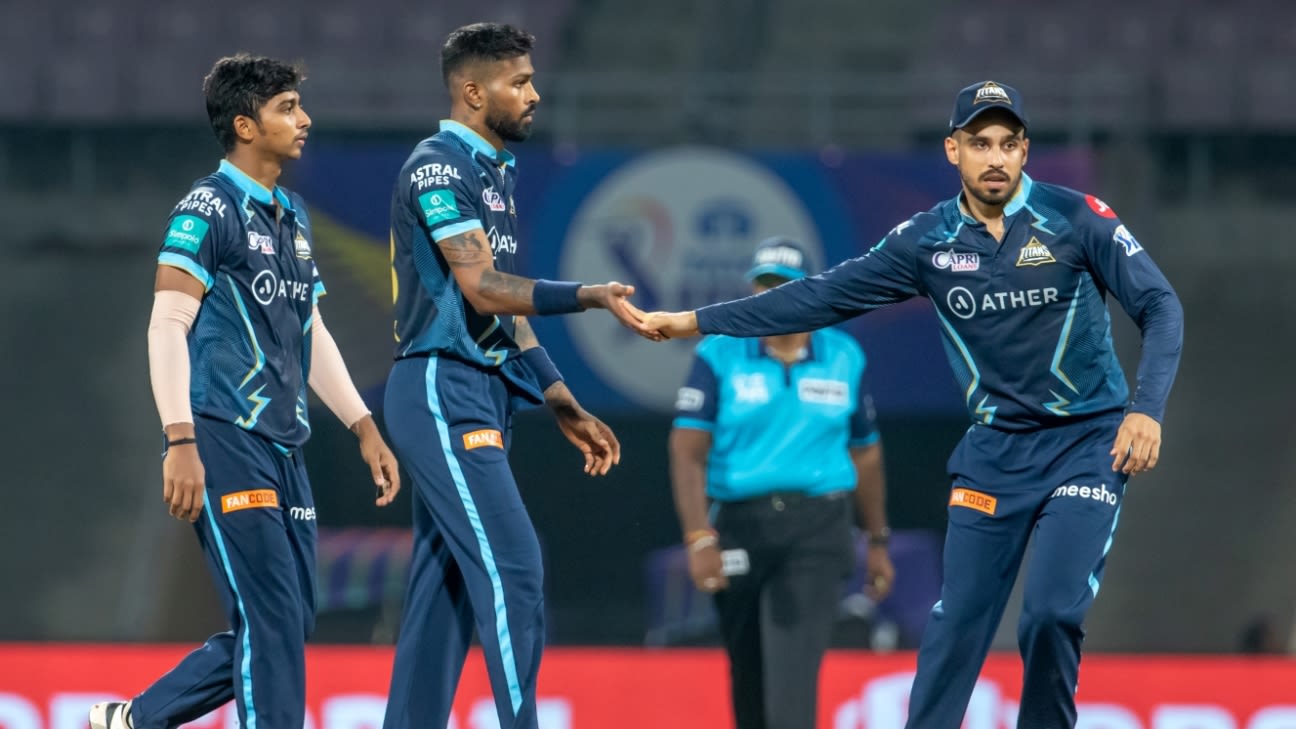 After Gujarat Titans turned an equation of 48 from 18 balls – and a win likelihood of 4.20%, according to ESPNcricinfo’s Forecaster – into a three-wicket victory over Chennai Super Kings last week, David Miller, the Player of the Match for his unbeaten 94 off 51 balls, made a rare acknowledgment of the role of luck in T20 cricket.

“We could have probably lost four out of six [matches], and we’ve won five out of six,” Miller said at the post-match presentation. “The dice has definitely rolled onto our side.”

Titans sit atop the IPL 2022 table (before Friday’s match) because they are a team with multiple match-winners who have made important contributions at various points, but you can’t deny that luck has gone their way in almost every tense situation – here’s looking at you in particular, Odean Smith.
As the halfway point of the season nears, therefore, you might wonder how Titans will cope if their luck were to turn. It isn’t as if the deficiencies that were widely noted in their squad before the season have disappeared. For example, while their bowling is top-notch and their middle and lower order have considerably outperformed expectatations, their top order, Shubman Gill apart, has been a worry. Of all top threes in IPL 2022, Titans’ has the lowest collective average (19.11) and strike rate (119.86).

Their opponents on Saturday, Kolkata Knight Riders, will be desperate to end a run of three successive defeats and to find some sort of fix for a bowling attack that twice conceded 200-plus totals in those three games.

Umesh Yadav began the season as its best powerplay bowler, with six wickets and an economy rate of 5.18 in that phase in Knight Riders’ first four games. In their last three, however, he has gone wicketless in the powerplay and conceded 8.43 runs per over. Pat Cummins has leaked runs across phases – at 12.00, his economy rate is the worst of all bowlers to have delivered at least 10 overs this season. Varun Chakravarthy, meanwhile, has looked a shadow of his usual self, with an economy rate of 8.84 to follow two seasons in which he went at less than 7.

These are bowlers who lack neither skill nor experience. If Knight Riders can find a way to sort out their troubles, they have, in Titans’ top order, a clear weakness to target at the DY Patil Stadium on Saturday. The question, though, is: can they?

Groin stiffness forced Hardik Pandya to miss Titans’ last match, against Super Kings, but with Titans getting a five-day gap between that game and Saturday’s clash, their captain is likely to be back. It will be interesting, however, to note what kind of bowling workload he takes on.

In the same period, Shreyas has been out twice to Rashid Khan in 55 balls, while only scoring 51 runs.