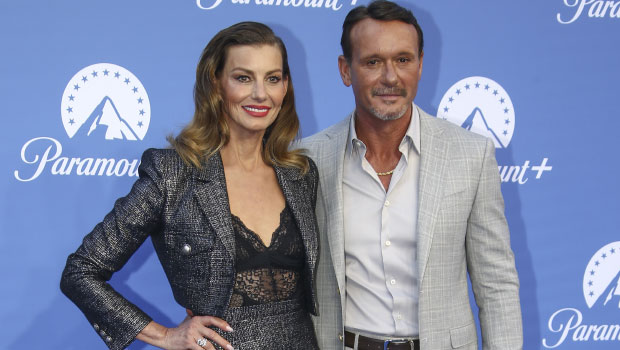 It’s a date night for Tim McGraw and Faith Hill! The famous couple sweetly smiled together at the June 20 Paramount+ UK Launch event in London and looked as in love as ever. Tim, 55, sweetly wrapped his arms around his wife and held her by the waist as they posed on the carpet. Faith, 54, donned a gorgeous ensemble consisting of a sparkly high-waisted dark gray pencil skirt and matching cropped blazer. The blazer was left open to reveal her sexy sheer lace bodysuit underneath. She finished the look with a pair of black heels and accessorized with dangling earrings. Her hair was brushed into soft, elegant curls and she wore a bright coral lipstick to add a pop of color.

Tim, for his part, wore a light gray plaid suit with a white button-down shirt underneath. Black shoes and a black belt completed his look. The “Live Like You Were Dying” singer left his cowboy hat at home and styled his hair neatly into a comb-over.

The pair were celebrating the Paramount+ entry into the UK streaming market, as their show, 1883, a prequel to the hit Paramount show Yellowstone, airs on the service. In the series, they play husband and wife James and Margaret Dutton. Faith recently opened up about the troubling part of playing her character in Variety‘s “Actors on Actors” series: not shaving her armpits. Apparently, Yellowstone co-creator Taylor Sheridan relayed the news to her that she was not allowed to shave her underarms anymore while at a family wedding, and she was not excited about it. “It really grossed me out, I have to say,” she shared. “All due respect to those who love that, and all that freedom, woo!”

Meanwhile, Tim opened up about a very real part of filming 1883 to Jimmy Fallon on May 18: He let Faith actually slap him during an intense scene. “We talked about it before,” the country crooner revealed on The Tonight Show With Jimmy Fallon. “We don’t want to do a TV slap. We want to do a real slap, but after about the eighth take, I was concussed a bit.”

Other than the real slap, Tim and Faith certainly show plenty of PDA. Faith celebrated Tim’s 55th birthday by posting a sexy photo of them in the bathtub, which was actually an outtake from a scene in 1883. “Oh, you say it’s your birthday, Tim McGraw?” she captioned the image. “Um…what about a date tonight? K….see ya later. Love you, too.”

Plus, in 2021, Tim credited Faith with helping him get sober. “I remember a moment when I was getting out of bed and going to the liquor cabinet and taking a big shot at 8:00 in the morning and thinking, ‘I have to wake the kids up,’” he wrote in a raw essay for Esquire. “I went straight to my wife and said, ‘This is where I’m at.’ I was scared. She just grabbed me and hugged me and changed my life.”