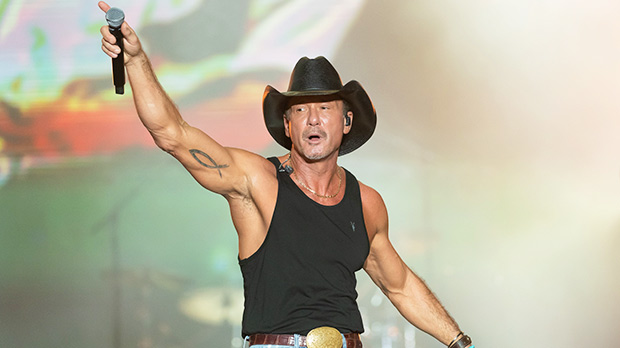 Ouch! Tim McGraw, 55, fell off the stage and into the crowd at his concert on Saturday, September 17. The “Humble and Kind” singer was performing at the Boots In The Park concert series in Arizona when he kneeled down near the edge of the stage and faced towards his guitar player, who was executing a solo. But Tim lost his balance as he tried to get back up and plummeted off the stage’s catwalk and into the crowd in the front row.

Luckily, Tim’s security team was standing right there and helped break the country superstar’s fall. Tim was all disheveled before he stood up with a smile on his face and briefly interacted with the fans standing near where he fell. The 1883 star got right back on the stage and kept performing, as the crowd cheered for his impressive recovery.

Tim’s rep confirmed to ET that he was not injured in the fall. The incident was captured on video from several different angles and spread like wildfire on social media, including on TikTok. While fans were entertained by Tim’s fall, they were more concerned about his well-being and were happy to hear that he’s just fine.

Tim’s not the first performer to take a nasty fall at a concert this month. Post Malone, 27, fell through a hole in the stage at his show in St. Louis on the same day of Tim’s incident. After medics rushed to help Post, the rapper returned to the stage, jokingly apologized to the crowd, and continued with his concert. The “Circles” singer addressed the incident in a video after he left the hospital the next day.

“Everything’s good. They gave me some pain meds and everything, so we can keep kicking a** on the tour,” he said. “I just want to apologize to everyone in St. Louis, and I want to say thank you guys so much for coming to the show. And next time I’m around this way, we’re gonna do a two-hour show for you so we can make up for the couple missed songs that we missed. Thank you guys for your support and thank you for your love. And thanks for hanging around even though I got my a** kicked by myself,” Post added.