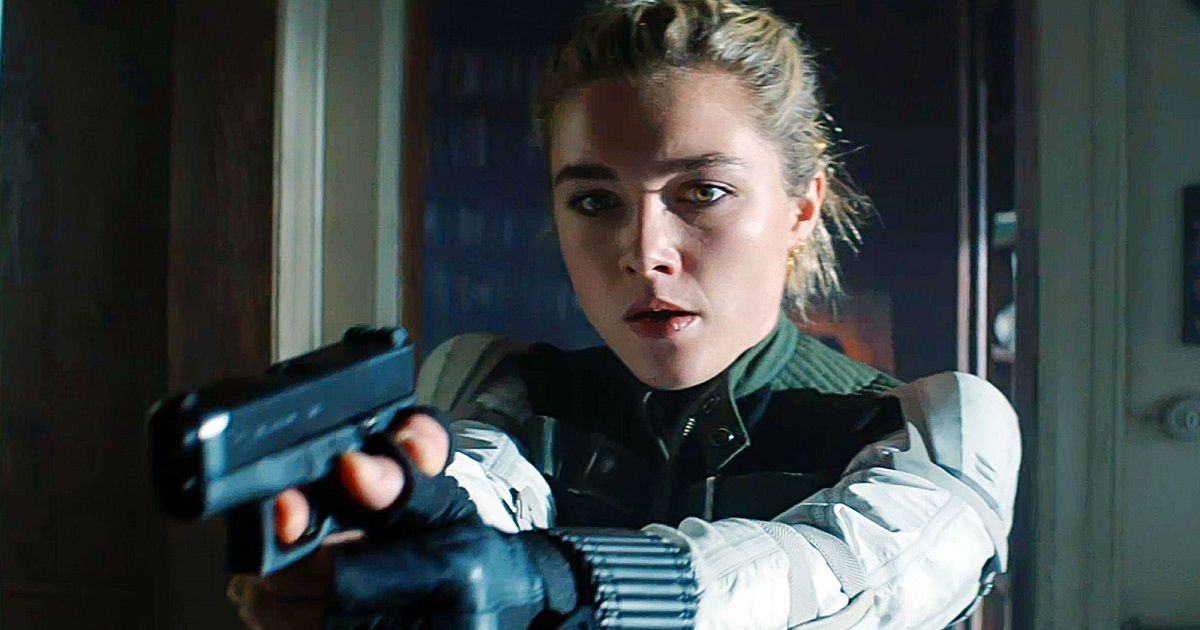 Another day, another Marvel rumor, this one surrounding the upcoming antihero adventure, Thunderbolts. According to Deadline’s Justin Kroll, who made an appearance on Matthew Belloni’s The Town podcast, Thunderbolts will be led by Black Widow star Florence Pugh, who will reprise her role as Yelena Belova.

“[Florence Pugh] has got the Marvel superhero that’s already got a spin-off. Upcoming for her, actually, on that character is this Thunderbolts film, which is basically Marvel’s Suicide Squad. Hopefully, it has better results. But the concept is it’d be her leading the team of like Wyatt Russell’s [John Walker], Daniel Bruhl’s [Zemo], those anti-heroes that aren’t exactly good but aren’t exactly bad. So there’s that. And people seem to like the Yelena character.”

Introduced in last year’s Black Widow, Yelena Belova is the sister of Scarlett Johansson’s Natasha Romanoff, and was also trained in the Red Room as a Black Widow. Poses sing the same vast skill-set as her sister, Belova has already shown herself to be a formidable force within the MCU, with the ever-reliable Florence Pugh already crafting a likable character.

As well as revealing that Yelena, who was last seen hunting down Clint Barton in the Disney+ series, Hawkeye, it has also been rumored that the rest of the Thunderbolts will be comprised of John Walker / U.S. Agent (Wyatt Russell), Baron Zemo (Daniel Bruhl), Yelena Belova (Florence Pugh), Taskmaster (Olga Kurylenko), Abomination (Tim Roth), The Winter Soldier (Sebastian Stan), and Ghost (Hannah John-Kamen).

Wyatt Russell Insists He is Still Awaiting a Call from Marvel

The Falcon and the Winter Soldier star Wyatt Russell is expected to return to the MCU in Thunderbolts, with John Walker aka US Agent often depicted in the comics as a member of the antihero team. Despite this, the actor has insisted that he is still awaiting a phone call.

“I’m still waiting. I know they’re doing it. I know that they’re planning it,” he said. “I gotta imagine that there’s something in there for me. But yeah, until you get that true actual prompt, like, ‘Okay, this is your start date. And this is when you’re coming, and this is when you rent your house, and this is when logistically you need to start setting up to do these things.’ That’s when I shift my mindset to going to do that, you know? Other than that, before you get that call, things can change on a dime, you never know.”

Wyatt hopes that he will be asked to come back for more. “No, you never know. They do a really good job of keeping it secret,“ Russell explained. “It’s part of the allure. You always hope that you can come back and you hope that you’ll get the phone call. If I pick up the phone and it’s Marvel on the other end of the line, you’re like, ‘All right, cool. Let’s go to work.'”

Thunderbolts is scheduled to be released on July 26, 2024, as part of Phase Five of the MCU.