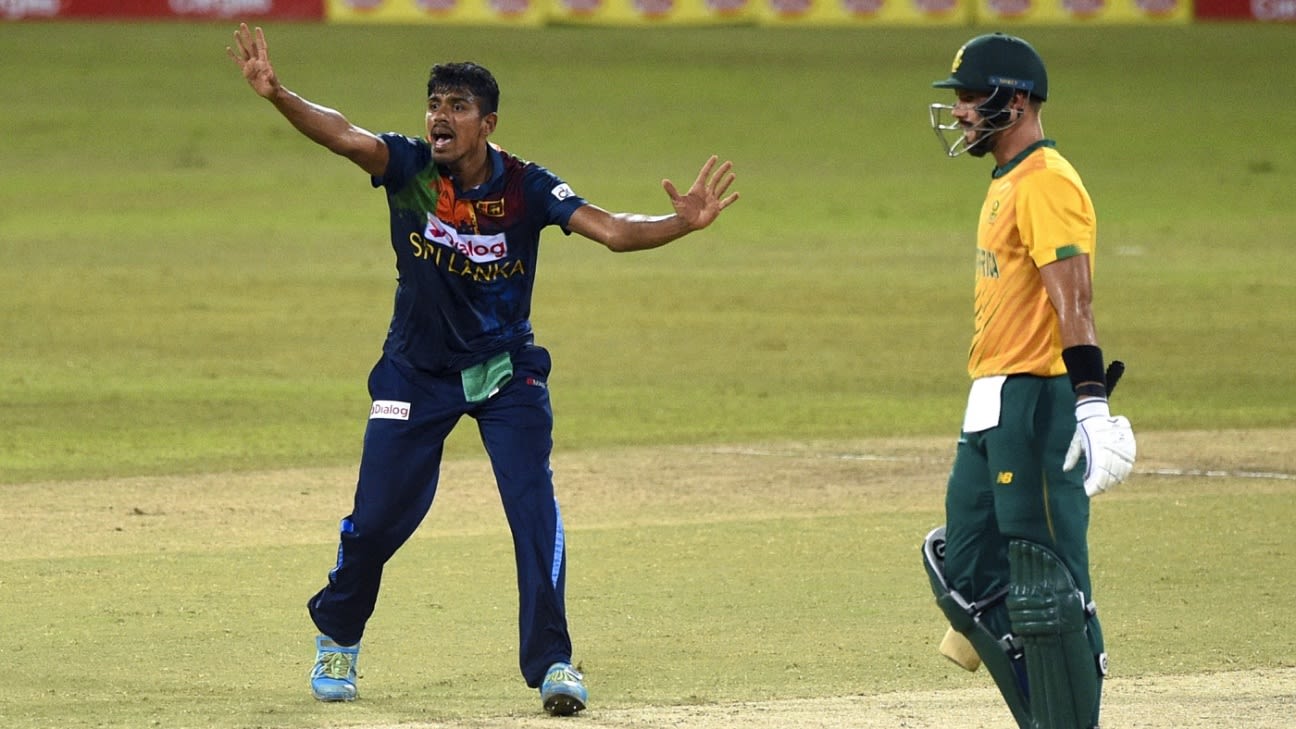 Sri Lanka’s new mystery spinner Maheesh Theekshana is expected to make the men’s T20 World Cup squad, as are top order batters Bhanuka Rajapaksa, and Kamindu Mendis.
Left-arm spinner Praveen Jayawickrama also makes the squad, as does fellow spinner Akila Dananjaya, and left arm seamer Binura Fernando. The veteran seamer Nuwan Pradeep is expected to miss out on the main squad, and is instead understood to be in the reserves. Due to Covid-19 restrictions, teams are allowed to name four stand-by players who will travel with the 15-man squad, to act as injury replacements should the need arise.
There were no major omissions from the side, aside from the likes of Niroshan Dickwella, Kusal Mendis, and Danushka Gunathilaka, who were banned for a year for breaking Covid protocols on the recent tour of England. Minod Bhanuka, who has kept wicket in Kusal Perera’s injury and illness forced absences, has not made the squad either.

Although the ICC deadline for the naming of the World Cup squads was September 10, Sri Lanka Cricket has not officially named its squad. It is understood that Sri Lanka’s sports minister has not yet approved the squad. Sri Lanka teams must be signed off by the minister, by law.

Theekshana’s inclusion follows his sparkling ODI debut, in which he took a Sri Lanka record of four wickets, as his team comfortably defeated South Africa. Theekshana, who bowls a well-disguised carrom ball and googly in addition to his offbreak, had also performed well in the recent domestic T20 invitational league, organised by SLC.

Rajapaksa’s inclusion, however, is down more to perceived reputation. A star batter on the school circuit over a decade ago, Rajapaksa has an unremarkable domestic record. In seven T20 international innings so far, he has 140 runs at a strike rate of 130, though he did play one match-winning 77 off 45 against Pakistan in 2019. His ODI returns have also been modest.

Kamindu, meanwhile, makes the team on the back of an excellent T20 invitational tournament, as well as for his all-round ability. Though batting is his primary skill, Kamindu is also known for his fielding, and can bowl finger spin with either arm.

Left-arm spinner Jayawickrama is the only uncapped member of the squad. He had had an outstanding Test debut against Bangladesh, in which he claimed 11 wickets, earlier in the year. Since then, he’s played five ODIs and taken five wickets at 35.50. He is an inexperienced T20 player at even domestic level though – he’s bowled in only 13 domestic innings, although he has been effective across those games, taking 12 wickets and going at only 5.13 an over. He will be part of a spin contingent that features Wanindu Hasaranga, Dananjaya and Theekshana. Legspinner Pulina Tharanga, who impressed in SLC’s invitational T20 tournament, is expected to be among the reserves.
On the seam-bowling front, Sri Lanka are led by Dushmantha Chameera, with Binura (who has only played four T20 internationals), and allrounder Chamika Karunaratne also there. Pradeep, along with Lahiru Kumara, and seam-bowling allrounder Lahiru Madushanka, are expected to be in the reserves.

Sri Lanka must play the qualifiers, where they will face Namibia, Ireland, and the Netherlands. They will also play two T20 internationals against Oman in the approach to the World Cup, on October 7 and 9.