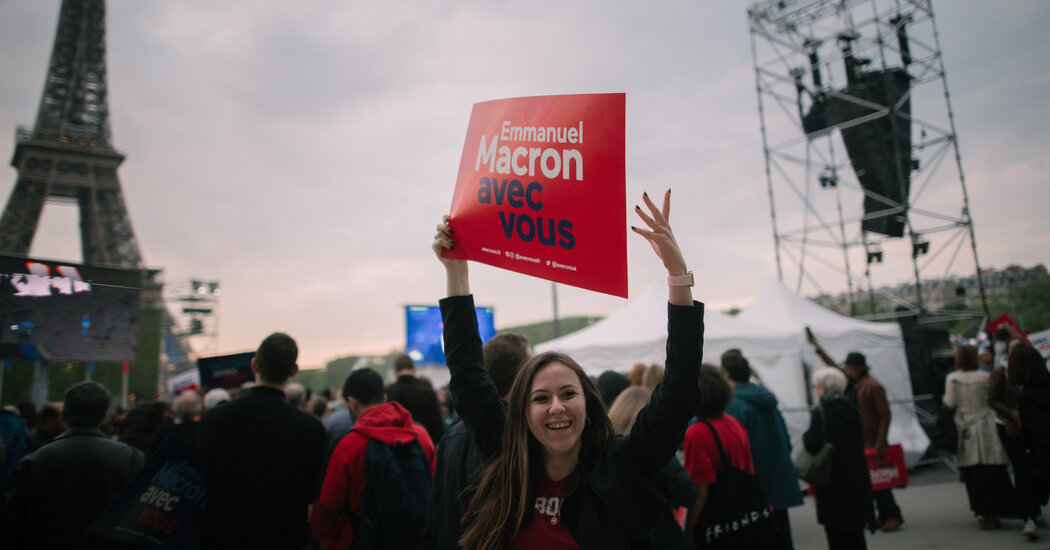 You should know at least two crucial facts about the French presidential election, whose final round was held last Sunday.

The first is that Marine Le Pen, the far-right candidate known for her warm relationship with Vladimir Putin and her hostility toward the European Union and immigrants, lost the election — but with the best showing that her party has ever had, carrying 41.5 percent of the second-round vote.

The second is that Emmanuel Macron, the incumbent president from the center-right En Marche party, won the election — but with the lowest share of registered voters of any candidate since 1969, because of historically low turnout and high numbers of votes that were cast blank or spoiled in a show of protest.

Of those two facts, the first has garnered the most attention. But the second may be more important.

In the first round of the presidential election, Macron came in first, but with nowhere close to a majority. He got barely more than a quarter of the total votes, with 27.85 percent. Le Pen came next with 23.15 percent, and the leftist candidate, Jean-Luc Mélenchon, got 21.95 percent. The rest of the votes were divided between smaller parties.

That’s actually pretty common: Today, in many mature democracies, it’s uncommon for any party or ideological faction to get more than about a third of the votes. In the German federal election last year, the center-left party came first, but with only 25.7 percent of the vote — strikingly similar to the numbers for Macron in the first round. In multiparty parliamentary systems, that results in coalition governments in which two or more parties work together — take Germany, again, where a three-party coalition now governs.

But in direct presidential systems, the winner takes all. And for many voters, that means that elections are less a matter of who they want to support than of who they most want to oppose.

So when Le Pen made the second round runoff of the French election, the contest took on the tenor of a hostage negotiation. Macron argued that Le Pen was an existential threat to France, and called for all other candidates’ supporters to unite behind him in order to prevent her from winning the presidency. Mélenchon, the leftist candidate, made a similar plea to his supporters. “We know who we will never vote for,” he said on April 10. “We must not give a single vote for Madame Le Pen.”

In the end, enough voters aligned behind Macron to keep the far right out of the presidency. And it seems that many heeded the calls to hold their noses and vote for Macron, despite their aversion to him, in order to protect the country from the far right: According to one poll, about 45 percent of those who voted for him did so only to oppose Le Pen.

But the same poll found that the opposite was also true: About 45 percent of Le Pen voters were more interested in opposing Macron than in supporting the far right. Other data bears that out: The overseas French territories Martinique and Guadeloupe supported Mélenchon in the first round, but then gave a majority to Le Pen in the second.

Others withdrew entirely. Abstentions and blank ballots hit record highs in this election — a notable development in France, where turnout has historically been around 80 percent.

A warning from history

Experts who study France’s history of revolutions and democratic collapse see signs of danger in a system that pushes a wide spectrum of voters into a binary choice between what some see as the lesser of two evils.

So how do you tell the difference between normal political anger that can work itself out through a series of elections without leading to serious instability, and something dangerous enough to require structural change to the system itself?

“That’s the question of French history, right?” Terrence Peterson, a political historian at Florida International University, told me. “Historians have been asking that question about France for a long time, given its history of repeated revolutions.”

He saw particular cause for concern in the rising levels of abstentions. “When voters express that they feel disenfranchised, if a majority of them do, then that’s a clear sign” of serious trouble, he said.

Some in France have begun to call for an overhaul of the Constitution to make the system more representative. Mélenchon has called for a new Constitution to be drafted via a people’s constituent assembly. In an editorial last week in the French newspaper Le Monde, Frederic Sawicki, a political scientist at Pantheon-Sorbonne University, argued that the lack of proportional representation had brought the far right “to the gates of power” in France.

Camille Robcis, a Columbia University historian who studies 20th-century French politics and institutions, said that she was not surprised to hear such calls. “You have a kind of disconnect between the representatives and the popular vote, the electorate,” she said. “The result is that these disenchanted, disenfranchised voters are moving to the extremes.”

How am I doing?

I’d love your feedback on this newsletter. Please email thoughts and suggestions to interpreter@nytimes.com. You can also follow me on Twitter.

Sign up here to get this newsletter in your inbox.

What to Watch For in the Pennsylvania and North Carolina Primaries

Republican ‘Chaos’ in Pennsylvania Threatens to Upend the Midterms

A Fringe Conspiracy Theory, Fostered Online, Is Refashioned by the G.O.P.

Fetterman Recovering After Stroke Before His Senate Primary

How Hollywood and the Media Fueled the Political Rise of J.D. Vance

With Roe in Peril, Thousands Gather at Marches for Abortion Rights

Gearing Up for G.O.P. Gains, White House Braces for Barrage of Inquiries

McConnell and other Republican senators make a secret visit to Ukraine.

How ‘Just a Dude’ in Shorts Became a Senate Front-Runner