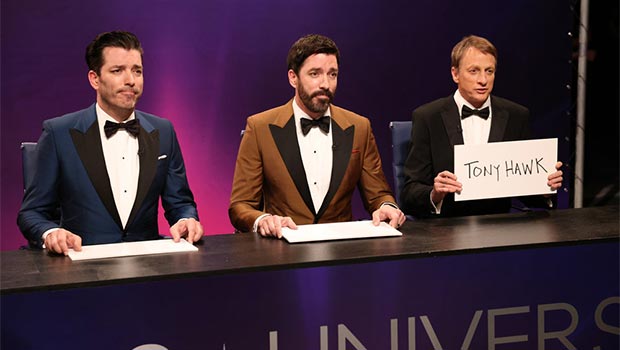 Aubrey Plaza got a little help from some hilarious celebrities during her hosting gig on the January 21 Saturday Night Live episode. The Property Brothers Jonathon and Drew Scott, and Tony Hawk stopped by Studio 8H to join in on a Miss Universe sketch, which was taken from a viral meme of the contestants screaming the name of their homeland. Playing judges of the beauty pageant, the HGTV stars and the skateboarding legend surprised fans and brought down the house! Check it out below.

The “White Lotus” actress got to show off her comedy chops by playing Miss France, who screams her answers much like the real-life counterpart did in the viral meme. When the host of the Miss Universe pageant, played by Kenan Thompson, asks for the judges scores, Tony steals the spotlight as he screams his answer even louder than Miss France!

Ahead of the episode, which featured Sam Smith as the musical guest, Audrey also flaunted her celebrity impressions in a teaser alongside Chloe Fineman. “I’m excited,” Aubrey said about hosting SNL for the first time. “And oh my God, I love your impressions. Drew Barrymore is my favorite,” she told Chloe. After Chloe gave a little piece of Drew, Aubrey tried to top her by impersonating Marcia Gay Harden in Pollock and Annette Bening in American Beauty.

The actress also appeared on The Tonight Show Starring Jimmy Fallon this week and revealed she once auditioned for the famed comedy show but didn’t make the cut! “I didn’t make it to the Lorne [Michaels] audition, the famous final addition, but I did a preliminary first-round showcase,” Aubrey explained. She also dished on being an intern with the set designers on the show. “They [the set designers] loved me because I did not care about set design at all,” she explained. “They wanted an intern who had no interest in learning what they did, because they were moody bastards. And you know that’s true.”