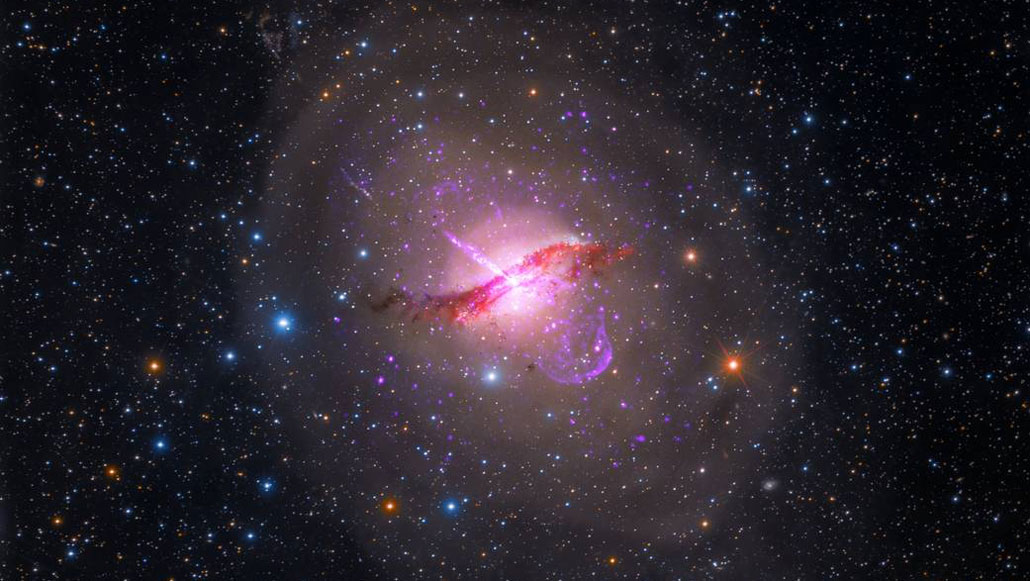 The Event Horizon Telescope is expanding its portfolio of black hole images.

In 2019, the telescope unveiled the first image of a black hole, revealing the supermassive beast 55 light-years from Earth at the center of galaxy M87 (SN: 4/10/19). That lopsided orange ring showed the shadow of the black hole on its glowing accretion disk of infalling material. Since then, observations from the Event Horizon Telescope, or EHT, have yielded more detailed views of M87’s black hole (SN: 9/23/20). Now, EHT data have revealed new details of the supermassive black hole at the heart of a galaxy near our own, called Centaurus A.

Rather than zooming in close enough to see the black hole’s shadow, the new picture offers the clearest view yet of the powerful plasma jets erupting from the black hole. This perspective gives insight into how supermassive black holes blast such plasma jets into space, researchers report online July 19 in Nature Astronomy.

“It’s a fairly impressive feat,” says radio astronomer Craig Walker of capturing the new high-resolution image. “These [jets] are some of the most powerful things in the universe,” says Walker, of the National Radio Astronomy Observatory in Socorro, N.M., who was not involved in the work. Because such superfast plasma streams are thought to influence how galaxies grow and evolve, astronomers are keen to understand how the jets form (SN: 3/29/19).

Researchers pointed the global network of radio dishes that make up the EHT at Centaurus A for six hours in April 2017, during the same observing run that delivered the first picture of a black hole (SN: 4/10/19). About 12 million light-years from Earth, Centaurus A is one of the brightest galaxies in the sky and is known for the huge jets expelled by its central black hole.

“They extend to pretty much the entire scale of the galaxy,” says Michael Janssen, a radio astronomer at the Max Planck Institute for Radio Astronomy in Bonn, Germany. “If we were to see radio light [with our eyes], and we were to look at the night sky, then we would see these jets of Centaurus A as a structure that is 16 times bigger than the full moon.”

Using the EHT, Janssen and colleagues homed in on the base of those jets, which gush out from either side of the black hole’s accretion disk. The new image is 16 times as sharp as previous observations of the jets, probing details less than one light-day across — about four times the distance from the sun to Pluto. One of the most striking features that the image reveals is that only the outer edges of the jets seem to glow.

“That’s still a puzzle,” Janssen says. One possibility is that the jets are rotating, which might cause material in some regions of the jets to emit light toward Earth, while others don’t. Or the jets could be hollow, Janssen says.

Recent observations of a few other galaxies have hinted that the jets of supermassive black holes are brighter around the edges, says Denise Gabuzda, an astrophysicist at University College Cork in Ireland, who wasn’t involved in the work. “But it’s been hard to know whether it was a common feature, or whether it was something quirky about the few that had been observed.”

The new view of Centaurus A’s black hole provides evidence that this edge-brightening is common, Gabuzda says. “It’s fairly rare to be able to detect the jets coming out in both directions, but in the images of Centaurus A … you can clearly see that both of them are brighter at the edges.”

The next step will be to compare the EHT image of Centaurus A with computer simulations based on Einstein’s general theory of relativity, to test how well relativity holds up in this extreme environment, Janssen says. Examining the polarization, or orientation, of the light waves emanating from Centaurus A’s jets could also reveal the structure of their magnetic fields — just as polarization revealed the magnetism around M87’s black hole (SN: 3/24/21).

How do scientists calculate the age of a star?

What experts know about COVID-19 boosters for the immunocompromised

The coronavirus cuts cells’ hairlike cilia, which may help it invade the lungs

A century of astronomy revealed Earth’s place in the universe

How intricate Venus’s-flower-baskets manipulate the flow of seawater

This butterfly is the first U.S. insect known to go extinct because of people

Climate change may be leading to overcounts of endangered bonobos