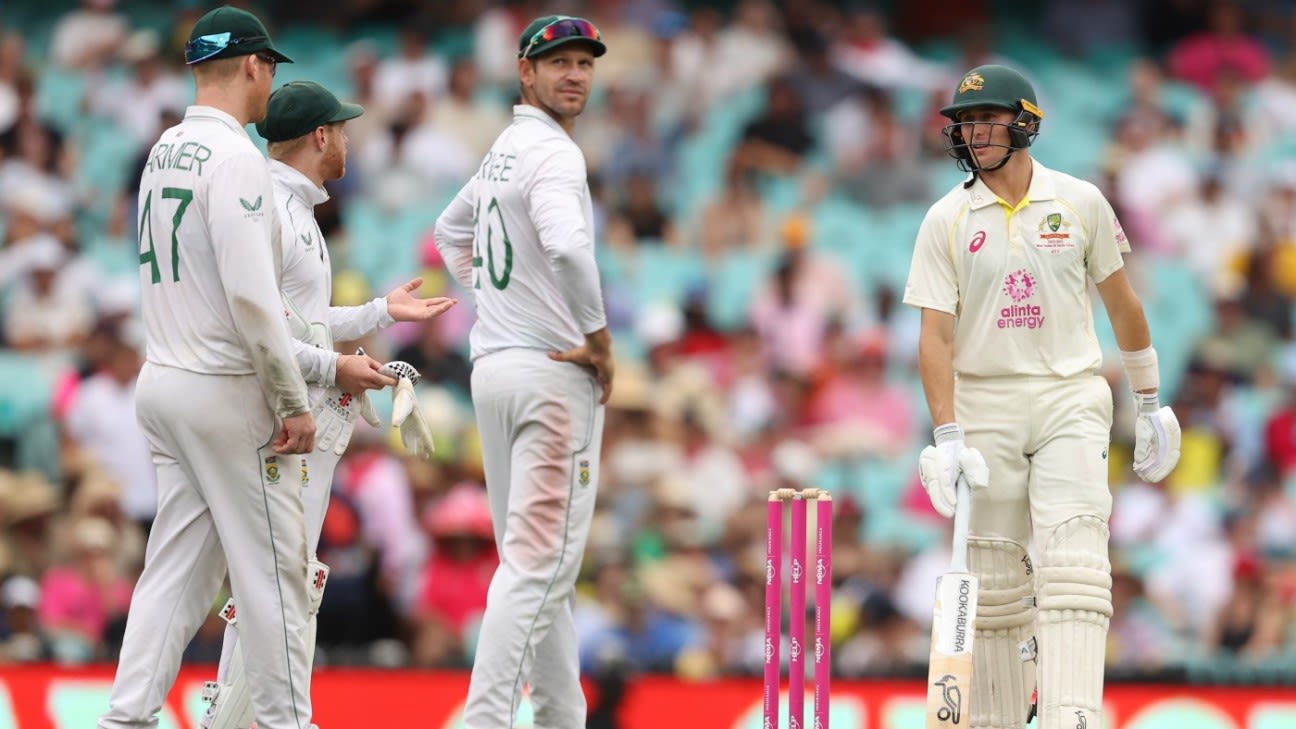 South Africa were adamant that Simon Harmer‘s catch in the slips off Marnus Labuschagne, which was ruled not out by the third umpire, had been cleanly taken. But they could at least sleep a little easier knowing it had not been hugely costly thanks to the persistence of Anrich Nortje.

On 70, Labuschagne edged Marco Jansen low to Harmer at slip with the catch immediately being claimed. However, Labuschagne stood his ground and the decision went upstairs. After much rocking, rolling, and zooming, the TV umpire, Richard Kettleborough, ruled it hadn’t gone in cleanly.

“All of us thought it was out,” Nortje said. “Simon was convinced it was straight. Think if you look at the front-on angles, to us it looks like the fingers are underneath it. Unfortunately, we didn’t get that one, think it would have been a big one at that stage. We are convinced it was out.”

Labuschagne was not able to build on the reprieve, edging a lifting delivery from Nortje from what became the final ball of the day, but believed that the replays showed some part of the ball had to be touching the ground.

“Regardless of whether it’s caught or not, with the technology, there’s so many ones that people are adamant they have caught – and Simon said ‘I’ve caught that’ – and in the old rules of catching it, because you felt like your fingers are under it, absolutely, but with the new footage those are so scrutinised because you see so many angles,” Labuschagne said. “Especially that side-on angle, makes it look really bad, then the front-on angle actually looks pretty good.

“If there’s no TV then I’m walking, that’s just how the game works. But with the amount of slow-motion footage of the ball, you see his fingers push and split open, according to the technicalities some of the ball is touching the grass, regardless of whether his fingers are under it or not.”

He also supported the move to make the on-field soft signal, which in this case was out, largely redundant. It now only comes into play if the TV replay fails or is unavailable, rather than being a ruling that the third umpire has to find conclusive evidence to overturn.

“Richard [Kettleborough] really had a tough job with that one, particularly because the camber of the ground slopes away. It’s a tough call… but I can understand why South Africa might feel a bit hard done by there”

“The soft signal on-field doesn’t matter anymore, whereas before it did,” Labuschagne said. “If the umpire gave it out, then he would have [to find] conclusive evidence to overturn it, but now, Kets [Kettleborough] was up there to make the decision with no interference. That’s the best way to do it, because it’s so hard to tell if you are at square leg whether that’s carried or not. In the past, the soft signal has had so much weight.”

Former ICC umpire Simon Taufel clarified the tweak to the soft-signal protocol but conceded South Africa could consider themselves unlucky in this instance.

“The ICC did tweak its third-umpire protocols in this area last year, where the soft signal in this particular case with a fair catch would carry less weight, only if the TV replays were inconclusive or poor, or non-existent,” he said on Channel Seven. “So Richard really had a tough job with that one, particularly because the camber of the ground slopes away. Obviously, Richard felt that the ball hit the ground before getting into the hands. It’s a tough call… but I can understand why South Africa might feel a bit hard done by there.”

In the end, Labuschagne’s thin edge from a rising delivery ended a testing string of deliveries from Nortje and left him cursing that he could not see through one more ball.

“It always makes you very angry as a batter when you get out and everyone walks with you off the field,” Labuschagne said. “Really makes you think about that specific ball, but at the end of the day he bowled a really good set, four or five balls in the same spot, and then that one just kicked.”