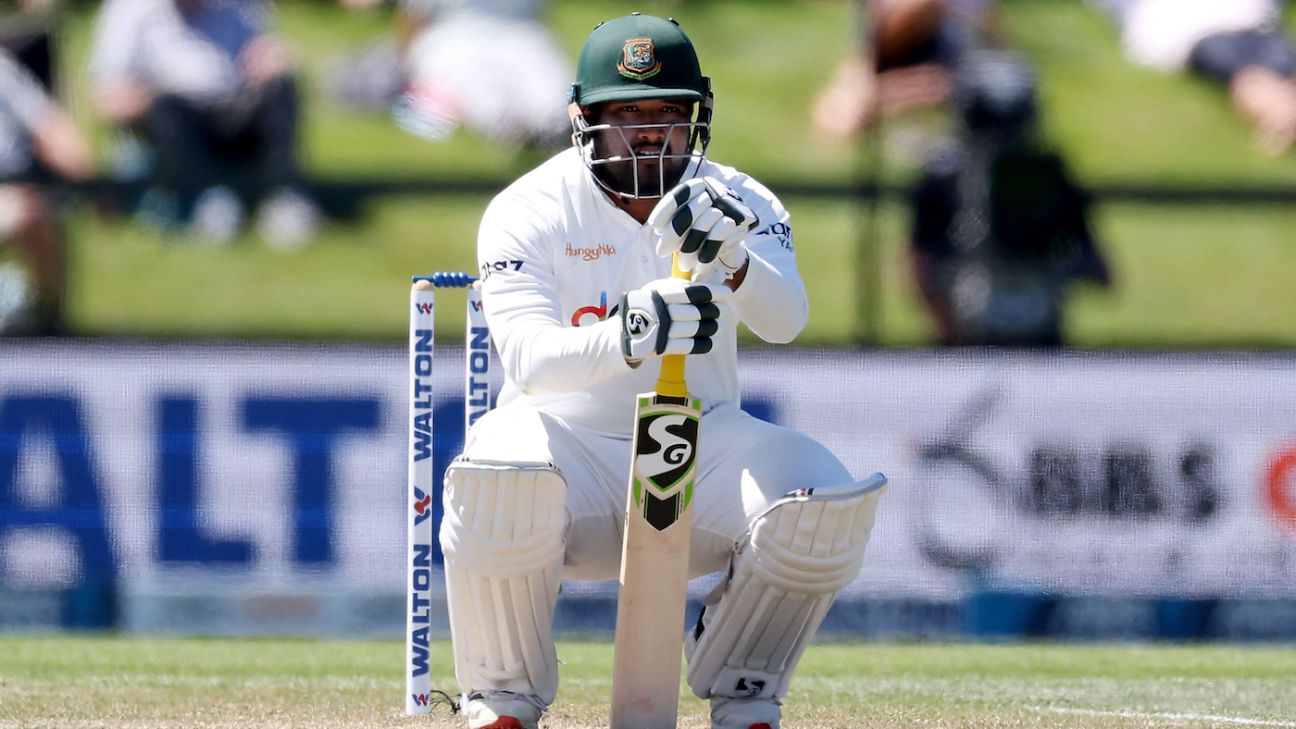 “I think we can leave a few more balls outside off stump to make them bowl straighter at us.”

Bangladesh have to be “decisive” in whatever they do in Christchurch now, according to batting coach Ashwell Prince. The visitors were bowled out for 126, responding to New Zealand’s 521 for 6 declared, a display which didn’t reflect any of their trust in leaving or even playing the swinging ball.
The top five all got out in single-figures, a stark contrast to the first eight batters playing at least 50 deliveries in the first Test last week. They went on to bat for 173 overs in Mount Maunganui, as opposed to a mere 41.2 overs on the second day at Hagley Oval.
Prince said that Yasir Ali, who reached his maiden Test fifty, top scoring with 55 in this innings, showed that he was confident in what he wanted to do.

“Yasir was solid in defence and decisive in attack,” Prince said. “I think it is that type of a pitch. You have to leave the ball with confidence. You have to be decisive playing a defensive or an attacking shot. The keyword is decisive with whatever option you will be taking.”

Yasir and Nurul Hasan added 60 runs for the sixth wicket. Nurul struck the ball well during his 41, but their effort fell way short of bailing out Bangladesh from a difficult situation.

“At tea time, we identified the pitch was quite good for batting,” Prince said. “There was value for shots off the surface. The outfield was nice. If we could hang in a little bit, we could get a partnership going. The movement happened a bit quicker off the surface today. I was comfortable thinking some of the balls would go past the outside edge. It is normal for these conditions.

“Sohan [Nurul] played positively. Came forward nicely at the bowlers. He got his front foot out of the pitch of the ball. He got his weight over the ball. Yasir, only playing his third Test, was unlucky caught down the leg-side at the Mount. He applied himself well in that game, and today as well.”

Prince alluded to how New Zealand batted on the first day, led by Tom Latham, who ended up scoring 252.

“We learned from the Kiwis that they left a lot more balls outside the off stump. It comes a little bit more naturally for the New Zealand batters. They play on bouncy surfaces. Our guys play a lot more balls. I thought we left really well and played well off the back foot at the Mount.

“I thought we could have left a few more balls today. Hopefully tomorrow we can get off to a good start. I think we can leave a few more balls outside off stump to make them bowl straighter at us.”

Prince said that they knew New Zealand would hit back after the defeat in the first Test, and that as soon as they did, it became difficult for Bangladesh. He said that it was similar to how Bangladesh ran away with the game having batted big in the first innings in Mount Maunganui.

“Of course we are disappointed [with the top five in the first innings]. It was a massive effort last week. We played 173 overs against a quality bowling attack. I think it is fair to say that we expected NZ to come back with a lot more urgency in this game. If you compare the two games, you can see that it is really difficult to fight your way back, even if you are the No. 1 team.

“Last week, we managed to get ourselves ahead of the game. In this game so far, they started really well yesterday, continued it this morning. They also started well with the ball. They made it tough for us to get back into the game. We have to live to fight another day.”