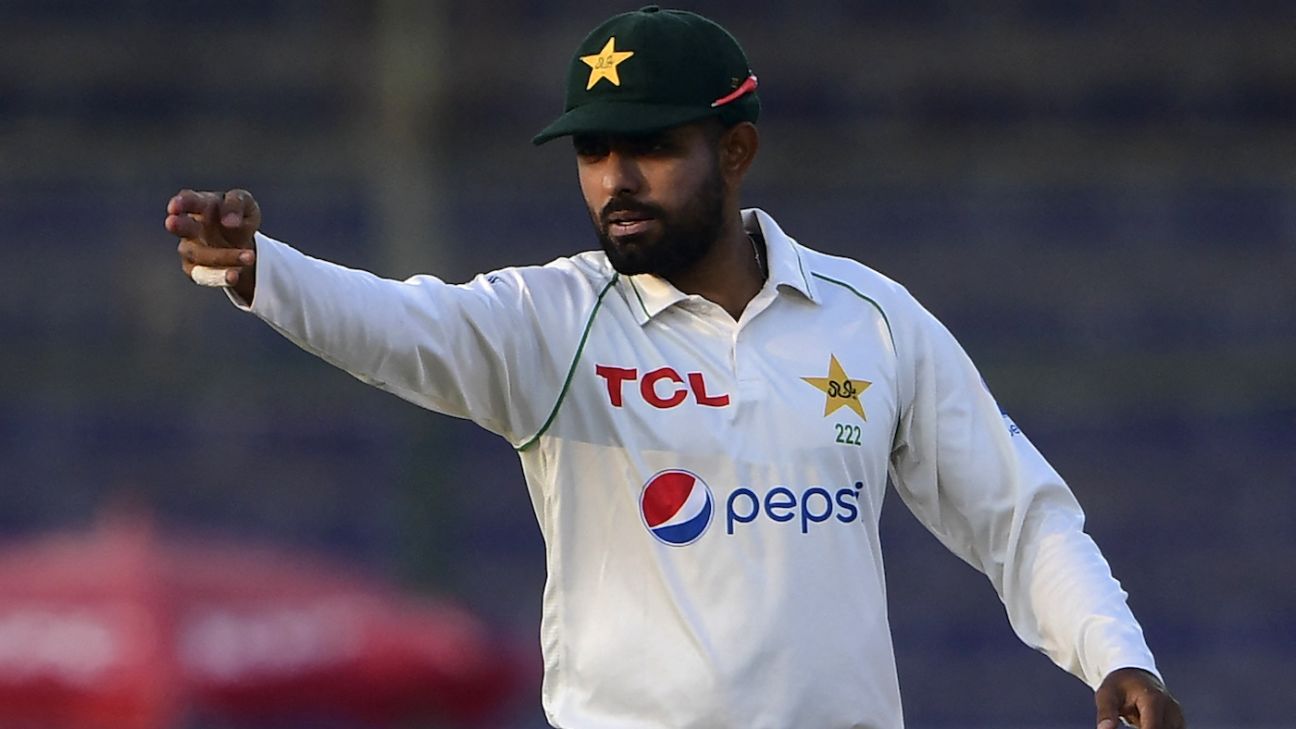 The thrill of securing a draw in the dark may provide its own endorphin rush, but Babar Azam was lucid enough to see the bigger picture. The Pakistan captain has acknowledged his side had not met expectations during the home Test season, which came to a close with a 0-0 draw in this second Test.

“The Test season hasn’t gone according to expectations,” Babar said at the post-match press conference. “It’s not an excuse but some of our players were unfit which disturbed our combination. Of course there’s talk about the pitches, but conditions are different at every venue. We give our input on pitches, but you get the pitches you get, and after that you have to execute your plans. You can’t just complain about losing a match because of pitches. We prepared them according to our plans, but results didn’t go our way.”

After a 3-0 defeat to England last month, Pakistan found themselves on the back foot for large parts of both Test matches against New Zealand. On the final day of each match, the home side was happier to shake on a draw. In the first Test, New Zealand needed 77 runs with nine wickets in hand when light intervened, whereas today, the visitors needed just one wicket when the umpires whipped off the bails. Extend it further back to the series against Australia, and Pakistan have now gone eight Test matches at home without victory in a run that extends back two years.
It might easily have been three successive home series defeats when Sarfaraz Ahmed was squeezed down leg side in the 87th over. It brought out Pakistan’s No. 11 Abrar Ahmed to survive a nerve-shredding final 15 minutes alongside Naseem Shah, with the pair seeing out 21 balls before it became too dark.

“It’s difficult to play the new ball when the fielders are up but Naseem and Abrar held their nerve at the death,” Babar said. “The way Saifi [Sarfaraz] came back and got us out of a hole was amazing, because his partnership with [Saud] Shakeel brought us back into the match. He’s come back after four years and had a dream comeback, after waiting all those years. It was his belief that kept him going.”

“We’d planned to go after it at tea, and you have to take risks for that. At the time, we needed 4.5, for which you need to take chances, which can lead to dismissals. If we’d got out, you’d be asking very different questions”

At the start of that session, though, it was tantalisingly poised. Sarfaraz and Saud Shakeel had added 99 for the sixth-wicket stand. New Zealand’s fast bowlers appeared to have run out of ideas, but the scoring rate for the stand stood at just under 2.25, which meant Pakistan still required 140 runs in a final session where all four results seemed possible.

Babar said Pakistan were eyeing up the win at that point. “We’d planned to go after it at tea, and you have to take risks for that. At the time, we needed 4.5 [an over], for which you need to take chances, which can lead to dismissals. If we’d got out, you’d be asking very different questions. When New Zealand saw we were going for it, they opened the field up. We still took chances but then it becomes a slightly different situation.

Sarfaraz, who had crossed three figures by this point, was now accompanied by Agha Salman; his strike rate was higher than any other Pakistan batter at that point. He had struck four boundaries and New Zealand were beginning to look a touch ragged in the field, a couple of misfields and the odd set of byes whittling down the target even further. However, once Matt Henry got the old ball to swing back in and beat a wild swing from Salman, the outlook changed once more.

“Agha got out and then the tail came in; after that we wanted to take the game deep,” Babar said. “Saifi was in there so he was better at assessing where the game could go. When a wicket falls, building a new partnership is difficult. After our set batters got out, we knew the tail was coming, and we’ve lost our last few wickets quickly in the past.”

In the end, though, pragmatism won even though Pakistan were desperate not to end the home season winless. Babar admitted the way forward from here could take time, he pointed out this Test side was “very good” until very recently, when injuries derailed them at the start of this season.

It prompted him to emphasise the value of fitness in an age of relentless cricket. “We’re trying to learn from our mistakes,” Babar said. “Everyone has their own opinions but we have to focus on our performance. Forming a team takes time. Our Test side was very good, but suddenly there were a few injuries, which disturbed our players and altered the form of our side. We’ve tried to do our best but it just hasn’t worked out. We’ll look at whether to have Test specialist players in future. There’s so much cricket if you want to play all three formats you’ll have to be ultra-fit.”