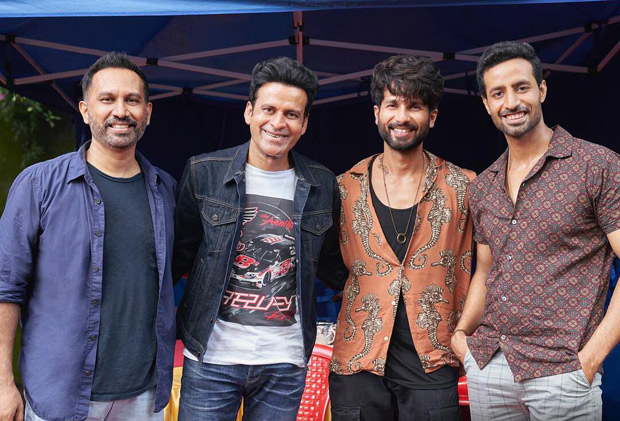 Filmmakers Raj Nidimoru and Krishna DK are currently riding high on success after their web series The Family Man 2. The duo is also heading towards the third season of the espionage drama.  Meanwhile, they both have also signed up actor Shahid Kapoor for an upcoming untitled web show.

Recently, the duo also treated their fans with a delightful watch as they managed to bring Shahid Kapoor and Manoj Bajpayee in one frame. Bhuvan Arora is also present in the photo. Sharing the photo, the duo captioned it as, “And then this happened ????.”

Collaborating with Raj and DK, Shahid Kapoor will also mark his digital debut. Some time back while talking to a tabloid, Shahid expressed his excitement for digital debut as well as working with Raj & DK. Shahid said that he was always keen to collaborate with Raj and DK for a long time and his favourite Indian show on Amazon Prime Video is The Family Man. He also said that he couldn’t think of anyone better for his digital debut than them and feels privilege in working with them. He also loved the story idea.

Also Read: EXCLUSIVE: Raj Nidimoru on The Family Man 3 speculations – “We are happy to get into S3 very soon”

“Pappa se tujhko milaaoonga”, teases Eijaz Khan as he posts a picture with his father and girlfriend Pavitra Punia on Instagram : Bollywood News...

Will Lara Trump Be the Next Trump on a Ballot?