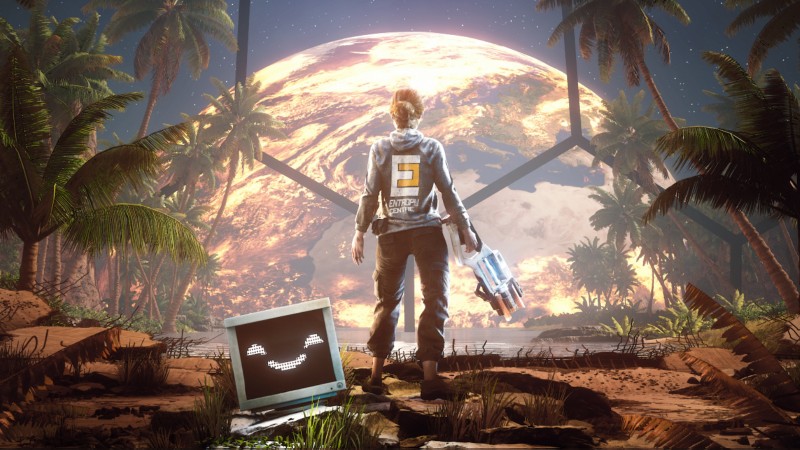 I don’t envy the developers of puzzle games. They have to create puzzles formidable enough to be challenging and exciting, but not so much that the player feels more burdened than empowered. The best walk that line almost perfectly, and The Entropy Centre is chock full of them. But The Entropy Centre is more than its brain teasers, and it’s that “more” where the game hits its stumbling blocks. Despite that, its core design is unlike anything I’ve ever played, and genre enthusiasts will find that this game bends their brains in new ways worth experiencing. I only wish the game’s pacing and polish lived up to the thrills its 60-plus puzzles gave me.

Since The Entropy Centre’s reveal earlier this year, developer Stubby Games has been quite clear in its inspirations. This sci-fi game unfolds in an abandoned brutalist facility where you solve puzzles color coded primarily with orange and blue. Oh, and there’s an A.I. with a bubbly personality and a dry, deadpan sense of humor. Naturally, my mind immediately compares it to Valve’s Portal series, and on the gameplay front, The Entropy Centre succeeds.

Aria awakens in an abandoned moon facility called The Entropy Centre, left alone to discover that the Earth will experience a cataclysmic event any minute. It happens and because of the Earth’s destruction, said space facility is now at risk of blowing up, and Aria must stop it. To do this, she must solve puzzles with her A.I.-powered gun, Astra, to charge the station with entropy so that its time-reversing device can stop Earth’s apocalyptic calamity from ever happening in the first place. This premise immediately grabbed my attention, and I loved reading emails on the centre’s various computers to learn more about other apocalyptic events entropy had prevented.

The story ties that premise, Aria and Astra’s place in it, and these in-world emails together nicely, warning that without forward thinking, no outside force can help the Earth survive; if we, the human race, don’t get our act together, our world will die. I just wished the game’s pacing didn’t dampen any climactic feeling I might have felt otherwise. Multiple times I thought I was reaching the game’s big “a-ha” moment, only for it to throw me through another gauntlet of challenges. And while I loved trying to solve each puzzle as an isolated instance, I didn’t love how often they felt like tiresome roadblocks during the game’s third act. The entire experience feels bloated as a result, and I felt exhausted more than anything else when the credits rolled. Still, though, that bloated third act is offset by two-thirds before it that are intriguing and engaging in a way the best games in this genre are.

The game’s dozens of puzzles all revolve around special cubes. You place these cubes on pads to power up elevators or open gates. Some cubes don’t do anything on their own. Others act as jump pads to help you reach high-up platforms or as bridges to help you cross gaps. The Entropy Centre continues to dole out new types of cubes throughout the 15-hour experience, and I met each with enthusiasm to see how it might rearrange my mind’s puzzle-solving toolbox. The cubes alone won’t reveal your solution, though – you need Astra. This gun can turn back time on an individual object by 38.1 seconds and as a result, every obstacle becomes one where you must first envision how a sequence of events must play out and then reverse it in your head so that you know exactly how to set it up. To put it simply, solving a puzzle in The Entropy Centre requires that you determine where you need to end up and work backwards to find the beginning.

By the end, I was solving puzzles using multiple cubes, all of which did different things, and feeling like a genius as I watched various time-reversing paths place everything exactly where I needed them. It hurt my brain at first – a lot – but I quickly learned the rules by which The Entropy Centre worked, and I was delighted to find an entirely new type of puzzle as a result.

Occasionally, I’d lose five minutes of progress because a cube would disappear into a wall, causing me to restart the entire sequence. Nothing was more frustrating than watching a cube glitch into the wall before disappearing entirely. The game also crashed entirely on me a few times. Ultimately, though, the satisfaction that solving each puzzle gave me outweighed the frustrations I experienced.

With The Entropy Centre behind me, I’m fascinated by what Stubby Games accomplished with its debut. It’s full of excellent puzzles, but the stuff around them, like bugs and narrative pacing, stop the entire package from coming together in an equally impressive way. Despite the exhaustion I felt as the credits rolled, I’m stoked The Entropy Centre exists. It brings something unique and new to the genre, and I hope Stubby Games continues to iterate on that in a sequel, spin-off, or spiritual successor. It’s not every day a game shows me something I’ve never seen before that it also happens to nail, and what The Entropy Centre does well is worth pushing through its long narrative to ensure you see every trick up its sleeve.

SpongeBob SquarePants: The Cosmic Shake Review – Not Quite A Sweet Victory – Game Informer