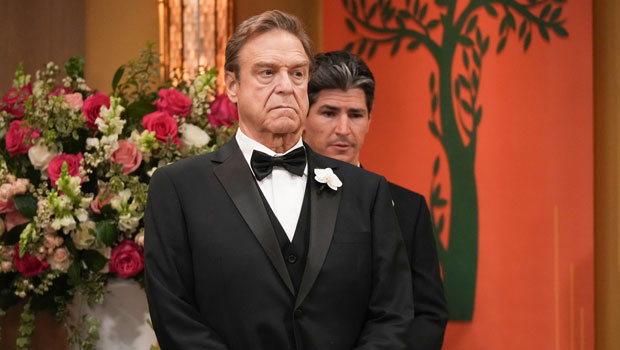 They’re hitched! HL spoke EXCLUSIVELY with ‘The Conners’ EPs about Dan and Louise’s wedding, what their married life will look like, and that moment between Darlene and Ben.

Dan and Louise got married on the October 13 episode of The Conners — in the middle of a tornado with Jackie officiating. The buildup to the wedding got a little hectic and it was a possibility the wedding could get called off, but Dan and Louise did end up tying the knot. HollywoodLife spoke EXCLUSIVELY with The Conners executive producers Bruce Helford and Dave Caplan about Louise’s cold feet just before the wedding.

“We always knew that we were going to get married,” Bruce said. “Realistically, for the character, you’ve got a woman who has spent her entire life single. She’s a rock and roller. She doesn’t have kids and doesn’t seem to want that lifestyle, so we had to address the reality of what she feels when the whole thing became overwhelming to her. She got more than she could plan for with all it takes to put together a wedding and everything with the weather and everything else, but we always wanted them to get together.”

Dave added, “I will say that for us it was an interesting character revelation because Louise is so grounded and so together as a character. I think anybody that’s ever gone through a wedding knows that even the most grounded person can come apart at the seams trying to put a wedding together. We thought that was a realistic thing and what it showed was how much Dan was a traditionalist and really wants to be married. She said, ‘Let’s live together.’ And he said as he was walking down the aisle, ‘I thought about that. I said no, I really wanted to be your husband.’ And that’s because of Dan’s kind of traditionalist values, and so we thought what happened with Louise was kind of interesting show a side of Dan, too.”

Jackie came through with the save as everyone bolted from the church during the tornado. Just before they ran to the cellar, Jackie married Dan and Louise. “We thought it would be really interesting if once again the Conner family came through for the Conner family when the chips were down,” Dave continued. “That’s kind of the show in a nutshell. And in the middle of a storm and everybody’s scared for their lives, family comes to the rescue. That was really fun.”

Now that they’re married, things will change inside the Conner household. “I don’t envy Louise,” Bruce admitted. “She’s moving into a house where literally every level of the house is occupied by family. There’s no privacy, and now she’s going to be moving in full time. So there are lots of complications. How does Louise make her space as well? In that last dance, the last thing she says is, ‘They’re not going to live here forever, right?’ That’s a constant challenge for Dan and for the family. It’s going to be a complicated marriage. They love each other. They’ll have to deal with it as piece comes to piece, but even simple things that are going to come in very, very shortly. Does she have furniture she wants to change or bring in of her own? That’s very hard on a family that’s so tight and so used to the tradition of the house. My kids always say to me, ‘Don’t change anything. I want it to be like what it was when I was a kid.’ It’s like, well, there are holes in the furniture. It’s easy to say that you’re starting a new life with somebody. But what happens if you’re of a certain age and you already have lives that are pretty well established? How do you mend them together? I think that’s going to be a theme that we’re going to be exploring in future episodes.”

Before the wedding, Becky was devastated when she accidentally took a sip of champagne. Mike comforted her in the bathroom as she cried over breaking her sobriety. Bruce explained that Becky’s response to taking a sip of alcohol was inspired by his own life.

“My wife and I went to a nightclub, and she’s unabashedly like 25 years sober, longer now, and we were there and she ordered a Diet Coke and they brought her a rum and coke,” Bruce explained. “She sipped it and absolutely melted down. She was like, ‘You don’t understand. This is breaking my sobriety. It’s a drink in my system.’ She spends two hours on the phone with her sponsor. We thought this would be a realistic response for Becky when she accidentally takes a drink. We’re surrounded by vices you may be subject to, so it will come up from time to time for sure.”

In one of the final scenes of the episode, there was a moment of hope between Ben and Darlene. Ben agreed to stay and hang out with Mark for movie night. “Thanks for caring,” Darlene said. Ben replied, “It’s hard to stop, even if you want to.” So, what does this mean for Ben and Darlene?

“What it means is that it’s messy,” Dave told HollywoodLife. “You don’t stop having feelings for each other just because things didn’t work out. And what really complicates it is that Ben is part of the Conners’ lives. He has relationships with all of them now. He has a relationship with Mark. He works with Dan. He and Becky are friendly and tight, so Darlene is faced with having to move on from a heartbreak when the person that broke your heart is in the house all the time. We like messiness, so this is going to be good and messy.”

Darlene is also going to be dealing with Harris’ much older boyfriend, Aldo. “Darlene does not like this relationship,” Bruce said. “That has legs to go for a bit here because they’re butting heads about it. It does bring some major developments into the Conner family as a result.”

This will also coincide with Darlene’s journey to find “some more peace in the wake of the Ben breakup and figure out how to make relationships work,” Dave noted. “She does not like that Harris and Aldo are together, but she doesn’t want to have it destroy her relationship with Harris. So at a time when you’re supposed to be concentrating on peace, she’s feeling tumult, and she’s got to deal with it. It’s not only interesting for Harris and Aldo, but it’s pretty interesting for Darlene.” The Conners airs Wednesdays at 9 p.m. on ABC.