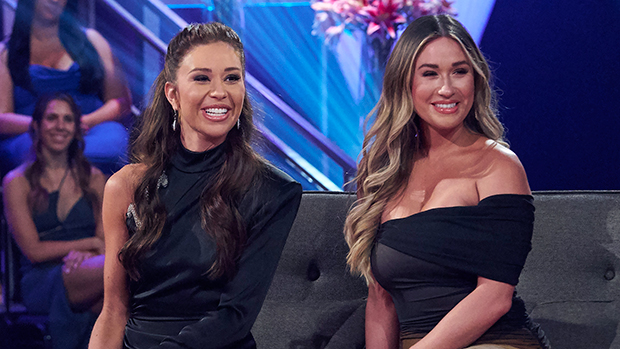 Part two of the season 19 finale of The Bachelorette aired on Sept. 20, with footage from Gabby Windey and Rachel Recchia’s final days in Mexico back in May, as well as live, in-studio updates about where they’re at now. The episode begins with Gabby and Rachel each having just one guy left — Erich Schwer and Tino Franco, respectively.

The show kicks off in-studio, with host Jesse Palmer addressing some scandals that have gone public involving Erich and Jesse in recent weeks. He references Tino’s “indiscretions”, as well as “damning messages” that Erich sent an ex just days before leaving to film in March. However, a lot has to go down before those can be addressed. The previously-taped episode picks up with a conversation between Gabby and Erich, where he begins questioning whether or not he’s ready to propose after just a few weeks, even though he knows he’s in love with Gabby.

Knowing she wants a proposal, Gabby is frustrated with the conversation, but returns to hash things out. Erich insists that he wants the relationship to work and urges Gabby to keep trying with him. They end the night on good terms, and Gabby is certain that she loves Erich and wants to be with him.

Meanwhile, Rachel tells Tino that he’s her only man left after her breakup from Aven Jones. Tino confirms that he was still on the same page as Rachel in terms of an engagement and future together. Rachel is more confident than ever in her relationship with Tino at this point.

Rachel heads to the final rose ceremony, ready to give Tino her final rose. Tino proposes with a romantic speech, and Rachel accepts his emerald cut sparkler. She calls the moment the “happiest moment” of her life as they celebrate their engagement in Mexico. Back in real time, though, things have fallen apart for Rachel and Tino. She tells Jesse on After the Final Rose that they had broken up in the months since filming after she found out he cheated on her.

In footage filmed a few weeks earlier, Tino admits to Rachel that he kissed another girl. Rachel had admitted that she and Tino were going through a rough patch once The Bachelorette premiered, but they never broke up or ended the engagement. Obviously, she’s devastated to learn about his indiscretion. The two have an intense argument, and Tino begs Rachel to work things out. However, she’s “done,” and gives him the ring back. Back in-studio, Rachel says she has love “for” Tino, but is absolutely no longer in love with him.

Then, she and Tino come face-to-face for the first time since Rachel broke off the engagement. The conversation gets nowhere, and Rachel ends it by slamming Tino for doing something “inexcusable.” However, she’s finally able to smile again when one of her former contestants, Aven Jones, returns to the stage and asks her if she wants to come with him. She gladly accepts and leaves the show with Aven, hopefully to explore their relationship again.

Things then shift back to Mexico for the ending of Gabby’s journey. Erich proposes with an oval-shaped ring, and they happily celebrate their engagement. However, in-studio, Jesse reveals that “not everything has been rosy” between the two in the months since. Erich comes onstage and the two are still happily engaged, but they have a lot to discuss.

Erich speaks for the first time about his text messages to an ex that were leaked this week. The texts showed Erich saying that he was only going on The Bachelorette for his career. He also said that the show wasn’t “real” in another message. Erich took accountability for the messages, and explains that his feelings about the show changed as soon as he met Gabby. He also admits that he used the show as a way to get out of the relationship with his ex, who he didn’t see a future with. Gabby shows her support for Erich, and they confirm they’re still together.

Keep refreshing because we’ll be updating our live blog with everything that goes down in the episode all night long!