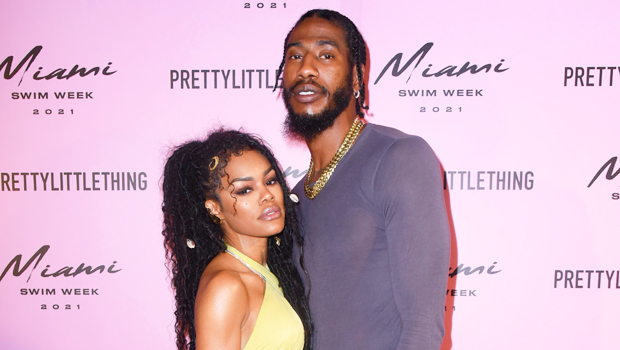 Teyana Taylor shared an enthusiastic congratulatory message to her husband Iman Shumpert and his partner Daniella Karagach, moments after they won season 30 of ‘Dancing With the Stars.’

Teyana Taylor, 30, is “proud” of her husband Iman Shumpert, 31, after it was declared he and professional dancing partner Daniella Karagach, 28, won the 30th season of Dancing With the Stars. The singer gave a big shout-out to the NBA star and his fellow mirrorball trophy winner in a sweet and loving post on Instagram, minutes after the news was announced on live television.

“THE LEVEL OF PROUD I AM IS TEWWWWWW MUCH TO EVEN PUT IN WORDS!!! WOW 🥺🥺🥺,” she wrote alongside several photos of Iman and Daniella in action on the dance floor. “congrats @imanshumpert @daniellakaragach i am proud but NOT shocked!!!! YALL GOT THAT! AS YOU SHOULD! WELL DESERVED!! Thank you for trusting one another, believing in one another, killing that sh*t every week & most importantly foot working that mutha f*cking mirror ball home!!!!!! PERIOD!”

Teyana’s message was just one of many DWTS fans shared when Iman made history and was crowned the winner. He beat out other talented contestants, including Amanda Kloots,  Jojo Siwa, and Cody Rigsby, and left behind an incredible set of dances to always look back on. Like in her recent post, his doting wife also gushed over him last month in an EXCLUSIVE interview with HollywoodLife.

“I’m not surprised because he’s always crashing my rehearsals!” Teyana joked, while referring to her own dancing skills, at Mohegan Sun’s anniversary party at TAO Mohegan Sun on October 23. “He’s been on about 15 tours with me. He’s my DJ, he’s my backup dancer behind closed doors, you know? I think something like this was only right to happen. I’m super excited.”