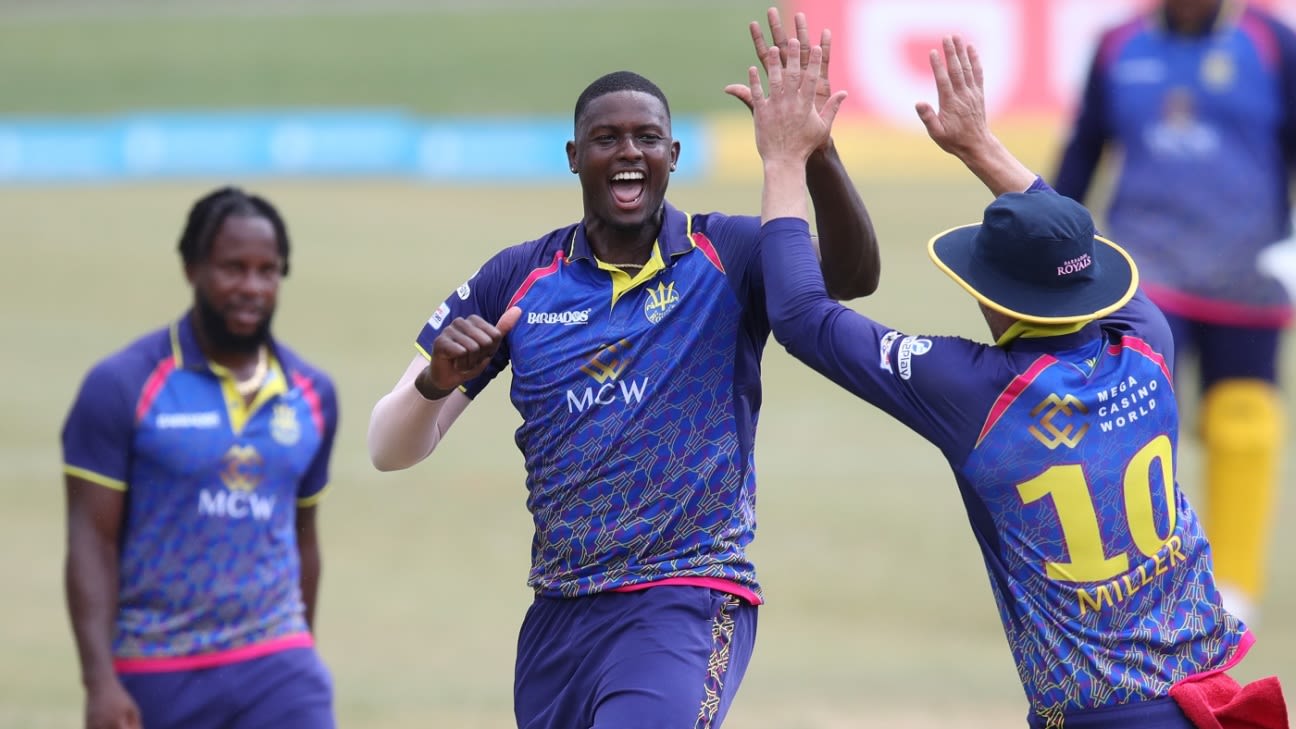 The likes of Kieron Pollard, Andre Russell, Sunil Narine, Nicholas Pooran and Dwayne Bravo will not feature in the CPL 2022 final. The star-studded Trinbago Knight Riders and St Kitts & Nevis Patriots, the CPL 2021 champions and the inaugural 6ixty winners, were the first two teams to be knocked out this year. Who woulda thunk it? Kyle Mayers‘ Barbados Royals and Rovman Powell‘s Jamaica Tallawahs are the only two teams standing now, with the title up for grabs.
Royals, who finished bottom last season, have bossed their way to the final, losing just two of the 11 games they have played so far. One of those losses was in an inconsequential match for them against Guyana Amazon Warriors and the other a rain-hit bout against Tallawahs, where Powell hit a timely six to put them ahead on the DLS rule. That Royals have dominated the tournament despite the absence of their regular captain David Miller and Quinton de Kock for the final leg in Guyana has made their run even more remarkable.
Royals’ franchise in the IPL (Rajasthan) fell at the final hurdle earlier this year but Barbados have the chance to do one better and perhaps set the foundation for a new CPL dynasty. Their opponents, Tallawahs, have had a less straightforward path to the championship game but it is worth noting that the last two times they had made it this far, they went and won the whole thing.
Powell’s men had set the early pace in 2022, along with Royals, with three wins in their first four matches, but slowed down in the Trinidad and Guyana legs of the tournament. Having eliminated Faf du Plessis’ St Lucia Kings and Shimron Hetmyer’s Amazon Warriors, Tallawahs have gathered pace once again.
Along the way, they have learnt to live without Russell, with Imad Wasim, Mohammad Nabi, and Powell himself doing the job for them with bat and ball. Tallawahs appeared top-heavy in the early half of the tournament, but the late arrival of Nabi has helped them balance out their XI. Although local opener Kennar Lewis is yet to fire like he can, Brandon King and Shamarh Brooks have showed attacking enterprise at the top.
Brooks is more of an ODI-style white-ball player but on Wednesday he rode his luck and powered his way to a 52-ball 109 not out – an innings that had Tallawahs assistant coach Curtly Ambrose quite animated. Having come into the squad as a replacement player in 2021, Brooks played a heroic knock in the second qualifier on Wednesday and showed that he could cut it in T20 cricket as well.
While Tallawahs’ batting hasn’t always clicked in unison, their bowling attack certainly has with Mohammad Amir and Imad taking 16 wickets each.

Obed McCoy had some issues with his rhythm and run-up in the early half of the season, but he still found ways to take wickets. He can hit speeds north of 140kph with the new ball and also cut the pace down at the death. Jason Holder is so impressed with McCoy that he believes the left-arm seamer could be “unstoppable” if he continues to develop his skills.

Imad Wasim is out of Pakistan’s side on fitness grounds but he continues to be an ever-present in Tallawahs’ line-up. Along with Powell, Wasim was part of the Tallawahs side that last won the title six years ago. Can he do it again, this time with a new-look team? The left-arm spinner has been his usual miserly self with the ball and can move up the order to deny oppositions favourable match-ups. His rollicking, unbroken 103-run stand with Brooks in the second qualifier is among the highlights of the season.

Royals will likely field an unchanged XI in the final although they have South African seam-bowling allrounder Corbin Bosch on the bench.

Amir suffered a groin injury during the second qualifier and bowled only 11 balls. If he doesn’t recover in time, Tallawahs might consider bringing in South African quick Migael Pretorius.

Providence is usually slow and conductive to spin, but this season it has aided strokeplay too, made plain by the fact that four of the top five totals in CPL 2022, have been made here, including the first 200.