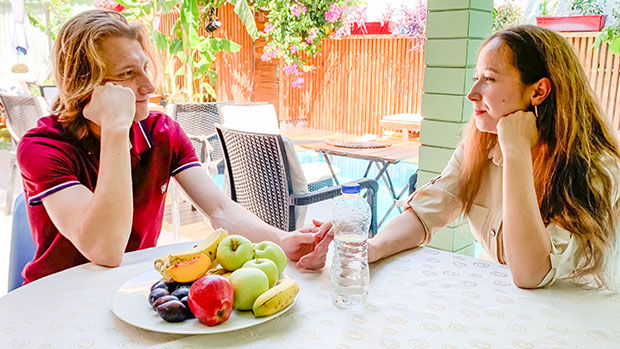 The reality show couple wed each other even after a tumultuous season of the show’s ‘The Other Way’ spin-off.

Love prevails after all! Steven Johnston and Alina got married after a long season of 90 Day Fiancé: The Other Way. The pair’s wedding was shown in a clip, which you can see here, from Sunday’s upcoming season finale, revealed on Entertainment Tonight on Tuesday November 23. The couple exchanged vows during an intimate ceremony in Turkey, a far cry from Alina’s home of Russia and Steven’s home of Salt Lake City, Utah.

The pair both looked so in love, while they exchanged vows at the ceremony. Alina stunned in a traditional red gown, while Steven wore a blue suit. Steven also brought the pair’s cats to the ceremony and received compliments from his wife for thinking to bring them. “It might seem like a silly and childish thing, but in reality, it’s a very manly gesture, it proves how well he knows me, and it was all very touching,” she said.

Steven and Alina faced many hurdles in their relationship this season, like Steven expecting his bride to stay chaste in respect to his Mormon religion, despite it being revealed that he also had a number of sexual relationships, via ScreenRant. The pair mentioned how they’d gone through a few hardships to eventually get to the alter. “There were moments where I thought our relationship wouldn’t lead to a wedding, but I’m sure that Steven really loves me, that his love is sincere. I’m certain I made the right decision,” Alina said after they tied the knot. “It feels so wonderful.”

Despite the road bumps, Steven proposed on a boat and sang a song specially for her, via InTouch Weekly. After the pair married, Steven referenced some of the struggles that the pair have gone through to get to their wedding day. “It’s been a crazy, crazy journey, moving to Turkey to be with her, and how much we had to sacrifice for each other,” he said. “I think that really speaks to how much we love each other, and that speaks louder than all of the arguments we’ve had along the way.”

While they’re now husband and wife, Steven also mentioned that the couple have more to do now that they’re married, as they plan to move to Alina’s home of Russia. “We’ve gone through a lot these past few months, and there’s still a lot cut out for us. We still have to apply for a visa for Russia and then baptize Alina once I get to Russia,” he said.