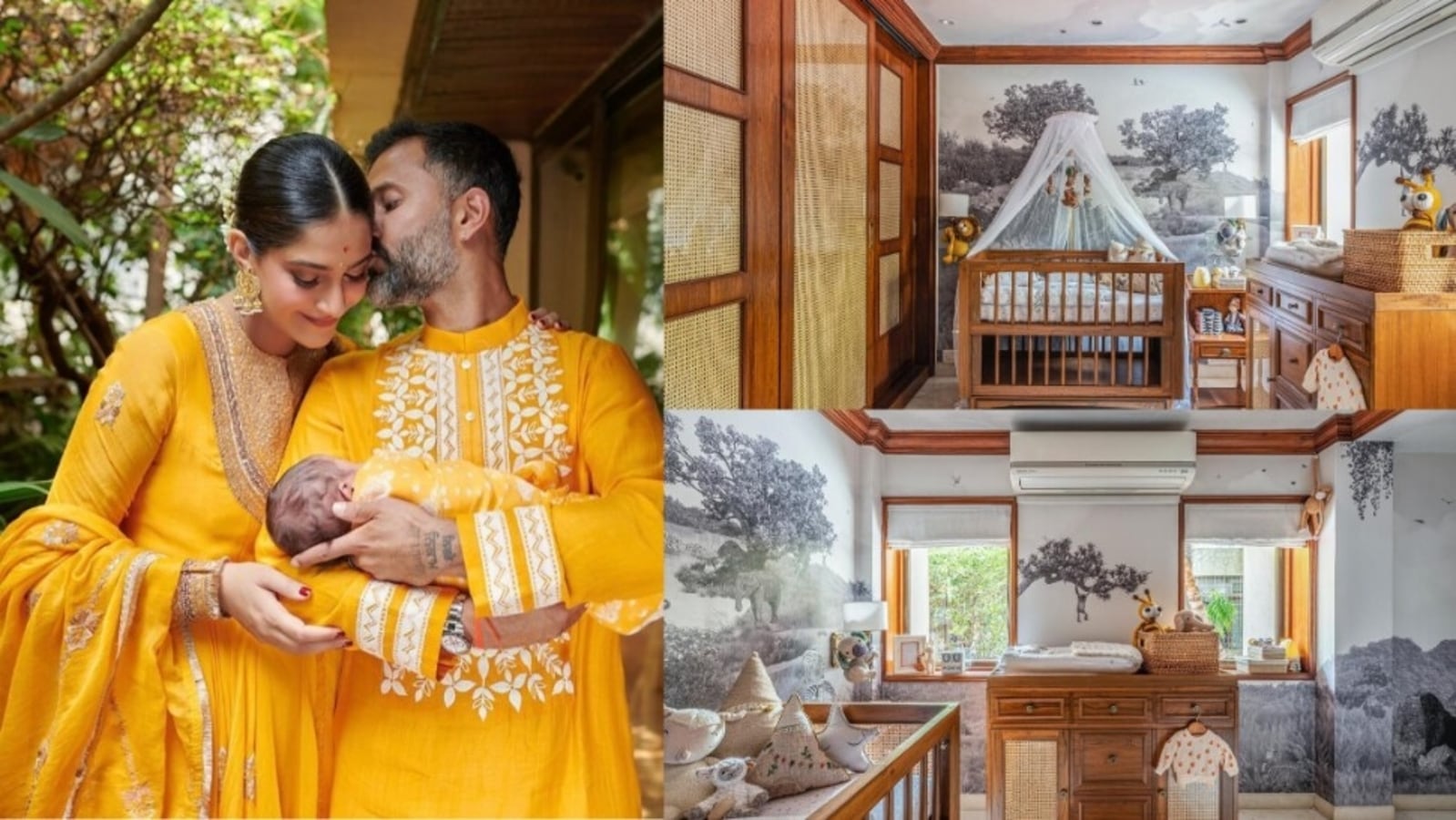 Actor Sonam Kapoor treated fans with inside photos of her son Vayu Kapoor Ahuja‘s nursery. Taking to Instagram on Sunday, Sonam Kapoor posted a string of pictures of the room at Sonam and husband Anand Ahuja’s Mumbai home. For her son’s nursery, Sonam chose a white and grey theme and added several sketches of nature across the room. She also opted for wooden furniture for the nursery. (Also Read | Sonam Kapoor poses with son Vayu as he rests on masi Rhea Kapoor’s lap, fans call it ‘pure love’)

In the pictures, a wooden cot stood at one end of the room. Several cushions and soft toys were kept on it. A wall-to-wall black and white sketch of nature was seen near the cot. A table and a wooden cupboard stood next to the cot. The room had a few large windows looking over a garden.

The floor was covered with white carpet with several toys on it. A chair stood near the wardrobe. A tiny red and white full-sleeved T-shirt was hung from a drawer in one of the photos. The room was also decorated with lamps, soft toys, and photo frames among other things to give it a cosy feel.

Sonam captioned the post, “This post is an appreciation post for the people who helped my mom and I put together everything for the arrival of my baby boy… I’ve known Dhwani of @wallpaperscissor since 2009 and she’s always been creative and precise, and I was very sure that anusha and wallpaper scissors would do a beautiful job of making my nursery in Bombay a thing of wonder and beauty and boy was I right!!.”

A part of her post read, “Thank you @organisewithease for setting up everything in the nursery and indulging my OCD. Most importantly I’d like to thank my mama @kapoor.sunita who moved heaven and earth for everything. I love you mama.” Reacting to the post, actor Shahid Kapoor’s wife Mira Rajput commented, “This is so lovely! @organisewithease is the best!!!” Sonam replied, “@mira.kapoor and so kind.” Lisa Haydon said, “Love it. Sooo beautiful” and Sonam responded with hug emojis.

Sonam and Anand Ahuja welcomed their first child, Vayu Kapoor Ahuja, on August 20 this year. A month later, the couple shared the first photo with the baby and announced his name.

Fans will see Sonam in the upcoming film Blind directed by Shome Makhija. The film stars Purab Kohli, Vinay Pathak, and Lillete Dubey in prominent roles. The film is expected to release later this year.