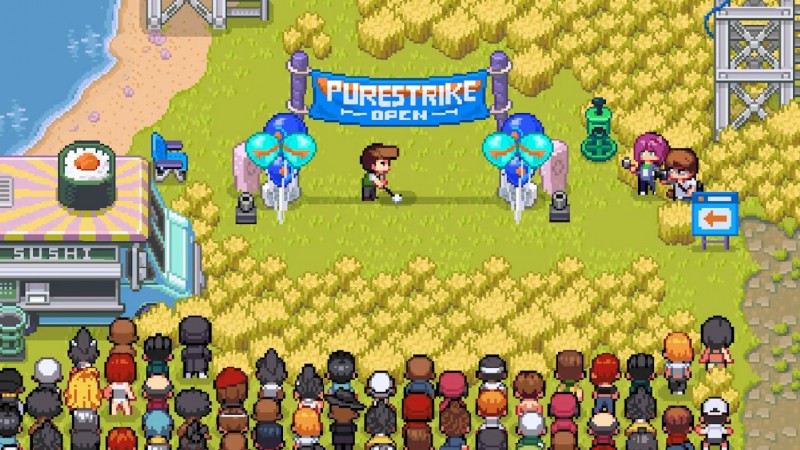 Golf Story was one of the biggest surprises in the Switch’s extremely strong first year on the market. Thanks to Golf Story’s charming, nostalgic presentation and novel sports/RPG fusion, Sports Story has long been one of my most anticipated sequels. Unfortunately, its unfocused nature and frustrating gameplay are only overshadowed by a pervasive lack of polish that prevents Sports Story from being worth your time.

As the name suggests, Sports Story expands the world to include other games while creating a more sweeping and ambitious story. As sports go, golf remains the most prominent; everything in the story is told through the lens of a golf-crazed world, and that often plays to the title’s strengths. Stepping back onto the links, selecting the right club and ball for the job, and teeing off across the eight courses on offer (as well as dozens of minigames) is still as fun as it was in the previous title. The approachable three-click meter usually plays well, and considering the distance, surface, and wind direction to deliver a perfect shot never ceases to satisfy. In these fleeting moments, I’m reminded why Golf Story was such a success. Sadly, despite golf being the best sport in the game’s stable, the less-enjoyable sports and tedious story too often distract from this glaring strength.

Sports Story adds activities surrounding BMX, tennis, cricket, volleyball, fishing, running, and baseball, but only a few are more than diversions. Tennis takes up perhaps the most time, but it doesn’t live up to golf’s superb blueprint. In addition to requiring far too precise character placement and swing timing, I also encountered moments where the game would simply give the point to my opponent, even when I clearly scored. The other sports are mostly relegated to minigames, with BMX serving up a mix of enjoyable races against the clock and frustratingly tough obstacle courses. Each time a different sporting event appeared, it made me glad when Sidebar Games returned to the world of golf.

Sadly, the story side of the equation is not much better than the sports side. On top of that, it takes up a disproportionate amount of the more than 20 hours I spent in-game. Where Golf Story used this part of its game to lay on the charm and humor, Sports Story’s dialogue is mostly tedious and unfunny. Save for a few enjoyable bits, the jokes fell flat most of the time, and I never felt invested in the narrative arcs. Not only that, but the constant reliance on fetch-quests meant I spent too much time trying to find the abstract solution of who I was supposed to talk to or what I was supposed to interact with. The more focused dungeons have some simple-yet-enjoyable golf-focused puzzles, but they’re only a small percentage of the overall time spent exploring.

An unignorable lack of polish accentuates all these problems. I rarely went more than a couple of hours without the game crashing me back to the Switch home screen, and on a couple of occasions, I lost a significant amount of progress. Perhaps more substantially, the game doesn’t run well; the frame rate drops and gameplay stutters are annoying when I’m exploring the overworld, but when they happen in the middle of the timing-based backswing in golf or precise gameplay of tennis, they result in me missing a pivotal shot or losing a point. These ever-present problems combine with less frequent issues like quests not properly completing, dialogue not triggering, and my character clipping through the environment, truly hammering home just how buggy Sports Story is. At one point, my character began levitating over the map when I went to cast my fishing rod, allowing me to bypass blockades and essentially break the mission progression chain.

Even if Sports Story was polished and bug-free, it would still fall strikingly short of the first title in the series. The new sports don’t play well, the fetch quests are tiresome, and the story is tedious and less charming than that of Golf Story. What remains of the retro golf experience is fun, but the whole game feels like a textbook example of being unable to deliver on lofty ambitions.