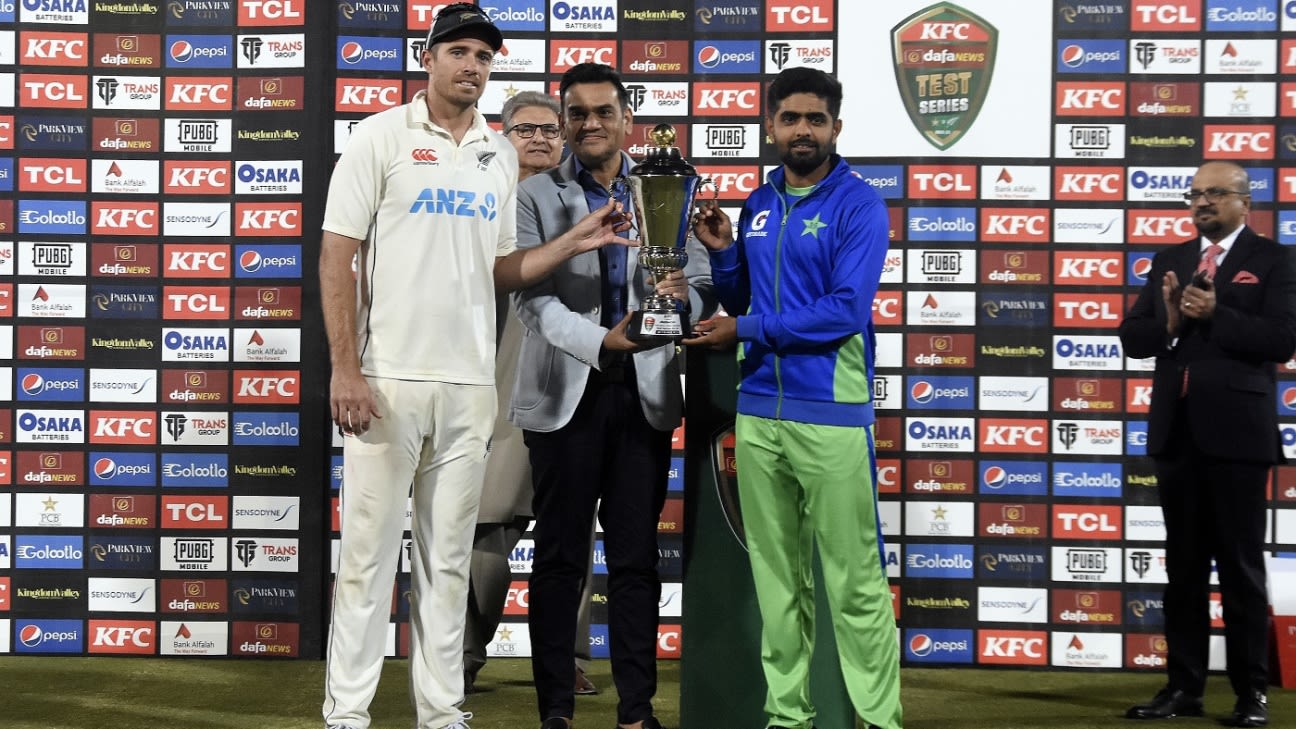 There was but one member of this New Zealand squad on tour in Pakistan to have ever played cricket in the country, and that was their batting coach. Even so, they were “one ball away from series victory” and the captain Tim Southee took a lot of heart from that.
Karachi provided conditions that made batting and bowling a hard graft, so much so that both Test matches only really came alive on the final day. Last week, an odd declaration from Babar Azam gave New Zealand the chance to nick a win after it seemed like they had been batted out of the game. And on Friday, they had Pakistan at 80 for 5 in a chase of 319. They weathered Sarfaraz Ahmed‘s brilliant counterattack. And in the dying light, became the only team with any chance of victory.

“You play to win Test matches and we got ourselves in, probably, positions to win both of them,” Southee said at the post-match press conference. “It was pretty tough going but the guys toiled away and we were one ball away from a series victory. So yeah, disappointing to walk away [0-0] and I’m sure Pakistan are the same. You walk away, you toil away for 10 days and a drawn series. So yeah. A lot of good cricket was played in and amongst those 10 days.”

Southee: ‘Surfaces were tough to score runs on’

When the umpires had to take the players off the field for bad light, New Zealand were one wicket away from victory, and Pakistan needed just 15 runs. Southee, captaining for the first time in Test cricket in this series, was asked whether he had any regrets about the timing of his declaration. He gave his team 93 overs to take 10 wickets. They got in 90, and took nine, before the game was called off.

“We felt the surfaces was still a pretty good surface if you wanted to just bat,” Southee said. “Tough if you wanted to score runs. So it was a bit of a balancing act to try and get the right amount of overs left and the right amount of runs. And I guess to get a little dip at them [2.5 overs] last night and get them two down, that was a great start.

“I guess you always look back and there’s ways you could improve and you could get better with hindsight. But that was a decision we made at the time. The guys that were batting felt that it wasn’t easy to just go out and hit the ball. So it was one of those ones that you had to weigh up. Last night we declared and made the most of the three overs we had. But it was one of those decisions you make with discussions around how the batters are feeling, what the surface is doing and what you think is right at the time.”

Sarfaraz made us delay the second new ball, says Southee

The biggest stumbling block in New Zealand’s road to victory was Sarfaraz. Making a comeback to the Pakistan team for the first time in nearly four years, he found a way to score fluently in conditions that weren’t really conducive for that. Sarfaraz finished with 118 runs at a strike rate of 67 and slowing him down was of such importance that New Zealand denied themselves the second new ball, worried that it might come onto his bat better. Pakistan were 267 for 6 after 80 overs, 52 shy of their target.

“With the two batters still in, Sarfaraz and [Agha] Salman, we felt that runs could have come quickly,” Southee said, “And I think that’s a build-up of the way Sarfaraz played through the day, which delayed us taking the new ball. If he hadn’t played as positively as he did through the day, then we would’ve been able to take the new ball when it became available and had a lot more runs to play with. So again it was a bit of a balancing act. If you take the new ball, it may come on a bit easier and we were just trying to manage how to get through that partnership, which we did. We were able to take that new ball and get another couple of wickets. So yeah, its a fine line and you go on a bit of a gut feel what you feel is right at the time along with the other leaders in the group.”

Southee happy for the Karachi fans

This was New Zealand’s first tour of Pakistan in 19 years and although the result didn’t go their way, Southee was happy he was part of the entertainment.

“Dunno if I rate draws,” he said. “But yeah it was an exciting finish. I hope that the people watching enjoyed the end there. It was nice to see a few people through the gates at the end there, a bit of an atmosphere around. It would’ve been better to win but I guess for the people that were watching, I hope it was exciting.”

“We’ve really enjoyed our time here so far. It’s a place a lot of the guys haven’t been. We’ve been welcomed very nicely and the guys have enjoyed it and we’re now looking forward to the one-day series.”