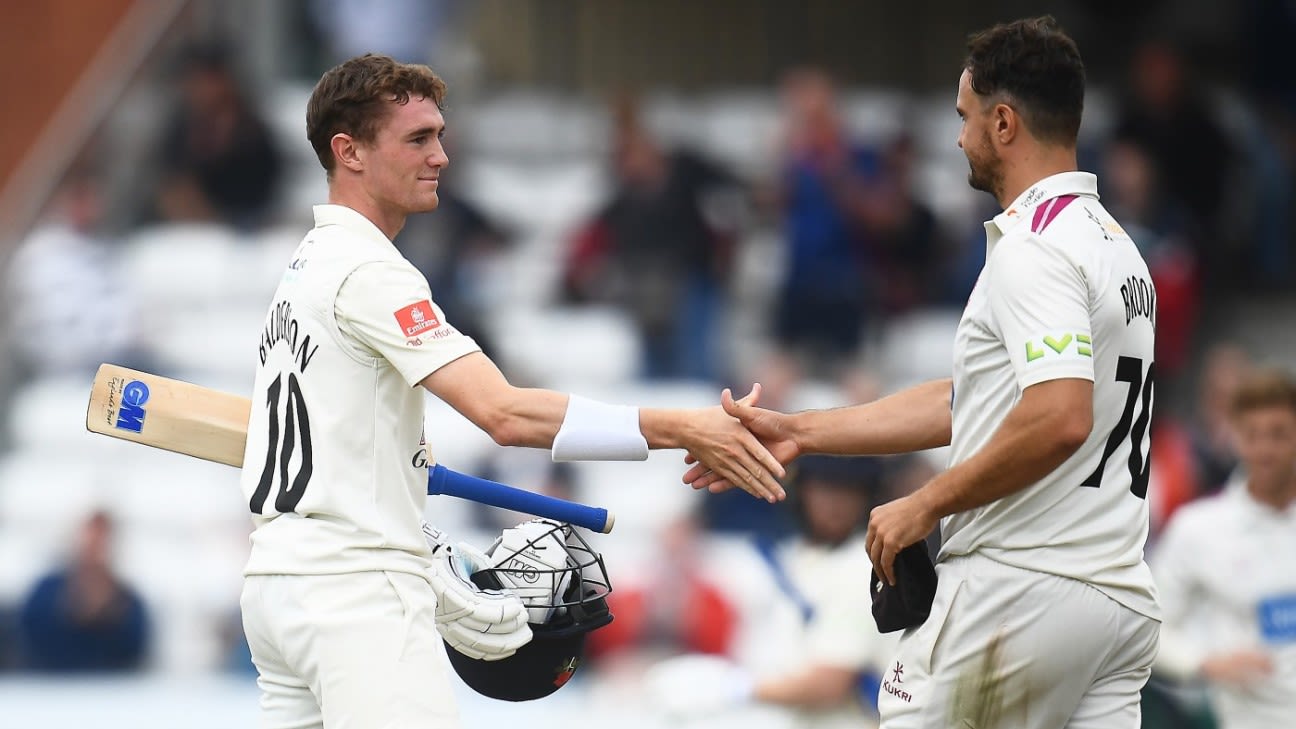 The statisticians from cricket’s black museum were out in good numbers at Taunton today. “When did it last happen,” they asked, “that a side won three successive tosses and yet lost all three games by an innings?” You probably needed to support Somerset to risk such enquiries at the County Ground, especially on a morning when the floodlights were on and the gloomy skies matched the mood of a few locals. Autumn advances.

Lancashire advanced, too, although not quite so quickly as to have us searching through the records of successive innings defeats. Nevertheless, the umpires took advantage of the regulation that allows them to delay the luncheon interval by four overs if a result is in prospect and by 12.35 Alex Davies and George Balderson had completed the ten-wicket victory that will leave their side with, at the very least, a mathematical chance of winning the title when they play Hampshire at Liverpool next week. Whether Lancashire’s position is even healthier will depend mainly on the result at Southampton but also on the outcome at Headingley.
For the moment Dane Vilas can be heartened by the skilful, confident cricket his side played over seven sessions at the County Ground. However the season ends this Lancashire team loses nothing by comparison with the one that won the title at Taunton a decade ago although Vilas hears and honours the echoes of those four distant days. “The team that won the title played a lot of their cricket at Liverpool and I hope we can replicate what they achieved,” he said. “We know we have to get a victory next week but the Championship is the hardest competition and all the players want to win it.”
That desire was evident again this morning as Lancashire’s seamers took Somerset’s last six wickets for the addition of 88 runs, thereby leaving only the formalities to be completed by their opening batsmen. Any serious hopes that the home side might set a testing target disappeared in the first eight overs of the day, first when James Hildreth tried to pull a shortish ball from Tom Bailey but only skied a catch to point and then when Lewis Goldsworthy was skewered on the back foot by the same bowler with a ball that nipped back. The cheery blows that followed may have heartened the remarkably large crowd but they did nothing to affect the going rate for fresh haddock.
Jack Blatherwick completed a memorable match for him by taking two further wickets and Balderson picked up a couple more. However, by far the biggest cheer of the day came from the Somerset supporters when the innings defeat was avoided. Any tokens of misery were purely coincidental. The scoreboard in the corner by Gimblett’s Hill went completely black although that was caused by mechanical malfunction rather than contagious mourning.

Somerset, of course, have played some pretty dreadful cricket over the last fortnight and one was therefore pleased that they managed a better showing in the second innings of this match. Andy Hurry, the county’s director of cricket, faced some fairly searching questions after it all but he took his bottom hand away when quietly defending his players and such occasions should always be placed in context. Hurry is a former Royal Marine and has therefore been trained to kill enemies of the Crown. An inquisition from a gaggle of hacks is unlikely to chill his blood.

In any case Somerset have the Vitality Blast Finals Day ahead of them and spectators leaving the County Ground late this afternoon will have been encouraged to see Craig Overton bowling a few overs in preparation for Saturday. But there will be no more first-class cricket on this famous field until next April and it is the four-day stuff that matters most to the vast majority of players on the circuit. One could be sad at the sight of the almost deserted ground until one recalls that only a year ago cricket was being played before equally empty stands. The game came through those horrors and it will come through another winter. The good folk on Gimblett’s Hill will settle for nothing less.